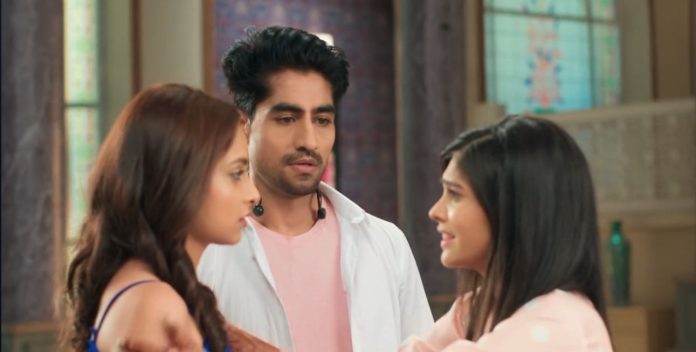 Yeh Rishta Abhi huge surprise 26th April 2022 Update Goenkas are seen making preparations for Akshara and Abhimanyu’s wedding. Swarna asks Suhasini to help her in checking pooja items and gifting items as they should not be left behind. Akhilesh says Aarohi will handle it. Suddenly, he realizes that Aarohi won’t be a part of Akshara and Abhimanyu’s marriage. Everyone looks at Akhilesh. Manish says it doesn’t feel good thinking that Aarohi won’t be a part of Akshara’s wedding. Akhilesh reminds Manish that he himself agreed for Abhimanyu’s condition. Manish says what he would have done. He says his love for Aarohi is at its place but he also has to consider and support the right thing and person.

Manish refuses when Swarna requests him to talk to Abhimanyu once. Everyone gets into thinking. In her room, Akshara sees Aarohi’s jewelry and cries. She says that she might never be able to make Abhimanyu understand how much Aarohi matters to her. Suahsini comes to Akshara and the latter hugs the former. She understands that Akshara is feeling that her happiness is incomplete without her sister, Aarohi. Suhasini explains to Akshara that some time in life a person has to choose between his/her two lovable and dear things, but it doesn’t mean that the person loves one thing more than the other one.

Akshara asks Suhasini what if she wants both. Suhasini explains to Akshara that then she needs to wait for the right time and make God again and again recall that why she wants both. She asks Akshara to wipe her tears and pack all her things by counting them as nothing should be left behind. Suhasini gives small cutouts of Naira, Kartik and Sirat to Akshara. Akshara cries and says that she can’t take her parents with her but now isn’t able to even take Aarohi with her. Suhasini tells Akshara that she forgave every crime of Aarohi since childhood and supported her in everything. She also tells Akshara the word step-sister is considered abusive in society but she has respected her step-sister even more than she has respected her real brother.

Akshara tells Suhasini that she wants her and Aarohi to love each other and have a bond with each other like that of Lord Ram and Lord Lakshman. Suhasini tells Akshara that she will surely receive the reward of her penance. Akshara requests Suhasini to do something as she is feeling uncomfortable getting married without Aarohi. At Birla house, Abhimanyu, Harsh and Mahima are seen busy in explaining and handing over their office work to their colleagues till they return from Akshara and Abhimanyu’s marriage. Manjiri requests Mahima to check the shagun list once. Mahima tells Manjiri that she is busy with other work. Neil helps Manjiri in checking and tallying the shagun list.

Abhimanyu recalls how Aarohi took her right to apply shagun mehendi on Akshara’s hand. Suhasini calls Abhimanyu and the latter asks Suahsini to say what she wants to. Suhasini stutters and indirectly tries to make Abhimanyu understand that Aarohi is very important for Akahara and she is feeling incomplete without her. Abhimanyu recalls Akshara’s words trying to explain to him that Aarohi is very important for her. He runs to Manjiri hearing Neil’s scream. Everyone, especially Abhimanyu gets worried for ill Manjiri. Manjiri tells Abhimanyu that she will rest for the whole day, every day, once he gets married. At night, Abhimanyu and Akshara talk to each other. They discuss that they will have Abhira fairy tale wedding.

Abhimanyu three times asks Akshara if she wants some gift from her or wants him to fulfill any incomplete wish of hers. Akshara tells Abhimanyu that she is already getting everything from him and doesn’t want anything else. Abhimanyu tells Akshara that he wants to hear a song from her. Akshara tries to sing for Abhimanyu’s happiness but fails. Abhimanyu tells Akshara that it’s fine as her sleep is more important for him than his own restlessness. He asks her to go and sleep. Akshara sees Aarohi sleeping. Later at night, Aarohi recalls Abhimanyu’s harsh words to her and his condition for his and Akshara’s marriage.

Aarohi says this isn’t done and is unfair to her. She decides to leave Goenka Mansion. Next morning, Akshara wakes up and finds Aarohi missing from bed. Akshara receives Abhimanyu’s message asking her if she is fine and if she slept peacefully. She calls Abhimanyu and gets busy talking to him. In between her eyes goes towards the wedding gift kept by Aarohi for her. She then reads Aarohi’s letter, which she left before leaving home. Everyone gets worried hearing Akshara’s scream and runs to her. On the other hand, Abhimanyu also gets worried for Akshara on hearing her scream from the video call.

Akshara gives Aarohi’s letter to Swarna. Swarna reads the letter and everyone gets shocked and worried, knowing that Aarohi left home and wished happy married life to Akshara. Everyone tries calling Aarohi her contact number comes switched off. Vansh and Kairav leave to search for Aarohi. Akshara blames herself for Aarohi leaving the home. Abhimanyu hears everything. At Birla house, Harsh tells Anand that he is thinking of taking 2-3 cars of theirs as it will be difficult for them to tolerate Goenkas for such a long time. Anand asks Harsh to get habitual of Goenkas as now he will have to tolerate them for whole life. Harsh tells Anand that he is right.

Shefali tells Parth that she convinced her boss to give her leave for Abhimanyu’s marriage. Parth in a taunting tone thanks Shefali for doing a favor on him. Shefali asks Parth why he is taunting her. Parth tells Shefali that he is not taunting her but instead appreciating her for getting leave for his brother’s marriage. He asks Shefali if Abhimanyu isn’t related to her anyhow. Shefali tells Parth that he is talking rude to her these days. Both continue their argument but finish it. After this Manjiri asks Birlas if they saw Abhimanyu somewhere. Everyone gets into thinking about where Abhimanyu went so early in the morning.

Goenkas keeps trying to search for Aarohi. Akshara blames herself for Aarohi’s sudden decision to leave the house. Everyone explains to Akshara that she isn’t at fault anywhere in this as she didn’t force Aarohi to leave the house. Akshara says Aarohi doesn’t even have any idea about living alone as she has always lived with family. She says Aarohi doesn’t know how it feels to live alone. Kairav and Vansh return and say that they didn’t find Aarohi anywhere. Akshara requests to find her sister and bring her back. Swarna asks Kairav to handle Akshara as she is crying profusely since long. Kairav tries to calm Akshara.

Abhimanyu arrives at Goenka Mansion singing, “Ek Hazaaron Mein Meri Behna Hai”. Akshara gets scared seeing angry Abhimanyu. She recalls Abhimanyu’s harsh words to Aarohi for hurting Manjiri. Akshara also recalls Abhimanyu’s condition for their marriage. She tries controlling her tension and tears. Abhimanyu politely asks Akahara to relax and breathe properly. He apologizes for coming in between and says he won’t come in between anymore. Abhimanyu moves a little to show Aarohi standing behind him. Akshara runs to Aarohi and hugs her tightly. Swarna asks Aarohi where she went.

Akhilesh tells Aarohi that everyone went tense for her. Manish says Aarohi doesn’t care about anyone. Kairav asks Abhimanyu, where he got Aarohi. Aarohi tells everyone that Abhimanyu tracked her with her pager as it was in her bag. Akhilesh scolds Aarohi for her wrong step and move. He tells Aarohi that Akshara was very tense about her and cried profusely for her. Abhimanyu tells Akshara that he knows that she chose him wholeheartedly but she is feeling incomplete without Aarohi. He tells Akshara that he doesn’t want her to marry him with sadness and incomplete feeling in her heart.

Abhimanyu tells Akshara that her happiness is more important to him than his own decision. He says Aarohi can attend his and Akshara’s wedding. Except Aarohi everyone feels happy and proud of Abhimanyu’s decision. They feel thankful towards Abhimanyu. In the next episode, the whole Goenka family will be seen pampering Akshara as it will be her last day at Goenka house. Akshara will get emotional while taking selfies in Goenka Mansion. At Birla house, Abhimanyu will request Birlas to make it simple for Akshara to live in Birla house as she will be coming to Birla house after one day (after Abhira wedding). Mahima will ask Abhimanyu to let them do what they want to, if he wants no more trouble in his and Akshara’s wedding.

Reviewed Rating for Yeh Rishta Abhi huge surprise 26th April 2022 Update: 3/5 This rating is solely based on the opinion of the writer. You may post your own take on the show in the comment section below.