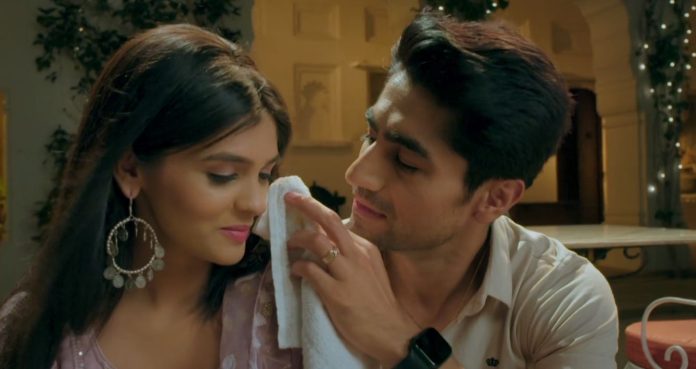 Yeh Rishta 29th April 2022 Written Update Akshara goes missing Abhimanyu and Akshara are seen enjoying the pool. They see Harsh walking nearby and dives inside the pool to hide. Abhimanyu says elders always arrive at the wrong time. Akshara asks Abhimanyu to wear his shirt before anyone else casts his/her evil eyes on him. Shefali asks Mahima and Manjiri why they are walking with a turmeric plate in their hand, instead of resting. Manjiri tells Shefali that according to their ritual, Akshara will grind this turmeric and make its paste, which will be applied to Abhimanyu.

Abhimanyu overhears this and asks Manjiri if Akshara will really have to grind this large amount of turmeric. Mahima tells Abhimanyu that Akshara will have to grind the whole amount of turmeric with her hands, as they too have some rituals. Abhimanyu asks Mahima to get the turmeric grinded in the mixer as otherwise Akshara will get tired. Mahima tauntingly asks Abhimanyu to take pheras on bike as otherwise Akshara’s feet will get tired. Manjiri signs Abhimanyu to stay calm. Mahima asks Abhimanyu why he has a problem with their ritual as he only told them that Akshara wants a traditional wedding with all the rituals performed.

Abhimanyu apologizes, Manjiri, Mahima and Shefali leave. Abhimanyu feels apologetic towards Akshara. On the other hand, Goenka women get shocked when Birla women explain their ritual to them. Mahima tells Goenkas that Akshara will have to perform it as it’s their family’s ritual. She reminds Goenkas that they even got beaten by mango leaves in the name of rituals. Suhasini says that she never heard of such a ritual. She also says that according to their old rituals, the groom’s applied haldi is applied to the bride. Mahima asks Goenkas to follow their ritual and after that they will follow their ritual. Manjiri requests Goenkas to keep respect for Mahima’s words.

Akshara tells Manjiri that it’s fine, she will perform their ritual. Abhimanyu runs to the place where Mahima is explaining their family ritual to Goenkas. He mixes a wet turmeric piece in the plate of the rest of the turmeric pieces. In a low voice, Abhimanyu challenges Akshara to find his name written in turmeric pieces, before the haldi ceremony. Manjiri asks Abhimanyu and his male siblings to go outside. Abhimanyu gets naughty but Manjiri sends him outside anyway. Manish, Akhilesh and Aarohi meet their acquaintances, Mr. and Mrs. Khaitan in the resort premises. They misunderstand that Aarohi is getting married to Abhimanyu and congratulate her with her family.

Manish clears Mr. and Mrs. Khaitan’s misunderstanding by telling them that their elder daughter Akshara is getting married to Abhimanyu, not Aarohi. Mr. Khaitan apologizes to Manish for their misunderstanding. Manish tells them it’s fine and asks them to come and bless the bride and groom. Mr. and Mrs. tell Manish that they have to go to the event they actually came for. Aarohi excuses herself from everyone. She overhears Mr. and Mrs. Khaitan, discussing and wondering why Abhimanyu chose Akshara instead of Aarohi, who is a doctor like Abhimanyu. Aarohi feels that now everyone will find fault in her because Abhimanyu chose Akshara and not her, who is a doctor.

She wonders how she can be so ill-fated. Aarohi gets determined to do something to change her fate and regain her status. She thinks that she can’t spend her life like a loser. On the other hand, two bad boys eye Akshara with evil intentions. Akshara feels discomfort and walks past ignoring them. Abhimanyu gets angry seeing all this. His anger increases, when evil boys call Akshara an eye candy and wishes to get her. Abhimanyu runs behind Akshara till the terrace door. Later, Akshara is seen grinding turmeric on the terrace using a stone grinder. Swarna, Suhasini and Aarohi are seen sitting near Akshara.

Swarna asks Suhasini to see that Akshara seems exhausted. Suhasini says Akshara even has to wake up early the next day. Swarna says Mahima got adamant about her family ritual, otherwise they would have just got 2-3 pieces grinded by Akshara and rest in the mixer or themselves. Suhasini tells Swarna that she feels that Mahima is intentionally taking revenge from them. Akshara asks Suhasini to let it go as she is doing all this for ritual and Abhimanyu. She also asks Suhasini, Swarna and Aarohi, if any one of them can prepare and segregate her ceremonial clothes and jewelry according to all ceremonies and functions. She says everything is mixed right now.

Swarna reminds Akshara that she already asked her to pack everything separately from home only. Akshara apologizes to Swarna and tells her that she failed to pack everything separately as stuff was too much and time was less. Aarohi volunteers to help Akshara. Swarna and Suhasini leave with Aarohi to do Akshara’s work. Akshara feels someone behind her. She recalls two boys eying her with evil intentions in the corridor. In fear, she shouts Suhasini’s name to call her and is about to attack the person behind her with her turmeric grinding stone. Abhimanyu stops her and tells her that it’s him.

She sits down and continues grinding turmeric. Later, Akshara gets scared seeing evil boys staring at her from behind. On the other hand, Neil and Parth tease Abhimanyu, seeing him exercising during his wedding celebrations. Shefali comes and tells Parth that she isn’t able to unlock the suitcase as he changed its password. She reminds Parth that she asked him to not change password as she can’t remember. Parth tells Shefali that she doesn’t remember him as well. Shefali asks Parth to not always taunt her about being busy. Parth leaves with Shefali saying goodnight to Abhimanyu and Neil.

Abhimanyu calls Akshara but it doesn’t get received. He thinks that Akshara went to sleep. On the other hand, Akshara tries to escape evil boys. Goenkas discuss that from tomorrow they won’t get time to spend with Akshara. Akshara on the other hand is seen stuck in trouble. Kairav goes to meet Abhimanyu. He requests Abhimanyu to help Akshara build good relations with his family after marriage. Abhimanyu assures Kairav that Akshara will always have his support. Kairav explains to Abhimanyu that they don’t need support to fight with relations but to make them stronger. He tells Abhimanyu that he and Akshara have been unlucky when it comes to some relations.

In the next episode, Mahima and Suhasini will argue about their rituals. In anger Mahima will cancel the haldi ceremony, shocking everyone. On the other hand, Aarohi, Abhimanyu, Kairav and Vansh will be seen tense with Akshara’s sudden disappearance. Aarohi will say that she didn’t find Akshara even after checking all the rooms two times. Abhimanyu will say that he didn’t find Akshara even in the parlor and spa. Everyone will get worried with Akshara’s sudden disappearance. Akshara on the other hand will be seen stuck in a room.