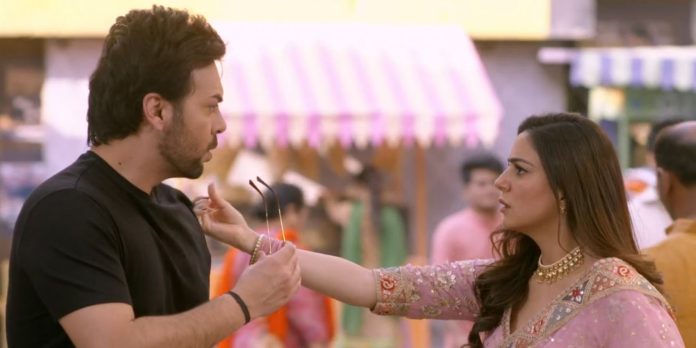 Kundali Bhagya 4th May 2022 Written Update Amazing twist Sameer shouts on Prithvi. He tells Bani that Prithvi has defamed Karan, he has framed Karan in the match fixing blame. He yells at Prithvi. He also loses control on his anger and begins bashing up Prithvi. Kritika gets in between to save Prithvi. Prithvi defends himself. He tells that if Preeta has told this to Sameer, then she is making a big mistake. He reminds the Luthras how Preeta had been playing with their emotions, Mahesh was doing fine in the basement, but Preeta got him to the family, then defamed him by proving him mad. He tells that she was adamant and wanted to just get ahead with it. He shouts that Preeta won’t care if Mahesh is dead or alive, it won’t matter to her if Mahesh dies. She stops him from speaking evil and slaps him. The Luthras are shocked by the sudden slap drama.

Prithvi tells that Preeta can never catch him. He asks Sandesh to just leave the city. Preeta wants to find out who is the culprit, why is he after Karan. Karan tells Malkhani that he suspects Preeta. Shrishti tells Sameer that Luthras are fools and can’t know the fraud people. He accuses her for cheating his family. Shrishti tells that Preeta took the property from Prithvi to save the family. Prithvi asks Sandesh not to show his face again. Preeta catches Prithvi and is shocked by the discovery. She realizes that Prithvi has framed Karan.

Preeta catches Prithvi and asks him is he the one who got Karan arrested. She asks did he meet Sandesh, who the police is searching for. She realizes that Prithvi is the real culprit. He asks her to stop following him, he doesn’t know any Sandesh, she is totally wrong. He denies to know about Sandesh. Preeta asks him to stop acting. She tells that she will get him arrested now by proving Karan innocent. He asks her if she accepted that she wants to save Karan. She asks him to think anything he wants. He tells that Karan doesn’t value her, there is no use to save him, Karan feels she has framed him. He tells that he will not become the hurdle for her. She asks him to get lost. He leaves from there.

Preeta wishes that Karan supported her. Karan tells Malkhani that he doesn’t trust Preeta. Sameer blames Shrishti for letting down his family. Shrishti reminds him the family condition before Preeta came back home. She tells that he knows the truth in his heart but he isn’t able to accept. She asks him to listen to her carefully, Preeta left the city and came back after two years, she tried to go to clinic and came across Mahesh, who pleaded for help, so Preeta decided to come back to the Luthra family, she had become the owner of the Luthra family just to save Mahesh, she got Mahesh out of the basement, she changed the nurse who gave him wrong medicines.

She tells him that Prithvi used to ill treat the family, but Preeta got the entire family to the dining table, she gave them freedom, she is just the owner for namesake, but she has done her duties as a bahu. She reminds him Karan’s condition. She tells that Preeta has challenged Karan and brought his fire and passion back in him, she wanted him to give his best in the matches, she used reverse psychology to get his best out, she supported Karan and the family. She asks Sameer why didn’t he trust Preeta. He tells that Preeta will care for Mahesh, because she got the property from him.

He asks Preeta to tell the truth to the family. She tells that the family will never believe her, everyone misunderstands her and insults her, even then she loves them, she has come to the family with a mission, she can’t let Prithvi get all the property and business back. She defends Preeta. She tells him about Maddy, he is an undercover private investigator, he is working for Preeta, he is trying to find evidence in Karan’s favor, Maddy told Preeta that he got some pictures that can help them find Sandesh. She asks him to check about Maddy on internet. Sameer feels ashamed of himself. Shrishti tells him that the entire plan flopped, they were going to catch the mastermind today. Preeta returns to the café and meets them. Sameer asks why didn’t she tell him that she is doing this for Karan.

She tells that he didn’t trust her. Shrishti regrets that they missed the mastermind. Preeta tells that she has seen the mastermind’s face, its Prithvi. Sameer and Shrishti are shocked. Prithvi finds Natasha making her dance videos. He calls Sherlyn to his room. He asks Sherlyn what is Natasha doing with them in the house, she is useless for them and shouldn’t be here. He wants Sherlyn to throw out Natasha. He doesn’t want to see Natasha. Sherlyn thinks what’s the matter that he is getting so hyper. Natasha hears them and thinks she will deal with Preeta this time and expose Prithvi’s truth. She wants to tell Preeta that Prithvi has framed Karan.

She rushes to Preeta and tells him that Prithvi is the mastermind, he has sent Karan to jail on the wrong charges. Preeta tells that she already got to know this truth. She adds that she will oust Prithvi, Sherlyn and Natasha as well. She lectures Natasha. Sameer angrily enters the house. Shrishti tells that Sameer can do anything wrong. Sameer angrily bashes up Prithvi. The family stops him. Sameer shouts that Prithvi has framed Karan. The family is shocked. Prithvi defends himself. He lies that he had seen Preeta with Karan’s fan, who framed Karan by bribing him for match fixing. Preeta calls it a lie. She tells that its Prithvi’s lie, Prithvi has done a crime, he has hired Sandesh to frame Karan.

She accuses Prithvi in front of the family. Prithvi tells that she has made a great story, she wanted to break the family and she has done that now. He asks her if she didn’t care for Mahesh’s life and death before. Preeta gives him a tight slap. The family watches the drama. Preeta warns Prithvi to not take Mahesh’s name. Kareena supports Prithvi. She madly accuses Preeta for their troubles. Sameer tells them that Preeta didn’t lie to them, Prithvi has framed Karan, even he has seen Prithvi with Sandesh. Preeta tells Prithvi that she told the truth to Sameer.

Prithvi cleanly lies to them. He puts the blame on Preeta. Shrishti asks Prithvi not to blame her sister. Sherlyn asks Sameer how did he change his mind so soon. She doesn’t want to believe him. Kareena tells that Shrishti has brainwashed Sameer, he is a fool to believe her. Preeta asks them if they have their own mind to think. She doesn’t have time to explain them anything. She wants to help Karan. She asks Shrishti to be careful that Sameer and Prithvi don’t fight further.

Reviewed Rating for Kundali Bhagya 4th May 2022 Written Update Amazing twist: 5/5 This rating is solely based on the opinion of the writer. You may post your own take on the show in the comment section below.