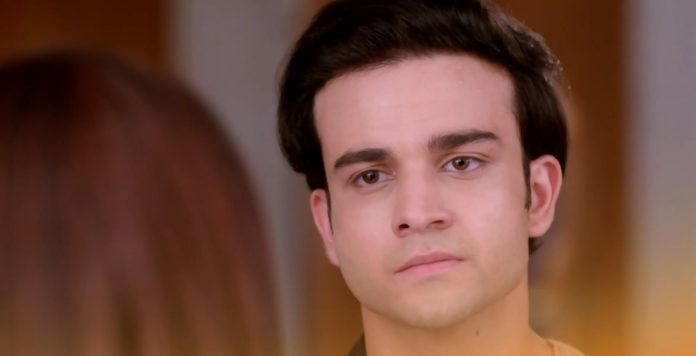 Kumkum Bhagya 12th May 2022 Written Update Ranbir stuns Vikram and Dida are shocked to know that the police has come to arrest Prachi by discarding the time given to Prachi to prove her innocence. Vikram wants Prachi to make some plan and prove herself true. Inspector tells that Prachi can make a plan against Rhea and harm her, if she wants to prove her innocence, then she can hire a lawyer and detective to do so by staying in the lockup. He tells that Ranbir can save Prachi from the arrest by proving that Prachi didn’t want to harm Rhea, but him, and he has no issues and complains with the attack planning on him. Prachi feels conned. She doesn’t realize that Ranbir is trying to save her. Ranbir keeps it a secret that he has hired Bijoy to work on Prachi’s case and find a proof of her innocence.

Detective Bijoy finds the cctv footage where Prachi is seen leaving from the house at the time when Rhea fell down the balcony in the Kohli house. Ranbir gets the evidences in her favor. He reaches home in time when the police is taking a handcuffed Prachi to the police station. Ranbir asks the inspector to leave Prachi free because she is innocent. He presents the proofs in her favor and saves her. Will Prachi realize his love and believe him for once to make up her mind and reveal her pregnancy to Ranbir, before he finds it out himself and gets heartbroken by her prolonged silence. What do you think Prachi should do? Comment below and keep reading.

Earlier in the show, Aaliya meets Shahana and asks he to call Prachi. Shahana asks the reason. Aaliya tells them that police has come to talk to Prachi. Inspector tells Vikram that he has come to arrest Prachi. Dida asks him how can he arrest Prachi when he has given her five days time. Inspector tells that he had given her time, but she will stay in police custody, Ranbir should prove that Prachi wanted to harm him and he doesn’t want to file any case against her, only then Prachi will be spared.

Inspector questions Prachi if she got any proof in the attempt to murder case, against Rhea. He asks her if she could prove her innocence. Vikram asks him to give some time. Inspector tells that he got an order from the department, and now Prachi needs to get arrested. Rhea taunts Prachi that its better to go early to the jail. She asks Prachi not to rush to come back. She asks Inspector if there is a bed for Prachi in the jail. He tells that there will be just ground to sleep. Shahana requests him not to take Prachi. He apologizes. Prachi gets arrested.

Shahana tells that she will find some proof, still four days are there. Ranbir comes home and stops the police from taking Prachi. He asks Inspector to leave Prachi. Inspector tells about the strict orders to arrest her. Ranbir gives the proof of Prachi’s innocence. Inspector checks the proofs. Ranbir gets Prachi freed from the handcuffs. Prachi and Ranbir get into a moment. Her heart tends to him once again. Rhea asks Inspector not to leave Prachi, else she can get attacked by Prachi again.

Inspector tells that Prachi wasn’t at home at the time of the attack on Rhea, it will be sensible to arrest her Bua Aaliya, she is seen entering the house with the tool box. He asks them to take a look at the pictures. Rhea is shocked to know that Aaliya is caught in the camera. Aaliya lies that she got the tool box for work, not to kill anyone. Inspector tells that he doesn’t think that Prachi had planned this. Ranbir tells that he hired a private investigator to solve the case, the proofs are evident, Prachi can never attempt to kill Rhea. Inspector wishes him all the best.

Prachi looks at Ranbir with gratitude. Rhea goes to the terrace and talks to the moon. She feels lonely like the moon, but wants Ranbir in her life. She asks the moon if she should come to it, so that she can stay happy. She madly climbs on the railing and feels the breeze. Aaliya reaches there in time and shouts Rhea. She asks Rhea not to jump down. She pleads with her to get down and share her problems with her. She panics. Rhea stays calm. She tells that she isn’t thinking to jump down, her dreams will end with her if she jumps down.

She wants to fulfil her dreams. She asks Aaliya to help her get down. Aaliya hugs Rhea. She asks Rhea what was she doing. She is terrified seeing her madness. She asks Rhea not to attempt suicide again. Rhea tells that she isn’t going to commit suicide, she can’t think of it ever, she had attempted it before to scare people. Aaliya asks her whom was she showing it there. Rhea tells that she always needs an audience, she just went there to have a fresh air, it was amazing to stand over the railing, but later she realized that her hair are feeling sticky. She tells that she will go for a bath.

She admits that she loves Aaliya a lot, she wants same aunt in her next birth. Aaliya hugs her with love. Rhea tells that Aaliya is the best, she would have asked for same life if Prachi wasn’t there. Rhea goes. Aaliya tells that she really got tensed seeing Rhea in danger, just Rhea is there in her life, she will oust Prachi from Rhea’s life for the latter’s happiness. She promises Rhea. She sees Prachi and rebukes her for troubling Rhea. Prachi asks her what happened that she looks so tensed. Aaliya asks her to stay away from Rhea. She goes away. Rhea sees Prachi leaving from her room. She wonders what was Prachi doing in her room. She expects Ranbir to change his mind and feel attracted to her. She wants to look pretty to him.

Ranbir sees Prachi and asks her to not try and do something that she can’t do, else she won’t succeed. He heads to his room. Rhea finds her mangalsutra missing. She recalls that Prachi has entered her room at night. She thinks Prachi has taken the mangalsutra. She recalls their heated argument when Rhea blamed her for separating their parents by marrying Ranbir. Prachi told her that Rhea is selfish and will never stay happy with Ranbir, because Ranbir doesn’t love her, he will never love her. Rhea had boasted about her mangalsutra in front of her, and got challenged by Prachi.

Reviewed Rating for Kumkum Bhagya 12th May 2022 Written Update Ranbir stuns: 4/5 This rating is solely based on the opinion of the writer. You may post your own take on the show in the comment section below.