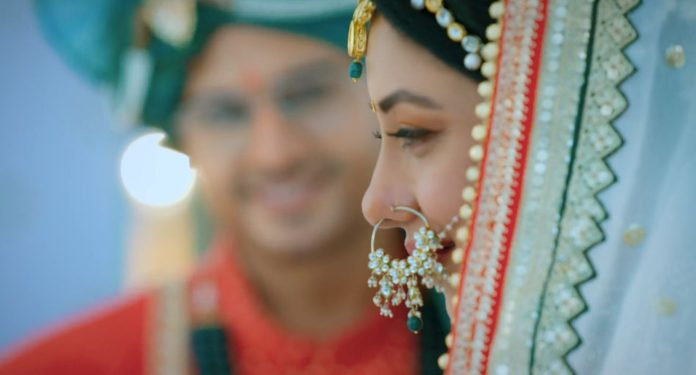 Kinjal says let this streak fade away. Everyone says no more waiting will be done and directly Varmala/wedding garland ritual will be performed. Anuj bends his head down and Anupama makes him wear the wedding garland. Anuj also makes Anupama wear the wedding garland. Elders feel like they have lit a diya in a love temple. Anuj and Anupama wipes each other’s happy tears. Paritosh goes behind Pakhi and asks her whom she is messaging in between important marriage preparations. Devika also comes there. Pakhi tells Devika and Paritosh that people on social media have made #MaAn groups and FD’s. When Devika misunderstands FD to be bank FD.

Devika, Pakhi and Paritosh keep reading MaAn’s fan’s comments about their wedding. They notice that fan’s have too much hate for Baa amongst them. Devika says Baa’s deeds are such. They also read fans calling Vanraj as forest king and expressing hate for him. Vanraj finds Samar standing behind him. He asks Samar if he also came to explain to him to become a part of Anupama’s happiness, forgetting everything. Vanraj says it’s easy to say but difficult to really forget everything. Samar tells Vanraj that he just came to take ritual coconut. He picks up the coconuts plate, turns towards Vanraj with hopeful as well as disappointed eyes and leaves.

Pakhi and Paritosh laugh with Devika. Anuj while sitting with Anupama at groom and bride chairs, speaks a romantic couplet for Anupama. Anupama gets shy and smiles. Rakhi asks everyone to start further wedding rituals quickly. This stuns everyone. Seeing everyone stunned, Rakhi tells them that she isn’t 24*7 vamp and has a heart like everyone. She says she also feels and wishes to enjoy such beautiful and emotional moments. Rakhi asks everyone to start the further rituals. Anupama reminds Samar to give medicine to Bapuji before proceeding with the ritual as it’s his medicine time. She sends Samar to bring Bapuji’s medicine.

Anuj requests Bapuji to sit and rest as he may get tired this way. He reminds Bapuji that he has to perform Anupama’s “Kanyadaan” too. Anuj asks GK to have a rest. On Anupama’s instructions, Paritosh brings chairs for GK and Bapuji. GK and Bapuji sit. Samar gives medicine to Bapuji. Kanta says that she has to wash Anuj’s feet as well as feed him panchamrit. As Mamaji jokes, Bapuji explains to him that it’s a ritual. Mamaji again makes a joke, making everyone laugh. Anuj and Anupama laugh together. Devika says the groom and bride are in sync. Anuj and Anupama objects to this ritual as they don’t believe in making a mother or mother-in-law touch their son-in-law’s feet.

Anuj asks Kanta to make him drink panchamrit and touches her feet. Kanta blesses Anuj to be happy. Both Kanta and Baa feed panchamrit to Anuj. Anuj and Anupama touch Baa’s feet too. Baa blesses Anuj and Anupama. This moment makes everyone emotional. Later, Bapuji and GK are seen explaining to Mamaji, Samar and Paritosh that they have to do an interesting, powerful and risky ritual. Samar asks them if they are talking about a bachelor’s party. Paritosh, Samar and Mamaji get happy thinking about this. Bapuji scolds them and asks them who does a bachelor’s party after Varmala ritual. Bapuji and GK laugh, when curious Samar, Paritosh and Mamaji keep asking them which ritual they are talking about.

After this, “Kaha Suni” rasam ritual is announced and explained. Dolly says champions of this ritual are Kavya, Rakhi and Baa. Kanta says new players like her have also joined champions. She reveals that in Anupama’s first marriage, Baa didn’t let her do this. Baa tells Kanta that now they are at the same party/side of the bride and will perform Kaha Suni ritual now. Anuj asks Baa to join his team for the Kahan Suni ritual. GK says no one will be able to defeat the groom’s team if Baa will join them. Baa shows anger initially but smiles later on. Rakhi chooses to be in the groom’s team for this ritual as people are less there. Hearing this, Mamaji asks to call Vanraj, saying that he is also champion in matters of, “Kaha Suni”.

Seeing everyone’s expressions, Mamaji says the people present are enough for the Kaha Suni ritual. Later, everyone starts performing Kaha Suni ritual. Everyone enjoys this ritual with hoots and laughs. Anuj tells Anupama that he is scared thinking if someone goes evil and serious in this Kaha Suni ritual. Seeing everyone fighting while performing this ritual, Anuj and Anupama stop them and announce that both groom and bride’s side won as both teams have mothers, who can’t ever be defeated. Anuj tells Baa that she is his favorite in Kaha Suni game and ritual as she is natural in it. Baa feels happy hearing this. Mamaji jokes making everyone laugh.

Reviewed Rating for Anupama Maan Wedding Finale 19th May 2022 Update: 5/5 This rating is solely based on the opinion of the writer. You may post your own take on the show in the comment section below.