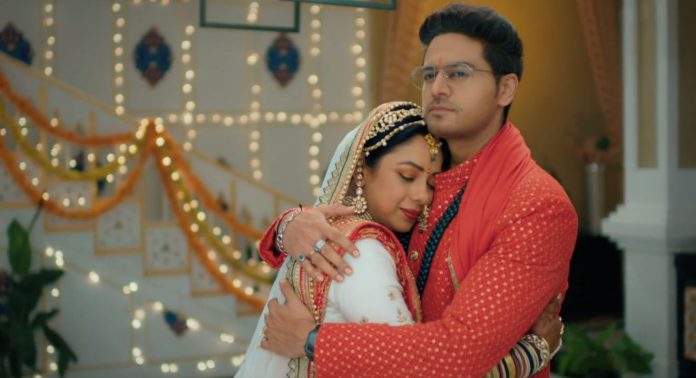 Anupama Amazing beginning 24th May 2022 Written Update Anupama asks Anuj what every family member is doing at his home. Anuj tells Anupama that he already told her that there will be no difference between their maternal and in-laws’ home. He says they have 3 maternal homes now. Mamaji asks which is the third one. Bapuji reminds him that Kanta’s home is also like Anuj and Anupama’s maternal home. GK tells Anupama that Anuj failed to see her sadness, which is why Anuj called him while sitting inside the car and asked him to bring children to Kapadia Sadan.

Devika tells Anupama that Anuj did car puncture drama as he had to give everyone the time to prepare for her welcome and shift at Kapadia Sadan. Anuj says Devika is saying anything. Dolly asks when both families together performed rituals at the marriage venue, then why not at Kapadia Sadan. Samar says they wanted to see where Anuj will keep Anupama with him. Paritosh asks Anupama to not worry as they will help her settle well at Anuj’s home. Pakhi says thanks to Anuj that their post wedding cry ended early as he called them at Kapay Sadan.

Anupama in a low voice thanks Anuj. Anuj in a low voice tells Anupama that he can see everything but not tears in her eyes. Anupama bends down to touch GK’s feet. GK asks Anupama to not do it again as she did it a lot of times during the wedding. Devika reminds Anuj and Anupama about them being middle aged. She teasingly tells them that they can hurt their waist by touching elders feet again and again and then won’t be able to perform further rituals. Anupama teasingly shows a slap to Devika, while Anuj asks Devika to talk about herself first. Later, GK gives Anuj’s mother’s jewelry to Anupama as Griha Pravesh’s shagun given to daughter-in-law.

Anupama tells Anuj that she can’t take such a big responsibility. Anuj gives his property and business ownership papers to Anupama. He tells Anupama that she can take and for sure, she will take decisions and responsibilities of the Kapadia empire and Kapadia Sadan. Anupama tells Anuj that till now she has just given the reason behind expenditures and now he is asking her to take care of all expenditures on her own. Anupama says she had to give a reason behind purchasing a Rs.100 stuff, ask for purchasing a rubber band and keep requesting with folded hands to get a broken slipper exchanged, earlier.

Anupama stutteringly tells Anuj that she can’t take such a big responsibility of handling a business of crores independently. Anuj tells Anupama that Kapadia Sadan’s Lakshmi will really be its Lakshmi, not just in words. Anuj signs the transfer papers and makes Anupama sign them too. Samar and Shahs feel relaxed seeing Anuj’s love and care for Anupama. GK asks Anupama to sign the first check of the office for shagun. Anun tells Anupama that she knows to fight for rights and claim the rights. He asks Anupama to start learning to handle her rights. Anuj says it’s time to handle the rights.

Kavya gets stunned seeing Anuj making Anupama sign the Rs.11,00,000 cheque. Samar says they will leave by making Anupama complete her “pehli rasoi”. Anupama says she will be the first bride whose Griha Pravesh is performed by both maternal and in-laws. She thanks Anuj for making her in-laws’ house, her maternal home. Devika says Anuj and Anupama’s wedding is really a rule-breaking family. Anupama says every family should perform rituals together like them. Anuj asks everyone to start preparing for rituals, till then, he will show Anupama, her new home. Anupama says she also wants to see her new home.

Everyone teases Anuj and Anupama. Anuj and Anupama leave to take a tour of their home. Anupama’s children and Kinjal feel positivity in Anuj and Anupama’s home. Bapuji talks to GK about his feelings as a father figure of Anupama. Kavya asks Devika why Anuj was living in a small flat, when he had such a big bungalow. Devika tells Kavya that people feel lonely in big houses. Kavya says people can get or feel alone, even in small houses, between a lot of family members. Devika feels and understands Kavya’s pain. Kavya tells that she is happy for Anupama and praying for Anupama to always be happy with her love Anuj.

Devika tells Kavya that she is also praying that she (Kavya) gets her share of happiness. She also tells Kavya that they can be each other’s well-wishers. Kavya tells Devika that she wishes that both of them can get a life partner like Anuj. Devika reminds Kavya that she already has Vanraj with her. Kavya says if Anupama can get a much better life partner than Vanraj, then others should also get. Devika feels tense and confused with Kavya’s words. On the other hand, Anuj shows all the rooms to Anupama. Anuj asks Anupama if she isn’t feeling uncomfortable in such heavy jewelry and lehenga. He tells Anupama that she can change into something light, if she wants to.

Anupama tells Anuj that she wants to stay as his bride full day today and is feeling fine. Anuj tells Anupama that she will always remain his bride and look beautiful even in a simple saree. He makes Anupama shy by kissing her forehead. Anupama makes Anuj kiss her cheek too and grows shy and happy. Seeing them in each other’s arms and mirror, Anuj says it looks like a beautiful dream. Anupama tells Anuj that he made it even more beautiful than a dream. Anuj and Anupama congratulate each other. Later, Anuj and Anupama start a post marriage ritual and win it together. Anuj and Anupama don’t win the second ritual properly.

Bapuji and Devika explain to Anuj and Anupama to not get disappointed, as people learn about each other more by living together and they will too learn more about each other soon. Paritosh receives Vanraj’s call asking him and Shah family members to return soon as Baa’s mother is suffering from severe dehydration, most probably and they need to reach her as soon as possible. Paritosh doesn’t reveal about Baa’s mother’s illness but takes everyone home. Devika also leaves. GK says he is going to the temple to thank God as he fulfilled their life’s biggest wish. Everyone leaves after meeting Anuj and Anupama.

Anupama starts missing her Shah family. She hugs Anuj with a smile. In the next episode, Anupama and Anuj will get romantic with each other. Anuj will pick up Anupama in his arms. On the other hand, Baa will get angry and tell everyone that Kavya was secretly talking to Anirudh. Vanraj will ask Kavya to clearly tell him what she wants. Kavya will handover some papers to Vanraj and demand divorce from him, like once he demanded from her. This will anger Vanraj.

Reviewed Rating for Anupama Amazing beginning 24th May 2022 Written Update: 3/5 This rating is solely based on the opinion of the writer. You may post your own take on the show in the comment section below.