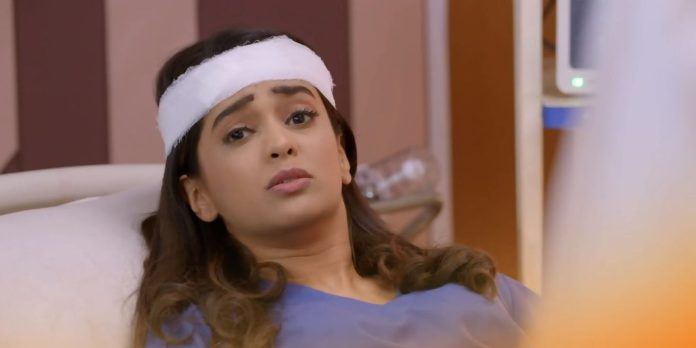 Kumkum Bhagya 25th May 2022 Written Update Prachi panics Prachi survives the accident, which happens by another car. Rhea takes her to the hospital for the treatment in time. She gets conscious and learns from the doctor that the nurse has gone to her sister to tell about her pregnancy. Doctor confirms it. Prachi tells that she doesn’t want to tell anyone about her pregnancy, not even to her sister. She asks doctor to stop the nurse. She wants to share the news with Ranbir first. She is much happy knowing that the baby is fine. Pallavi asks Rhea about Prachi.

Rhea pretends like she doesn’t know about Prachi’s accident. She asks Pallavi if Prachi didn’t come there till now. She worries. She tells that she had gone to pick Prachi and informed her, Prachi was coming to the hospital. Ranbir meets the nurse and asks her what does she want to tell Rhea about Prachi. He asks the nurse to tell him the matter instead Rhea. Nurse tells that she has come to give the good news. Prachi runs out of the ward to stop the nurse from revealing the pregnancy news, because she wants to reveal it to Ranbir herself. Will she reach there in time and stop the nurse? Keep reading.

Earlier in the show, the doctor injects Ranbir and puts him to sleep. Rhea takes a turn and leaves from the accident site, without helping Prachi. She goes away and parks her car. She keeps a watch on Prachi. Prachi lies injured and worries for her baby. Rhea thinks finally Prachi will die. She remembers Pragya when she steps away from Prachi. She remembers Pragya’s words, that they are sisters and should take care of each other always. She gets emotional about Prachi, and runs to save her. Rhea worries for Prachi and asks someone to help her in taking Prachi to the hospital. Prachi gets unconscious.

Rhea takes Prachi to the hospital. She rushes her and asks the nurse to admit Prachi immediately. She fills the form and writes the relation, that she is Prachi’s sister. Doctor checks Prachi and tells that it looks like a critical case, patient may not survive. He quickly shifts Prachi to the critical care unit. Rhea thinks what is she doing, when she wanted to kill Prachi, then why is she saving her. She tells herself that she hates Prachi, but she saved her life. She thinks what emotions are reviving in her, is this her love or ego. She tells that doctor has said that Prachi may not survive, then it will be good. She thinks if she killed Prachi, then her name would have come out, she is still her illegal Sautan even when she is her savior. She laughs and sheds away the emotions.

She wants to hide the truth until Prachi dies. She tells that she will lie to everyone about Prachi, so that nobody meets Prachi until she dies and gets away from their lives. She doesn’t want to tell anyone about Prachi’s accident, else Ranbir and Kohlis will run to her for sympathy. Doctor asks Rhea to give blood to Prachi, she is losing her life. Rhea tells that their blood group doesn’t match. She asks him to just save Prachi, and not let anything happen. Doctor tells that he can’t do anything, the situation is serious. Rhea pretends to cry. She laughs thinking Prachi will be finally dying.

She looks for Ranbir’s ward. She sees Pallavi and thinks Pallavi knew it well that she hates Prachi, even then Pallavi has sent her. She doesn’t want Prachi in her life. She wants to see the good news with Aaliya. She sees Aaliya and tells that Aaliya always wishes good for her, but the ideas she tells aren’t always good. She goes to Pallavi. Pallavi asks about Prachi. Rhea asks didn’t Prachi come there. Pallavi tells that maybe Prachi wants to show her importance. She is angered about Ranbir’s adamancy. Rhea tells that she will meet Ranbir and convince him to meet the family. Pallavi agrees.

He tells that a mother always worries for her baby. He asks the nurse to inform Rhea about Prachi and the baby’s safety, Rhea would be worried too. Pallavi tells Vikram that they also have a right on Ranbir, he asked them to wait until he meets Prachi, who doesn’t care for her. Vikram tells that they can’t fight Ranbir when he is in this condition, they shall wait for Prachi’s coming. Pallavi tells that she is going inside and meeting Ranbir now, he can’t refuse to meet her. Rhea and Pallavi go to meet Ranbir, and find him sleeping. Rhea tells the nurse that she is Ranbir’s wife, and Pallavi is his mom.

Pallavi tries to get the mangalsutra from Ranbir’s hand. Vikram asks Pallavi to leave Ranbir’s hand, he risked his life for the mangalsutra. Ranbir wakes up and finds Rhea and his parents around. He asks about Prachi. Pallavi tells that Prachi didn’t come, she doesn’t care for them, but they care for him and they have come. She tells that they were waiting to see him. Ranbir tells that he is sure that Prachi will come to meet him. Pallavi tells that Prachi doesn’t want to meet him, Rhea has informed her already, but she didn’t come. Ranbir shows his faith on Prachi. Nurses talk about Prachi and Ranbir.

The nurse has to inform Rhea that Prachi and her baby are fine. Pallavi calls Prachi. She tells Ranbir that Prachi isn’t answering. Prachi tells the doctor that she doesn’t have to tell Rhea about her pregnancy. She asks him to stop the nurse. The nurse goes to Ranbir to tell about Prachi. Prachi gets up from the bed. Doctor asks her not to go out. Ranbir asks the nurse what does she want to tell Rhea about Prachi. Rhea asks the nurse what is happening. Prachi runs to find Rhea. Nurse tells Rhea that the doctor asked her to give a message about Prachi. Rhea doesn’t want anyone to know about Prachi’s accident, that she admitted her there.

Vikram and Ranbir ask the nurse what does she want to say. Rhea tells them about Prachi’s accident. She apologizes for not telling this before, so that they don’t get stressed. Ranbir is shocked and worried for Prachi. He asks is Prachi okay. The nurse tells that she has come to give the good news. Prachi reaches there and stops the nurse. The nurse asks Prachi to give the good news to her family. Prachi hugs the nurse and thanks her. She tells that her family doesn’t know about her pregnancy, she wants to tell them herself. She tells Ranbir that she is much better now.

Ranbir gets up to meet Prachi. Rhea intervenes and asks Prachi to come to her room. Prachi tells that she is okay today because of Rhea, who saved her life today. She hugs Rhea with love. Rhea wants Prachi to get away from Ranbir. Rhea tells that Prachi needs some rest. Ranbir fails to talk to Prachi. Pallavi and Vikram make him rest. They tell that Prachi is okay, Rhea is a nice girl, she saved Prachi’s life by forgetting everything. Rhea scolds the nurse and asks her to take care of Prachi. Prachi gets glad seeing her concern. Ranbir gets discharged. He asks the doctor about Prachi’s ward. Rhea comes back and tells him about the room. Ranbir tells that he wants to go and meet Prachi.

Reviewed Rating for Kumkum Bhagya 25th May 2022 Written Update Prachi panics: 3/5 This rating is solely based on the opinion of the writer. You may post your own take on the show in the comment section below.