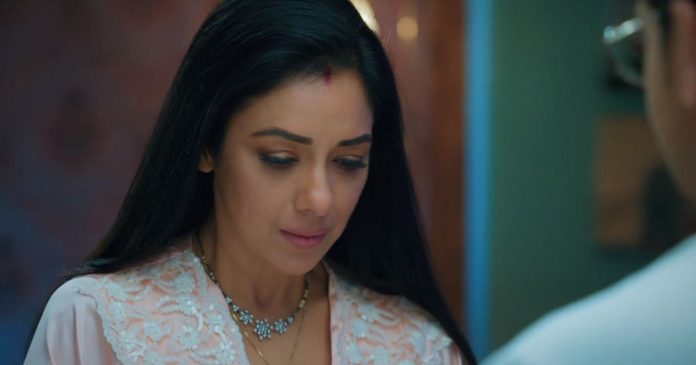 Anupama 28th May 2022 Written Update Romance begins Kinjal sees Baa separating coriander leaves from its sticks. She asks Baa why she is working so hard. After this Kinjal explains and shows Baa an easy way to separate coriander and its sticks. Baa tells Kinjal that in old times, women’s half life used to go in all these things. She says she hopes that this idea would have been there in her young times too. Kinjal makes Baa feel her baby’s kick. Baa tells Kinjal that she was very happy at the time of Paritosh’s birth as she became grandmother for the first time. She also tells Kinjal that now she is going to become a great-grandmother this time.

Baa further tells Kinjal that after returning to Ahmedabad, they will get Bapuji’s surgery done and then she will get a godh bharai function organized for her (Kinjal). She says till then Anupama will also return from her Mumbai Trip. Baa tells Kinjal that she speaks a lot of ill words to Anupama but misses her a lot too. Kinjal tells Baa that she and Vanraj are taking very good care of her but still a mother or her love can’t be replaced. She says she also misses Anupama a lot but is very happy seeing Anupama happy. Baa says she also wishes happiness for Anupama and Anuj’s married life.

She says Anupama full-filled all the responsibilities, not even being her daughter-in-law but Kavya on the other hand, doesn’t realize her deeds and responsibilities, even being her daughter-in-law. Baa says problems aren’t ending in the Shah family. She asks what bad thing her family did that they are getting punished like this. Baa tells Kinjal that she feels something untoward is going to happen. Kinjal feels a little shocked and worried. On the other hand, Anupama gets shy seeing her and Anuj’s honeymoon room arrangements. Seeing Anupama reading chip packet labels, Anuj asks Anupama what she is doing.

Anupama tells Anuj that hotel staff sell Rs. 20 chips for Rs. 200. She also tells Anuj that she is checking where chips actual MRP. is written. Anuj asks Anupama to forget the price of chips and continue with her swag. Anupama eats chips in a dramatic way. She asks Anuj to entertain her in different ways, without using shayaris. Anuj thinks he knew only one thing, shayaris and that option got snatched from him. Anupama asks Anuj to dance for her. Anuj tells Anupama that this slave doesn’t knew how to dance. Anupama asks Anuj why he called himself a slave as she thought he is her husband. Anuj tells Anupama that GK told him that husband becomes a wife’s slave after his marriage and thus he didn’t got married.

Anupama laughs hearing this. She again asks Anuj to dance for her. Anuj asks Anupama to not spoil honeymoon mood as he doesn’t know how to dance. Anupama expresses cute anger, shocking Anuj. On the other hand, Baa blabbers in worry how food will get prepared at home, when all 4 are not available. Samar comes and asks Baa who 4. Baa tells Kinjal is down with fever, Kavya has got habitual of wandering outside and her 2 knees are in pain. Samar asks Baa to not worry as he ordered food from outside. Baa reminds Samar that he ordered chinese yesterday too.

Samar tells Baa that this time he didn’t order chinese. He explains to Baa that he ordered food from, “Banni Chow Home Delivery”, which is very famous in Jodhpur. Samar tells Baa that Banni Chow Home Delivery’s owner has arrived in Jamnagar, so he ordered food from there only. Banni arrives with her food’s service’s special delivery. Kavya comes and asks Samar why he orders food from shady places. Banni asks Kavya to taste her food once as it will make her life happy and tongue full of taste. Kavya says thank god she already has plans for lunch with Anirudh at a 5-star hotel. Banni asks Kavya to once taste her food, as after that she will forget all 5-star hotels.

She says she has 150 customers at present and is preparing to have 1,50,000 customers in the near future. Kavya leaves irritated. Samar thanks Banni for coming and bringing food as they were missing Anupama’s handmade food a lot. Banni organizes the lunch table for everyone. Samar asks his family members to come outside quickly, if they wish to eat food which tastes like mother’s handmade food. Bapuji and Kinjal arrive. Seeing food, Bapuji asks if Anupama sent it. Banni asks Bapuji to think that his daughter Anupama sent this food. She says Samar just told her about Anupama. Banni says maybe Anupama would have prayed for her kids and family’s happiness and thus god sent her to them with delicious food.

Banni introduces herself as well as her food service with its menu. This makes everyone laugh and smile wholeheartedly. Banni serves food to everyone on plates. Everyone finds the food delicious. Bapuji says it feels like Anupama herself made it. Banni says maybe Anupama would have, “Maa Annapurna’s” blessings like she has. She also takes a selfie with Baa, Kinjal, Bapuji and Samar. Banni asks Shahs to send this photograph to Anupama as her stomach will get full seeing them happily having food. Banni leaves for Jodhpur asking Shahs to give her feedback wholeheartedly. On the other hand, Anuj performs for Anupama in Hritik style dance on the song, “Ek Pal Ka Jeena”.

Anupama also performs and enjoys with Anuj. Anuj gifts Anupama a nighty. Seeing Anupama nervous, Anuj asks Anupama to take her time and tell him her decision after he returns from shower. He reminds Anupama that he did whatever she said. On the other hand, Baa gets angry as Kavya didn’t even return till 11PM. Paritosh tries calming down Baa. Baa asks Paritosh to think what Vanraj would be suffering through, seeing his wife wandering with her ex. Vanraj comes and tells Baa that it’s fine and asks her to let Kavya do as she pleases. He asks Paritosh to take hot milk to Kinjal as he has given a glass to Bapuji. Baa says she will surely teach a lesson to Kavya, when she returns.

Seeing Anupama getting reluctant, Devika reminds that she fought many difficult problems and orthodox people of society for Anuj. She asks Anupama to fight her own thought process too. Devika convinces Anupama to wear the nighty she gifted as her and Anuj’s private moments are their own and very important for them. She explains to Anupama that they should not take beautiful moments of their lives for granted. Devika disconnects the call asking Anupama to make Anuj forget his shayaris seeing her looks. Anuj returns from shower and searches for Anupama. Anupama comes wearing Anuj’s gifted nighty and mesmerizes Anuj.

Anuj speaks a shayari for Anupama addressing her as his fairy and princess. “Mere Rang Mein Rangne Wali” plays in the background. Anuj and Anupama do a romantic dance. Later Anuj picks up Anupama in his arms and takes her towards their bed.

In the next episode, Anupama and Anuj will come across an orphanage. Anuj will tell Anupama that children used to beg for everything in the orphanage. He will also tell Anupama that they were taught to say, “Thank You” after receiving what they begged for. Anuj will further tell Anupama that his first word wasn’t “Maa” like every child. He will explain to Anupama that it’s a big curse for a child to not have a family. Anuj will also explain that getting family’s love is a biggest blessing. In the same orphanage, a little girl will be seen wearing ghungroos. She will ask Lord Krishna to give her, “All the best” blessings. Anuj’s eyes will hope to adopt a child.

Reviewed Rating for Anupama 28th May 2022 Written Update Maan Romance: 5/5 This rating is solely based on the opinion of the writer. You may post your own take on the show in the comment section below.