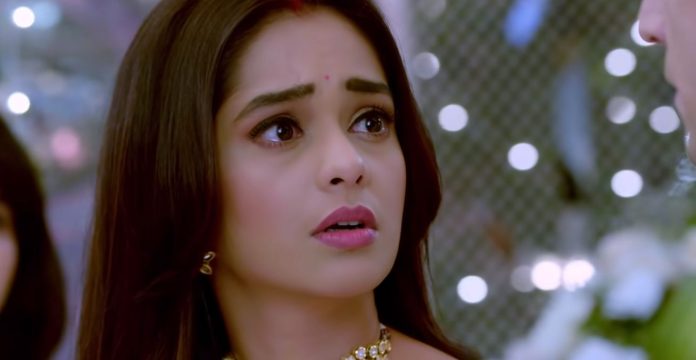 Kumkum Bhagya 1st June 2022 Written Update Twist for Prachi Aaliya shares a good news with Pallavi. She tells Pallavi that Ranbir was scared that anything could have happened to him in that accident, and Rhea would have fell lonely, so he expressed his feelings and hugged Rhea. She adds that Rhea felt that Ranbir really loves her. Pallavi is really happy on knowing this, that Ranbir took a step towards Rhea. Ranbir tells Jai that he is going to meet a divorce lawyer, he is going to get divorce from Rhea, and then he will spend his entire life with his real wife Prachi. Prachi is upset with him. She tells Shahana that Ranbir not only married her on this day, but also made promises to her, but now after three years, he just remembers Rhea and his business. Rhea hears Prachi shouting helplessly on losing Ranbir. She gets super excited to break Pranbir away.

Earlier in the show, Prachi asks Shahana to go and have food. Shahana asks her not to blackmail her. They share a laugh. Ranbir thinks Prachi and Shahana fooled him about the pregnancy. He is glad that Shahana will stay with Prachi and care for her. He asks Shahana how is the baby. She tells that the baby is fine. He asks her to stay at home till the delivery then he will name the baby. She gets worried and runs away to avoid him. He goes to see Prachi. He asks her to have the food. She tells that she will have it herself. Ranbir tells that she has to eat the food when Dida and Shahana come and scold her. He asks her to please eat. He serves her the food. She stays puzzled seeing his behavioural change.

Rhea is on cloud nine thinking of Ranbir’s hug. She weaves many dreams. She collides with Shahana, and gets into an argument with her. Shahana doesn’t want to scold Rhea this time, knowing the latter has saved Prachi’s life. She tells that he will forgive Rhea for her mistakes. She lectures Rhea. She tells that if Rhea makes another mistake again, then she will not spare her. She leaves Rhea with a warning. Rhea calms down herself. She wants to plan a romantic surprise for Ranbir.

Ranbir is planning a surprise for Prachi. He is in the kitchen, preparing the food for Prachi. Rhea tells him that she never saw him cooking before. He tells that he is making the Sheera. She wants to ask him something. He asks her to ask him anything, he is really happy. She asks him the reason for their hug, why is he so happy, why isn’t he telling her. Ranbir remembers his promise to Prachi. He doesn’t want to tell anything to Rhea. He tells that the matter is related to Prachi. She asks him the matter. He tells her that she will love it if the news comes out, she should wait till Prachi gives him the news. She tells that she is really excited to know. He asks her not to ask Prachi, he will tell her the matter.

He tells her that Prachi loves the rented apartment, she wanted to buy it, she is finally buying it, her dream is getting fulfilled, so he is happy for her. She thinks Prachi will leave the house and go away to the new house. She likes the idea. He tells that he is thinking to buy the house for Prachi and gift it to her. She tells that she won’t tell the surprise to anyone. She thinks that Ranbir’s surprise will shock Prachi. Ranbir goes to meet Prachi and surprises her with the Sheera. He remembers that she used to love this. He tells her that he got a good news so he has got sweets for her.

She asks the good news. She asks why is he sharing it with her. He tells her that his dream is getting fulfilled, his startup is really doing well, so he wants to share the good news with her, she is lucky for him. She thinks they have always seen the dreams together, but they couldn’t share the happiness. Ranbir thinks he is earning the money now to fulfil his third dream. He wants to give her all the happiness. He feeds the sweets to her. She also reciprocates his feelings and feeds the sweets to him. He happily hugs her and congratulates her. He wants to control his feelings and not show her that he knows the pregnancy news. He asks her to take rest and recover.

He pampers her. He asks her to close her eyes and sleep. She asks him to go away, she can’t sleep when there is someone in the room. He tells that she got habitual to stay alone. He thinks she should change the habit soon. he asks her to sleep and goes away. Rhea keeps a watch on them. She thinks what’s going on between them, she should find out the truth. Pallavi and Aaliya meet at the breakfast table. Pallavi tells that she likes to set the table and work for the family.

Aaliya tells that the family also belongs to her. Pallavi asks why is she looking so happy. Aaliya tells that Ranbir and Rhea are coming close, all thanks to Pallavi, who sent Rhea to the hospital, Ranbir hugged Rhea thinking of her future, he was scared that Rhea would be lonely if anything happens to her, Rhea feels he loves her. Pallavi likes the good news. She tells that maybe Ranbir and Prachi cut a cake and celebrate their anniversary. She doesn’t want Rhea to break down. She is pretty sure that Ranbir won’t throw a wedding anniversary party.

Aaliya tells that Ranbir will do everything for Rhea, finally its happening as they wanted. She hugs Pallavi. Pallavi tells that she is excited that Ranbir and Rhea will have their own family. Prachi tells Shahana that she is angry on Ranbir. Ranbir makes Shahana away to talk to Prachi. He shows his excitement and feeds the sweets to the family. He congratulates them. Prachi thinks what’s the reason. He feeds the sweets to Prachi. She wishes him happy wedding anniversary. He interrupts her. He tells that they shall celebrate happiness, they will keep a party at home tonight.

Pallavi asks him to celebrate if he wants, his party is going to be perfect, she will arrange the party for him. He calls her the world’s best mom. Aaliya tells Rhea that maybe he wants to propose Rhea. Prachi asks what’s the reason for the party. Ranbir tells that the party is a business merger, it’s a love venture. Vikram asks more about it. Ranbir tells that the company will plan destination weddings for the couples. He shares his idea. Vikram loves the idea and hugs Ranbir. Ranbir asks Pallavi to make the best arrangements. Ranbir and Prachi wish each other happy wedding anniversary from their hearts. He leaves for office. Later, Ranbir meets a new assistant Stanley in the office.

The guy tells that he is Ranbir’s big fan, he reads Ranbir’s every article in the business magazine, he knows everything about Ranbir. He praises Ranbir. He asks Ranbir how does he perform so well in business. Ranbir hires the guy because he wants energetic people in the office. Ranbir meets Ramnik and asks him to get seated. He asks Stanley to note down the address and do his work. He then selects a diamond ring for Prachi. He buys the ring from Ramnik and makes the payment.

He asks Stanley to talk to him tomorrow. He tells that its his wedding anniversary today, he is going to take divorce from Rhea, and then he will spend his life with his real wife. Prachi vents anger by cutting the onions. Shahana knows that Prachi is upset with Ranbir, he forgot the anniversary, because he is busy with the business. Prachi tells that he must remember such important days. Shahana asks her not to lose the mental peace. Prachi tells that Ranbir had promised her, but he just remembers Rhea and business now. Rhea smiles hearing her.

Reviewed Rating for Kumkum Bhagya 1st June 2022 Written Update Twist for Prachi: 5/5 This rating is solely based on the opinion of the writer. You may post your own take on the show in the comment section below.