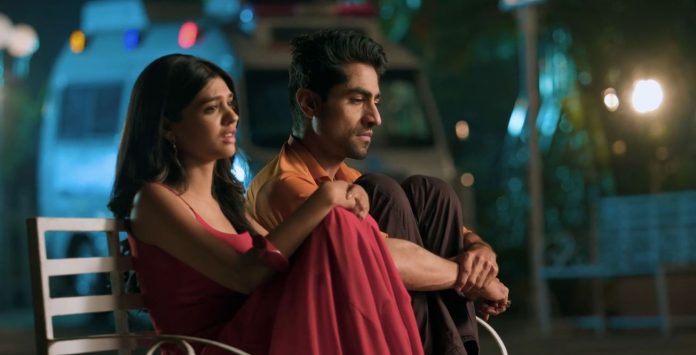 Yeh Rishta Abhira feud 8th June 2022 Written Update Abhimanyu sits in his bike to go in search of Neil. He gets angry seeing Akshara sitting behind him. Abhimanyu refuses Akshara’s requests to go with him to find Neil. Akshara asks Abhimanyu to tell her what was her mistake in all this. Abhimanyu tells Akshara that she wasn’t at fault, when Harsh kept a wrong relationship with Avni, how Harsh treats Manjiri badly, when Manjiri brought Neil to Birla house years ago. He also tells Akshara that she did wrong this time by not respecting Manjiri’s requests and wishes to not reveal the truth to Neil about his real identity.

He tells Akshara that she did wrong by interfering in Birla family’s matters, even when he took a promise from her to not interfere. Abhimanyu accuses Akshara of Manjiri’s present ill condition, Neil and his family’s condition today. Before he could say anything else, he finds Akshara missing from nearby him. Abhimanyu gets confused and leaves to find Neil. Akshara on the other hand also feels worried about Neil’s whereabouts. She tries calling and texting Neil but the latter doesn’t respond. Akshara witnesses Manjiri sharing her pain of losing Neil with Mahima. Abhimanyu on the other hand, keeps searching for Neil on the streets.

Flashbacks of Abhimanyu and Neil’s happy moments are shown. Neil on the other hand is shown wandering on the street without any focus or concentration. At Birla house, Mahima tries to calm a tense, worried and broken Manjiri. Akshara feels bad witnessing this. Mahima asks Manjiri to have faith in Neil and her upbringing. While walking on the streets, Neil recalls Harsh’s bitter and Harsh words. He also recalls how his true identity got revealed. A tempo passes from nearby Neil and a net falls from it over Neil. At Birla house, Akshara tells Manjiri to not worry as everyone went to find Neil and he will return home soon.

Angry Manjiri tells Mahima that her years long motherhood and love became less in front of the questions that Neil asked her today. This shocks Akshara. Manjiri says Neil’s pain won’t lessen with any of her words. On the other hand, Neil struggles inside the net and screams for help. Manjiri tells Mahima that in the eyes in which she saw love and respect for her till now, she also saw hatred for her in the same eyes today. Abhimanyu and Neil have a hit and miss and they fail to see each other. Neil frees himself from the net and relaxes a bit. At Birla house, Mahima tells Akshara that Manjiri is not interested in any of her explanations. She asks Akshara to leave her and Manjiri alone.

Akshara feels hurt but remains silent. Harsh overhears everything and gets to know that Neil isn’t at home. Akshara prays to God to help Abhimanyu find Neil. On the other hand, Shefaku and Parth are also seen searching for Neil here and there. On one side Neil’s feet collide with the stone and on the other side, Abhimanyu’s tension for Neil grows. He screams in worry and anger but his scream gets pressed under heavy machinery’s noise. A car stops just near Neil. At Birla hospital, Harsh takes some medicine in anger and tension. Akshara tells God that she is ready to bear anything but just wishes that Neil returns home.

Akshara receives Aarohi’s call and gets shocked hearing the latter’s words. She runs outside Birla house. On the other hand, Parth shares his worries about Neil and his emotional condition with Shefali. Akshara runs and reaches Goenka house. On reaching Goenka house, she finds a tense Neil sitting there. Aarohi sees Akshara and recalls how she found emotionally tense Neil near a dangerous pit. In the flashback, Aarohi gets shocked hearing that Neil wishes to die. She understands that her plan worked and a lot of drama happened at Birla house because of Neil’s real identity. Flashback ends with Aarohi making Neil sit in her car.

He refuses to hear any explanation from Akshara. Akshara requests Neil to let her explain herself to him, just once. Neil asks Akshara how can she treat him like this, when they took each other as brother-sister. Akshara tells Neil that she still considers him as her brother. Neil tells Akshara that she is just saying this but didn’t fulfill her responsibility of being his sister. This shocks and hurts Akshara. Swarna and Manish recalls Shubham and Naira’s misunderstandings. They feel that similar misunderstandings are growing between Neil and Akshara and get worried. Swarna tells Manish that she can understand Manjiri’s reasons behind hiding Neil’s true identity but Neil won’t be able to understand the same.

Manish says when such secrets come out, it brings troubles, pain and storms with them. Neil requests Akshara requests and asks her to stop her drama. He tells Akshara that she can’t even imagine his pain. Neil requests Akshara to leave him to his condition and let him go. Akshara stops Neil and makes him sit. She bends down and requests him to return home as everyone is worried at home. Akshara reminds Neil that Manjiri is very stressed and ill. She tells Neil that he can stay angry and silent with everyone. Akshara also tells Neil that Manjiri’s condition will improve seeing him in front of her. Neil refuses to return to Birla house.

Abhimanyu reaches Birla house. Both Abhimanyu and Akshara talk to each other in thoughts. Abhimanyu angrily tells Akshara that she didn’t even feel the need to tell him about Neil’s whereabouts but Vansh told him. Akshara tells Abhimanyu that she was about to tell him but came running to Goenka house. Abhimanyu asks Akshara why she keeps things hidden, which should be told and reveals things, which should be kept secret. Abhira’s thought’s conversation ends. Abhimanyu hugs Neil tightly. Angry Mahima too reaches Goenka house. Goenkas gets confused and worried seeing Mahima’s expressions.

Abhimanyu politely scolds Neil for walking away without telling anyone. He tells Neil that everyone is worried for him at Birla house. Mahima asks Abhimanyu to take Neil to Birla house, which is their own house. She says they will have further conversation at their home only. Mahima’s words worries Goenkas and especially Akshara. Neil walks away from Abhimanyu. Mahima angrily stops Akshara from going behind Neil and Abhimanyu. This shocks and worries Goenkas. Abhimanyu stops Neil and asks him what is his fault in all this and why he is getting angry with him. He tells Neil that he will always be his elder brother and their relation with each other won’t ever change.

Neil refuses Abhimanyu’s requests to return to Birla house and expresses his anger at him. He leaves Abhimanyu alone. In the next episode, Akshara will try to stop Abhimanyu from revealing Neil’s true identity to the Media in haste. Later, Akshara and Abhimanyu will come closer to each other, when Abhimanyu will save Akshara from falling down.

Reviewed Rating for Yeh Rishta Abhira feud 8th June 2022 Written Update: 5/5 This rating is solely based on the opinion of the writer. You may post your own take on the show in the comment section below.