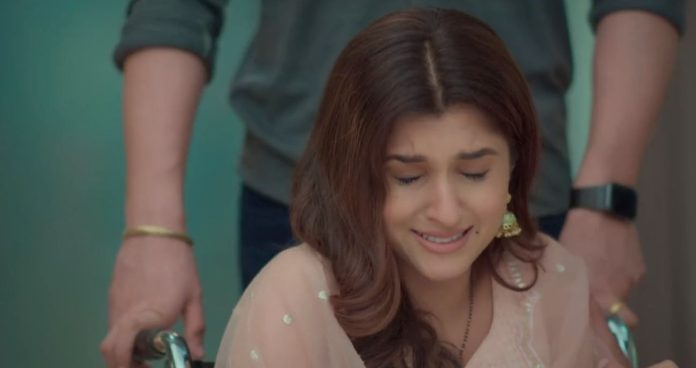 Anupama 21st June 2022 Written Update Kinjal’s accident Music plays and everyone starts dancing. Anupama tries keeping Pakhi and Adhik away from each other. Anuj and Ankush return home and ask everyone why they weren’t informed about the party. Sara tells Anuj and Ankush that it’s the youngsters party, and they have no work in it being old. Anuj says he and Ankush aren’t old. Ankush and Anuj tell everyone that they will show them what is partying. Except Kinjal, everyone starts dancing to the song, “Kajra Re”. Initially Barkha feels angry but starts smiling.

Samar tells Kinjal and Pakhi that Barkha is very unpredictable. Pakhi says she finds Barkha cool. Kinjal says Barkha is second Kavya, as she changes her nature from time to time and is very unpredictable. Ankush walks towards Barkha, who has stopped smiling. On the other hand, seeing Vanraj worried and tense, she asks him why he didn’t stop children from going to Anupama’s house. Vanraj tells Baa that he can’t oppose Bapuji. He also tells Baa that he isn’t that much worried about Kinjal and Samar as they are mature enough. Vanraj says he is worried about Pakhi as in her age every bright thing seems gold.

He tells Baa that he is worried thinking that Pakhi will like to stay at the rich house of Anuj and Anupama. Vanraj tells Baa that he tolerated everything, even his defeat but can’t tolerate losing his children. Baa recalls seeing Pakhi and Adhik staring at each other with love or infatuation in their eyes. She tells Vanraj that his fear is not wrong as Pakhi’s age is such. At Kapadia house, Barkha asks Ankush how his first day at office went. Ankush asks Barkha to talk about later and first enjoy the party. Anuj asks Pakhi to take photographs for social media. He asks Sara and Adhik to join the group/family photograph. Ankush asks Barkha to not think that everyone is like her.

He says Anuj and Anupama don’t differentiate between children. Barkha tells Ankush that it doesn’t take time for discrimination to take place. She also tells Ankush that it doesn’t take long for a difference to arise. Pakhi and Adhik try to get closer to each other with an excuse of clicking selfies. Baa gets shocked and worried seeing Pakhi and Adhik standing closer to each other in party photographs, which Vanraj shows her. “Guess the picture” game starts at Kapadia house. Kinjal is about to fall by getting hit with furniture but gets saved. She gets worried but ignores her worries. Anupama makes Kinjal sit comfortably.

Adhik reveals that Barkha has been a champion in “Guess the picture” game since childhood. Anupama asks everyone to sleep now. Everyone refuses to sleep early. They convince Anupama to let them enjoy till 12 AM. After this everyone starts insisting Anupama to dance. She feels reluctant and this makes Anuj angry. Anupama gets stunned seeing Anuj sitting angry with a bloated/puffy mouth like a kid. On the other hand, Vanraj recalls Pakhi’s excitement about Anupama’s big house and Kapadia’s lifestyle. Bapuji comes there and asks Vanraj why he hasn’t slept yet.

Vanraj makes Bapuji sit with him. He tells Bapuji that he has no job which can make him tired so that he could have a peaceful sleep. Vanraj asks Bapuji why he didn’t sleep till now. Bapuji tells Vanraj that a person doesn’t feel much sleepy in this age. They tell each other that it’s difficult to fall asleep in children’s absence. Vanraj asks Bapuji to get habitual of being awake late at night as soon he has to take care of Kinjal and Paritosh’s, upcoming child. Bapuji misses Anupama. Understanding Bapuji’s feelings, Vanraj assures Bapuji that he will try to handle home and family just like Anupama.

He says he doesn’t want to send Kinjal to Rakhi’s house. Bapuji tells Vanraj that this decision should be of Kinjal, not them. He explains to Vanraj that no one can take care of children as well as a mother can. Vanraj asks Bapuji if a father can’t take a mother’s place. Bapuji explains to Vanraj that for today his kids are staying with Anupama, it doesn’t mean they forgot him. At Kapadia house, Anupama is seen dancing to the song “Nainowale Ne”. Kinjal gets up to keep the empty glass. At the same time, Barkha also stands up but her eyes are on her phone. Barkha’s foot slips on the cushion fallen on the floor. She loses her balance and by mistake Kinjal gets pushed by her.

He tells Kavya that he hopes that his fear turns out wrong. At the same time, Paritosh comes running to Kavya and Vanraj. He tells them something worrying about Kinjal. On the other hand, Anupama, Samar, Anuj and Kinjal are seen going to the doctor. Kinjal expresses her worries about her baby to Anupama. Anupama blames herself for Kinjal’s condition. Anuj explains to Anupama that it’s not her fault but an accident. He tells Anupama that nothing will happen to Kinjal’s unborn child as he/she has many blessings with him/her. Anupama still blames herself for not being able to take care of Kinjal and her upcoming child.

At Kapadia house, Barkha cries and tells everyone that she didn’t do anything intentionally. She explains that her foot got stuck on the cushion, she got disbalanced and pushed Kinjal by mistake. Barkha says Kinjal must be in much pain. She asks what she will do if something happens to Kinjal or her upcoming/unborn baby. Ankush explains to Barkha that they know that she didn’t do anything on purpose. He asks Barkha to calm down as everything will turn out fine. Pakhi blames herself for the mishap and says that Vanraj will get very angry knowing this.

Vanraj, Kavya, Bapuji and Paritosh are seen on the way in their car. Kavya tries to calm Vanraj and others saying that nothing will happen to Kinjal and her upcoming baby. While Sara tries to calm Barkha, Adhik tries calming down Pakhi. Ankush tells Barkha that it was an accident. Barkha says it was an accident but Kinjal fell down because of her. Vanraj with his family members reaches Kapadia house. He hears Barkha blaming herself for the mishap with Kinjal. Vanraj keeps scolding Barkha for being careless towards pregnant Kinjal. He accuses Barkha for Kinjal’s present condition.

Paritosh tries to find Kinjal in Kapadia house. Ankush comes in between and akss Vanraj to not scream. He tries defending Barkha in front of Vanraj. Both Vanraj and Ankush scream each other’s name. This shocks and scares everyone else. While Bapuji tries controlling Vanraj, Adhik requests Ankush to control himself. On Vanraj’s questioning, Pakhi tells Shahs that Anuj, Samar and Anupama took Kinjal to the nearby clinic. Paritosh asks Pakhi if Kinjal and baby are fine. Pakhi says she doesn’t know about it at present. Vanraj asks Paritosh to call Samar and get information about the current situation.

He asks everyone to pray that Kinjal and her child get well, else he will not let anything go well. Vanraj’s threat shocks some and angers some. Anupama, Samar and Kinjal return to Kapadia house. Everyone runs to them. Paritosh asks crying Kinjal, what happened. Vanraj keeps asking Anupama what happened and what the doctor said. Anupama just keeps apologizing. Everyone waits for an answer from Anupama.

In the next episode, Vanraj will announce that his children and daughter-in-law won’t visit Kapadia house. He will taunt Anupama for failing to take care of her children, daughter-in-law and grandchild. This will shock everyone.

Reviewed Rating for Anupama 21st June 2022 Written Update Kinjal’s accident: 4/5 This rating is solely based on the opinion of the writer. You may post your own take on the show in the comment section below.