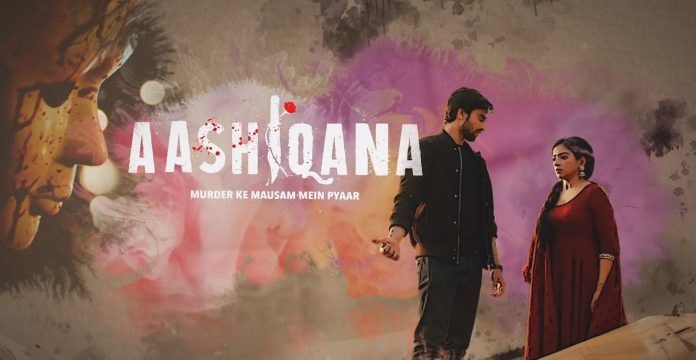 Hotstar Aashiqana 25th June 2022 Written Update While tending to Chikki’s wound, Yash lovingly asks her to walk around carefully from next time. Chikki feels worry, love and care for her in Yash’s words. Both Yash and Chikki get lost in each other’s eyes. Chikki removes her hair touching Yash’s cheeks, because of air. “Oh Sajna” plays in the background. Yash bandages Chikki’s wound with his handkerchief and asks her to take care of her. Yash’s grandmother sees all this from a distance and feels angry.

Later, Yash reaches his home with his whole family. Yash’s whole family enters their home with teary eyes. Shivani (Yash’s sister) runs and hugs Yash. On the other hand, Chikki also hugs her sister Payal. Both Yash and Chikki have an emotional family hug with their respective families and at their respective homes. Next morning, Yash finds Chikki’s suit’s dori at his house terrace. He recalls his proximity with Chikki. Yash also recalls how bravely Chikki destroyed the drone and helped him in saving his family. On the other hand, Chikki also recalls her proximity moments with Yash. Pink hearts, birds and little hot air balloons can be seen flying around Chikki.

This is Chikki’s imagination as she fell in love with Yash. Yash and Chikki both recall their moments with each other and smiles being shy. “Oh Sajna” plays in the background. Both Yash and Chikki keep on smiling and recalling their moments with each other. Payal takes Chikki out of her beautiful and lovey-dovey imagination. She tells Chikki that her phone is coming off and thus Golu has called her. Payal also tells Chikki that Golu found out the hospital name in which the constable who got shot is admitted. Chikki smiles wide hearing this and Payal leaves confused.

On the other hand, Yash receives Jaggi Raja’s call. Jaggi Raja asks Yash to come to the hospital to meet him. Yash asks Jaggi Raja why he wants to meet him. Jaggi Raja tells Yash that he wants to talk about something important with him. Yash wonders why Jaggi Raja wants to meet him as soon as possible. On the other hand, Chikki reaches the hospital to meet police constable Umesh. Outside Umesh’s ward, police officials Bindu Patil and Sachin Yadav meet Chikki. Sachin as usual greets Chikki, addressing her as sister-in-law. Shy Chikki asks Sachin to not address as her sister-in-law.

Baindu and Sachin let Chikki meet Umesh. Chikki thanks Bindu and enters Umesh’s ward. Flashbacks of scared Chikki, failing to save Umesh because of gunshot voice/noise fear is shown. Chikki’s voice in the background says that she is responsible for Umesh’s bullet injury. She further says that she hopes that Umesh gets well soon. Umesh surprises Chikki by recognising Chikki. Chikki asks Umesh how he knew his name already. Umesh tells Chikki that the whole police department knows about her. He tells Chikki that everyone knows how she saved Rajkumar and Yash’s brother Raj.

Umesh addresses Chikki as sister-in-law and calls her brave. Chikki looks at Umesh in shock. Umesh apologizes to Chikki for addressing her as sister-in-law. He tells Chikki that he has got used to hearing Sachin calling her Bhabhi. Suddenly someone coughs from the bed next to Umesh. Umesh shows Chikki that Jaggi Raja is lying on the bed next to him. Chikki gets emotional seeing Jaggi Raja lying handcuffed on bed, in bad condition. She says it’s not good to be sympathetic towards criminals but Jaggi Raja seems very sad. Umesh tells Chikki that Jaggi failed to perform and attend his son’s last rites.

Later, Yash reaches the hospital. A killer in doctor’s disguise passes from near Yash with unconscious Jaggi Raja on a stretcher and his face covered with white sheet. Serial Killer’s evil voice and unique tattoo with deed/karm written on his wrist can be seen. Yash enters Umesh’s ward and gets shocked seeing Umesh’s neck slit and bleeding. He screams/shouts and calls Sachin and Bindu. Sachin and Bindu rushes to Umesh’s ward breathing heavily. They tell Yash that Jaggi Raja escaped, injuring Umesh. Yash asks Sachin and Bindu how Jaggi Raja escaped and what they were doing. He asks his juniors, who uncuffed Jaggi Raja.

Chikki enters Umesh’s ward with a lit lamp. She gets scared and shocked seeing Umesh’s neck slit and bleeding. Yash, Bindu and Sachin notice the handcuff’s key in Chikki’s hand. Yash sends Sachin and Bindu to call the doctor. Handcuff’s key falls down from Chikki’s hand. Yash grows angry, misunderstanding Chikki. Chikki stutters and asks Yash how this happened. Yash pushes the diya from Chikki’s hand and drags her to an empty space in the hospital. He asks Chikki if she uncuffed Jaggi Raja. Chikki tries to explain Jaggi Raja’s condition and situation to Yash but he doesn’t listen to her. Yash keeps on asking Chikki, if she uncuffed Jaggi Raja or not.

He asks Chikki to answer him just in yes or no. He breaks the hospital chair in anger, hearing yes from Chikki. Chikki gets scared seeing Yash’s angry reaction. Yash breathes heavily. Chikki gets worried for Yash seeing a lot of blood dripping from his arms and hands. Yash angrily walks to Chikki and tells her that he made a mistake by trusting her. He reminds Chikki that Umesh was admitted in hospital just because of her. Yash blames Chikki for Umesh’s present and worse condition. He asks Chikki how could a scared, timid, shaking and stupid girl like her, dream of joining the police force. Chikki keeps on crying.

Yash asks Chikki to never ever show him her scared face again. He leaves angrily. “Oh Mere Sohneya” sad version plays in the background. Chikki cries profusely. Flashback shows the serial killer entering Umesh’s ward in a doctor’s disguise as Chikki leaves. With a check-up excuse, he shuts Umesh’s mouth and slits his neck. The serial killer also injects something in Jaggi Raja’s neck and scatters the stuff in Umesh’s ward. He screams and calls nurses, Sachin and Bindu inside the ward. Everyone gets worried seeing Umesh heavily bleeding.

Sachin and Bindu rush to search for missing Jaggi Raja. The serial killer asks nurses to go and prepare for Umesh’s surgery and operation, quickly. Sanskrit Shlokas can be heard in the background. Jaggi Raja can be seen lying unconscious under Umesh’s bed. The serial killer in doctor’s disguise passes from near Yash with unconscious Jaggi Raja on a stretcher and his face covered with white sheet. Flashback ends. Later, Sachin, Rajkumar, Bindu, Yash and 2 other constables are seen crying with guilt of failing to save Umesh’s life. Rajkumar asks his colleagues how they will save others, when they failed to save their own colleague.

Serial Killer stabs Jaggi Raja brutally. He sees Chikki crying profusely and leaves the hospital. Later, Chikki returns home. Chikki’s maternal uncle opens the door and starts taunting her using ill words. He accuses Chikki of having fun at night in wrong and vulgar ways. Chikki’s maternal aunt tries to stop her husband but fails. He ousts Chikki from his house and ruins her image by indirectly calling her prostitute. Chikki’s maternal uncle closes the door on her face, telling her that it’s a house where decent people live. This shocks and hurts Chikki.

Reviewed Rating for Hotstar Aashiqana 25th June 2022 Written Update: 4/5 This rating is solely based on the opinion of the writer. You may post your own take on the show in the comment section below.