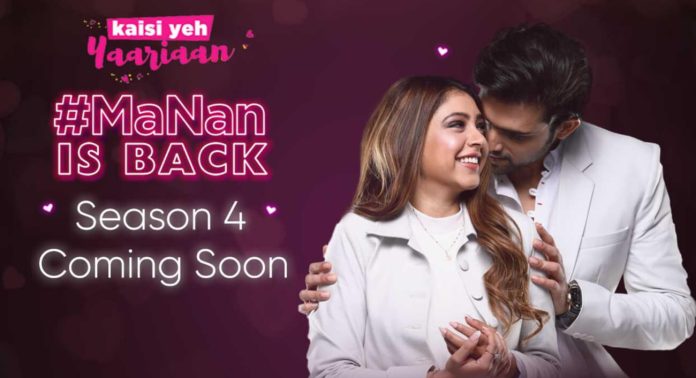 Kaisi Yeh Yaariaan Season 4 Coming Soon on Voot Parth Samthaan and Niti Taylor starrer Kaisi Yeh Yaariaan Season-4 to stream soon on Voot. There is good news for fans of #MANAN as the most loved teenage rom-com Kaisi Yeh Yaariaan is coming back soon to mesmerize you with its 4th season. Manik and Nandini will soon grace your screens with their bittersweet love story, fights, romance, and adventures. After the blockbuster magic of its three seasons, the magical duo Parth Samthaan and Niti Taylor promise double the dose of contemporary romantic love story.

Youth icon Parth Samthaan posted a picture from the shoot on his Instagram and informed his fans about KYY4. He captioned his picture as “So…..it’s finally happening! 😋 Country’s Most Popular Youth Show is Backkkk ❤️😎 Get ready for a crazy season of love, passion, betrayal and of course friendship 😎—-Kaisi Yeh Yaarian Season 4 !!!!!!! Yesssss we are back ❤️🕺😎@voot @nititaylor #ComingSoon #Voot #KYY”

The chirpy and bubbly actress Niti Taylor also took to her Instagram handle and announced the release of the much-awaited season to her fans and captioned her post “Just couldn’t keep it to myself anymore, so here you go! 😋@voot @the_parthsamthaan #ComingSoon #Voot #KYY”. Voot also shared a short promo of Parth and Niti going through the comments of their fans requesting for the season 4 of KYY. They are seen saying that they will be back with the series soon and ask their fans to stay tuned on Voot.

Parth and Niti’s sizzling chemistry was always the talk of TV town since its first season on MTV and it will be an icing on the cake when the audience will see their favorite couple ooze out romance and give out various ‘Awww’ moments. The climax of the third season showed Manik proposing to Nandini for marriage and she rejecting it only to patch up later. Now it will be interesting to see whether our beloved Manan will marry in this season and surprise their fans.

Do comment and state your views and opinions in the comment box below about this upcoming web series “Kaisi Yeh Yaariaan Season-4” starring Parth Samthaan and Niti Taylor in prominent roles.