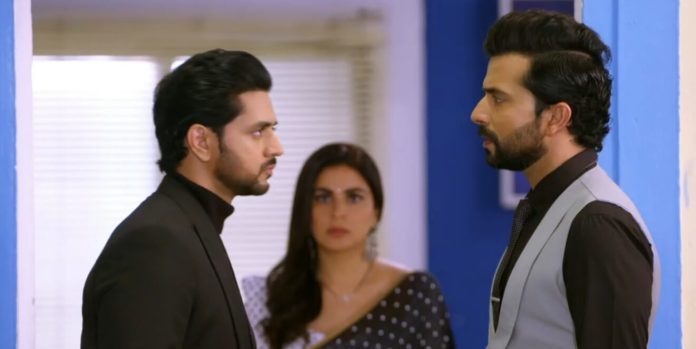 Kundali Bhagya 30th June 2022 Written Update Open war Karan meets Kavya and asks her name. She tells her name, the Kavya Luthra. She reminds him of his old days. He asks her dad’s name. She says Rishabh Luthra. He is shocked to know that. Prithvi gets to read the news of Karan’s cricket bat auction on the day of his fifth death anniversary. Prithvi wants to get back to Luthra house. Rishabh and Preeta confront Arjun/Karan for bringing Kavya to the hospital without their notice. Rishabh rebukes Karan unknowingly of his identity. He asks Karan to get ready to bear the consequences of his actions. Karan replies that he also decided that Rishabh won’t be bearing the consequences of his deeds.

He tells that he isn’t Arjun, he is the Karan Luthra. She replies that she doesn’t care about his past, Nidhi has saved him and gave him Arjun’s identity. He tells that it wasn’t an accident, but a murder attempt, he was murdered by his own wife Preeta and his elder brother Rishabh. He cries telling her the sorrowful truth that he loved them the most, they cheated him and tried to kill him. He tells that Rishabh wanted to remove him from their lives, Rishabh killed Karan, and married Preeta, they have a daughter Kavya, they snatched everything from him, his identity and existence.

He doesn’t want to spare them. He gears up for reprisal. He feels he is an idiot to find the reason that they cheated him. Anjali tells that its not his fault, he is doing right that he wants to take revenge. She supports him in his revenge plan. She tells that they will not forgive his enemies, but punish them. She hugs him, asking him to relax. What did Karan decide? Keep reading.

Bani misses Karan when she reads the auction news. Rakhi asks Bani what is the matter. Bani tells that Karan had a dream to open a cricket academy for the poor students, so Rishabh and Preeta are going to auction Karan’s cricket bat to raise funds for the cricket academy. She tells that Karan would have been happy seeing this. Prithvi is in some poor locality, playing cards with the chawl neighbors. He gets the newspaper. He reads the auction news. He wishes he could buy Karan’s bat in the auction. He steals some cash from his friends and makes a leave. Preeta goes to Kavya’s room. She asks Kavya to sleep. Kavya hides from her. She asks Preeta to find her. Preeta knows where is Kavya hiding.

She catches Kavya and asks her to sleep. Kavya insists her to tell her some film story. Preeta tells Karan and her love story, saying that Karan and she were the hero and heroine of the film. She recalls their sweet moments. Kavya likes the story a lot. Preeta asks her to sleep. Kareena calls Kavya to her. Kavya asks Preeta to save her from Kareena’s scolding. Preeta also sleeps, while thinking of Karan. Rakhi asks Mahesh to help her in counting the money notes. He asks her from where did she get it. She tells that she knows Mahesh has earned everything by hardwork.

She wants to spend less money and save it for the good cause. She tells him that she has sold the jewellery given by her parents, she got this money to fulfil Karan’s dream. Mahesh asks her the reason. She tells that its Karan’s fifth death anniversary, it was Karan’s dream to help the poor students by opening a cricket academy. She further tells about the auction of Karan’s bat and cricket kit. She wants to buy Karan’s things and keep it with her, and also fulfil his dream by funding the academy. Mahesh hugs her.

Anjali tells her friend that Arjun is Nidhi’s fiancée, she shouldn’t think of anything for him. She praises Arjun’s good character. Anjali’s friend introduces Arjun to her grandma. She insists Arjun and Anjali to stay with them for a day. Karan tells that he will be more comfortable in a hotel. The old lady asks Anjali to not refuse. She asks Arjun to stay with them. Karan tells that no one can dictate him, he will do what he wants. Rishabh asks the manager to arrange the cctv footage of the school. He wants to find the person, about whom he doesn’t know anything. He asks the manager to get to work.

Sameer asks Rishabh what is his worry. Rishabh tells that someone was stalking Preeta, she is so scared. He doesn’t want Preeta to live in fear, after tolerating so much. He misses Karan. He tells that Preeta and Kavya are his responsibility, Karan would have kept them happy. He loved Karan a lot. He tells that nobody can fill Karan’s place. He feels hurt that he is failing to protect Preeta and Kavya. He cries and hides his tears. He asks Sameer not to tell anyone that he cried. Anjali stops Karan from leaving. She tells that it would be good to stay in her friend’s house if he wants to take his revenge on Rishabh and Preeta. She asks him to keep his identity a secret.

She tells that it will be easy for Rishabh and Preeta to unwind his truth, they will know that he is Karan and he is still alive. Karan tells that he doesn’t care. She wants him to stay alert. She asks him to cheat them like he cheated them, he shouldn’t show his true face to them, he should show them a hell. Karan gets encouraged by him. He tells that he will burn them in hellfire. He agrees to stay with her. She shows him the auction news, saying he will be proud of her now. She tells him that it’s a good chance to enter their lives, he should attend the auction and buy Karan’s cricket stuff.

Reviewed Rating for Kundali Bhagya 30th June 2022 Written Update Open war: 5/5 This rating is solely based on the opinion of the writer. You may post your own take on the show in the comment section below.