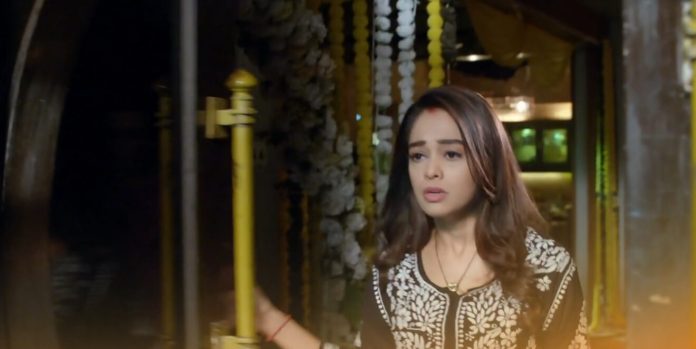 Kumkum Bhagya Prachi final farewell 1st July 2022 Spoilers Kumkum Bhagya episode spoiler – Prachi’s final goodbye Prachi tells herself not to stay here as she will not get anything by remaining with Ranbir. She says that there is her baby’s future ahead and here there is a lie and betrayal. Prachi sees Ranbir and Rhea for the last time and leaves with her bag. She decides to move on in her life for her child and opens the door.

Anupama episode spoiler – Rakhi provokes Vanraj:
Anupama, Barkha, Rakhi, Leela, and Dolly make Kinjal ready and dance around her. Kinjal is brought outside and Paritosh sits with her on a swing. Rakhi provokes Vanraj that Anuj has taken up his responsibility. Vanraj becomes furious. Rakhi tells Vanraj that Anuj is the baby’s grandfather according to the duties he is doing for Kinjal. Vanraj sees Anuj and Anupama laughing with Paritosh and Kinjal.

Mr. Bijoria asks Abhimanyu why he came alone and where is his wife. Neel says that she will come shortly. Abhimanyu goes to get a drink and Mr. Bijoria asks him to enjoy the party. He waits for Akshara but eventually leaves the party. Akshara comes there and doesn’t find him. She also leaves. Abhimanyu’s car keys fall down and Akshara’s gown gets stuck in a fence.

Kairi dances with Aryan on his birthday. Aryan also shakes a leg with her. Suddenly Kairi realizes that her teeth have fallen off and she gets scared that her lie will be out in front of everyone. She searches for it on the floor. Someone picks up her teeth.

Armaan is scared that Rudraksh might see Preesha. Rudraksh feels that she is here only. Ruhi points out to Preesha and informs Saransh about her. Preesha sees both of them and gets puzzled. She walks towards them. Saransh and Ruhi smile and eagerly wait to greet her.

Kaju tries to wake up Neel but suddenly starts laughing. She offers him a drink and he thanks her. Kaju cannot stop laughing and Neel drags her inside. Kaju falls on Neel and they hug each other. They both are stunned. Bhoomi asks Neel if he is possessive about Kaju and tells him that she is just a friend and not his wife.

Woh To Hai Albelaa episode spoiler – Kanha is a hero:

Kanha goes to Anjali and warns her that Sayuri is his wife and if she tried to do something wrong with her then she knows what he can do. Anjali is devastated. Sayuri says that Kanha was looking like a hero and she felt like getting up and whistling for him. Anjali is determined to marry Kanha.

Fanaa episode spoiler – Pakhi leaves Agastya Agastya informs Pakhi that he will wait for her. Mona gives a letter to Agastya. He reads the letter and cries. She blames him for all the wrong things he did. She says that she is leaving him and going far away. He burns the letter and becomes stunned. Naveli, Dadi, and Mona are clueless. Pakhi is going in the car and cries.

Vikram informs the investors about his base oil recipe but Swaran comes in the middle and points out his mistake. The lady says that Swaran has more experience in making the cream than him and she agrees to finance his super product. Vikram becomes happy. The investors offer the deal to Swaran. She gets shocked.

Yohan tells Sejal that he wants to gift her a memory and takes out a bangle. Veera says that it is Aarti’s bangle. Abhishek tells that Sejal and Yohan’s time is over. Yohan asks for Sejal’s hand and she places her hands on his. Abhishek loosens the chandelier. Sejal and Yohan see it coming down. Everyone sees it and gets scared. The chandelier crashes and Abhishek smiles.

Anshul says that Ranveer will top only when he will give his exams. He says that he will not be able to catch a pen or a surgical knife with his hands. Anshul pushes Ranveer and goes away. Ranveer gets angry. Ranveer’s sister calls him and asks to come quickly. Ranveer picks up a bench with his injured hand in anger. Suhani prays that he must cool down.