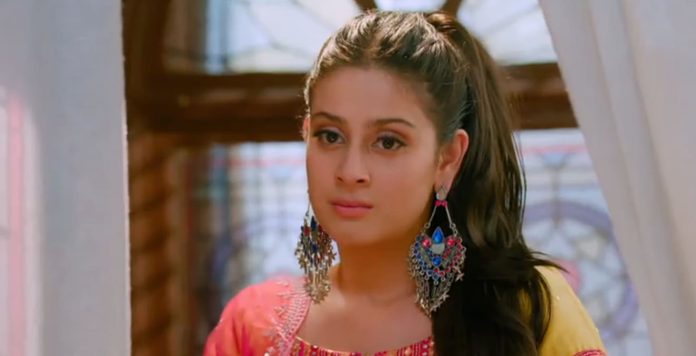 Udaariyaan 1st July 2022 Written Update Fateh confronts Jasmin Fateh feels restless that something isn’t going right, like Tejo is in some sort of danger. He rushes to see Tejo at her house. He reaches home only to see Tejo in tension. Fateh tries to console Tejo. Tejo turns unconscious. He learns the entire incident from Satti. Rupy and the family are already having clashes due to Tejo. Fateh also adds up the tension. Fateh asks the family how did Tejo see the fire in her room, who took the candle to her room. Dilraj had seen Jasmin and names her when Fateh questions the family. Dilraj tells that Jasmin took the candle to Tejo’s room. Satti tells that she had given an emergency torch light to Jasmin to keep in Tejo’s room, stating that Tejo is scared of darkness.

She asks Jasmin how did the candle reach there. Fateh doesn’t listen to Jasmin. He yells at her. He tells that he already told her that Tejo is scared of fire, then how could she take a candle there. He goes mad at the family’s carelessness and Jasmin’s so called mistake. He asks Jasmin is she mad, she knows that Tejo goes violent seeing the fire. He suspects Jasmin’s intentions. Will Jasmin get exposed? When will Tanya come back? Keep reading.

Earlier in the show, Tejo calms down a little. In a low voice, Lovely asks Satti to take Tejo upstairs as she is creating drama in front of guests. This makes Rupy and Satti feel bad. Shiny calls Tejo mental. She asks Sandhus to oust Tejo from the house and send her to a mental asylum. Jasmine laughs secretly. Rupy gets angry at Shiny and asks her to get out. This shocks everyone. Lovely asks Rupy to stop as Shiny has brought a marriage proposal for Abhiraj. Rupy says he won’t tolerate anyone talking ill about his daughter. Jasmine enjoys the show created by her indirectly. She thinks that now even Fateh won’t be able to save Tejo from going to the mental asylum.

Lovely tries stopping angry Rupy from lashing out at Shiny. Rupy doesn’t listen to Lovely and keeps arguing with Shiny. Jasmine pretends innocence and apologizes to Jasleen’s family falsely. She calls Tejo mentally unstable in front of Jasleen’s family in a low voice. Satti stops Rupy and tells Shiny that Tejo hasn’t been like this since the beginning. She reveals that Tejo suffered a big incident, which worsened Tejo’s condition. Tejo recalls a fire incident which presently occurred at Sandhu house. She starts beating something kept nearby. Satti goes to Tejo and Tejo asks her to call Fateh.

Shiny again asks Rupy to send mentally unstable Tejo to a mental asylum. Satti asks Shiny to not say this as the doctor said that Tejo’s condition is improving and she will get better soon. But Shiny keeps talking ill about Tejo, which infuriates Rupy. Jasmine enjoys it when Rupy and Shiny again start fighting verbally. Angry Shiny starts leaving with Jasleen and her family. Jasmine goes to her room and dances in happiness. Satti calls Fateh and requests him to reach Sandhu house as soon as possible as Tejo needs him urgently. Fateh asks Satti if Tejo is fine and why no one at home was picking up his calls. Crying Satti disconnects the calls and starts caressing and calming down Tejo.

Abhiraj and Lovely run behind Shiny and Jasleen’s family. They request Jasleen’s family and Shiny to stop. Fateh reaches outside Sandhu house and sees upset and angry people running outside. He walks inside being worried for Tejo. Shiny angrily asks Lovely to tackle Rupy. She tells Lovely to take a stand for her family in front of Rupy, otherwise her family will get ruined, considering the situation. Inside Sandhu house, an elated Jasmine hears Fateh’s voice and understands that Fateh has come downstairs. Fateh hugs Tejo and asks everyone what happened at home behind him.

Tejo pushes Fateh in anger. She tells Fateh that she won’t talk to him as he left her alone. Outside the Sandhu house, Lovely feels very angry due to whatever happened with her sister Shiny and Jasleen’s family. She feels that injustice happened with her family and son. Fateh makes Tejo lie on the cot. Rupy tells Fateh that electricity went off and Tejo got scared due to the dark and candles kept downstairs. Lovely comes and angrily tells Fateh that Tejo didn’t get scared but instead got an attack. Fateh ignores Lovely and angrily asks who took the candles to Tejo’s room. Dilraj reveals that Jasmine took candles to Tejo’s room.

Seeing Fateh angry, Jasmine gets scared thinking her evilness got caught. Fateh lashes out at Jasmine for being careless towards Tejo, even being aware about her condition and fear of fire. Satti reveals that she sent Jasmine to Tejo’s room with an emergency light. Jasmine stutters and lies to Fateh that the emergency light broke on the way. She says that she was also scared and took lit candles to Tejo’s room forgetting her fear of fire. She screams loudly to confuse everyone. Jasmine says she also has responsibilities towards Tejo like Fateh has and she will keep fulfilling them. She accepts her fake fault and runs away showing off fake tears and anger.

Lovely asks Sandhus and Fateh to send Tejo to the mental asylum for treatment. This angers Fateh. He gets indulged into an argument with Lovely. Fateh and Rupy remind Lovely of the sacrifices Tejo always made for both families. Lovely doesn’t pay heed to Fateh and Rupy’s requests of understanding Tejo’s state. Fateh requests Lovely to continue arguments and solve family issues later, not in front of Tejo today. Abhiraj comes in between and tells Fateh that he can’t talk to his mother like this. He also tells Fateh that he can’t even interfere in his family matters.

Jasmine enjoys the family drama from a distance. Fateh tells Abhiraj that he doesn’t have the right to talk or interfere in Sandhu family’s matters. He says he has full rights to care for Tejo and keep her fine. Fateh takes Tejo away with him. Outside Sandhu house, Fateh and Tejo hug each other tightly. They caress each other’s hair and also pull each other’s cheeks cutely. Fateh and Tejo also kiss each other’s forehead. Fateh leaves with Tejo. At Sandhu house, Rupy once again reminds Lovely and Abhiraj of the sacrifices Tejo always made for their family.

He asks Abhiraj what happened, if one marriage proposal that came for him returned. Rupy reminds Abhiraj that there was a time when he was ready to do anything for Tejo and loved her the most. He also reminds Abhiraj that he promised Tejo that he will always be with her through thick and thin times of life, even when no one will support her. Abhiraj tells Rupy that no one understands that it’s important to get Tejo treated. Rupy tells Abhiraj that keeping Tejo within the family, taking care of her and understanding her is the part of Tejo’s ongoing treatment. He says the doctor said that Tejo will soon get better. Rupy asks if they can’t give some time to Tejo to get well like earlier.

Abhiraj tells Rupy that such treatment takes longer time and sometimes even whole life gets spent to make mentally unstable people fine. On the other hand, Fateh tells Tejo that he is going to take her to a very special place, his home. Tejo gets excited and happy. At Sandhu house, Rupy gets angry when Abhiraj asks him to send Tejo to Fateh’s house. Rupy says he won’t send Tejo to Fateh’s house as she is his responsibility, being his daughter. He says Tejo will live in her house (Sandhu house) only. Lovely screams and says that Sandhu house belongs to her and children too.

Lovely asks Rupy why they will work according to Tejo and her mood swings. She says she won’t live in Sandhu house anymore. This shocks everyone including Jasmine. On the other hand, Fateh and Tejo reach outside Fateh’s house. Tejo gets excited and tells Fateh that his home is very big and beautiful. Fateh makes Tejo happy by telling her that she will soon come to Virk house, becoming his bride. Tejo happily hugs Fateh. She also starts twirling in happiness. Fateh smiles and recalls Tejo’s past Grih Pravesh at Virk house.

He takes Tejo inside Virk house and makes her meet his whole family except Gurpreet and Nimmo as they aren’t present at home. Everyone sees Tejo and recalls their happy times with her. Tejo hides behind Fateh seeing so many people. Fateh one by one introduces Tejo to his family. Tejo gets scared when Fateh introduces Mahi as sister to her. Tejo starts repeatedly saying that sisters are bad….sisters are bad. Fateh makes Tejo understand that Mahi is a good sister and loves her a lot. Tejo gets calmed and shakes hands with Mahi. She says Mahi is nice.

At Sandhu house, Jasmine pretends innocence and tries stopping Lovely from leaving. Satti also tries to stop Lovely. Lovely angrily says either she or Tejo will live in Sandhu house. This decision of Lovely shocks everyone badly, except Jasmine. Jasmine secretly smirks, seeing her plan to send Tejo to mental asylum getting successful. At Virk house, Fateh feels that something is fishy with Tejo’s regular/continuous panic attacks. He makes a call at Sharan Ashram. Through Tejo’s friend Kamal, Fateh gets to know that at Ashram, Tejo used to get panicked and violent once or twice a week, only when she used to get over emotional.

Fateh recalls that whenever Tejo got panic attacks, Jasmine was always nearby and involved. He doubts if Jasmine is intentionally provoking Tejo to get violent. In the next episode, Tejo will hug Gurpreet. This will make everyone, including Gurpreet emotional. At Sandhu house, in front of everyone, Fateh will accuse Jasmine of provoking Tejo to get panicked and violent. He will say that Jasmine hasn’t changed and is evil like earlier. Fateh will also say that Jasmine is just pretending to be good. He will further threaten Jasmine by telling her that he won’t spare her if something again happens to Tejo because of her. Injured Jasmine will look on, shocked and scared.

Reviewed Rating for Udaariyaan 1st July 2022 Written Update Fateh confronts Jasmin: 5/5 This rating is solely based on the opinion of the writer. You may post your own take on the show in the comment section below.