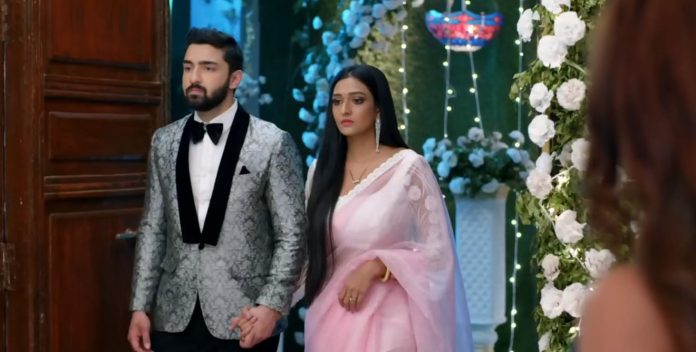 Bhagya Lakshmi 4th July 2022 Written Update Bravo Rishi Rishi saves Lakshmi from Balwinder. He finds her foot hurt and asks her to show it to him. She asks him not to touch her foot. She tells that nothing happened to her. He tells that its bleeding, he has to see her wound. He stops her and cares for her. He tells that sometimes what think or what they try to do, things don’t go as they planned, things happen the opposite way. He promises that he will not let his family members point a finger at her character, he will stand by her. Lakshmi cries. Rishi hugs her and promises to support her. He wipes her tears.

He keeps his promise and brings her to the family, holding her hand. Neelam gets angered seeing them. Anjana creates a scene after learning about Ahana’s pregnancy. She asks the Oberois to ask Ahana the truth, because its not Lakshmi’s fault. She tells that nothing is happening because of Lakshmi. Rishi tells the family that Lakshmi isn’t pregnant, Ahana is pregnant. Oberois are taken by a huge shock.

Earlier in the show, Lakshmi asks Rishi not to spoil his mood by thinking of the past. He asks her if she can forgive him for his mistakes. He tells that he didn’t support her. She tells that Ahana means to her, she is like her sister, she did this for Ahana, she doesn’t know what will happen in their future. She asks him to go out, he is needed outside. He asks her if she is okay. She tells that she is okay. She sets his hair and they get into a moment. She tells that he told sorry to her, but she wanted to thank him. He asks the reason. She thanks him for supporting her in front of Balwinder, when everyone was against her. He tells her that he is able to stand in front of her. He is glad that things are getting fine. On Rishi’s leaving, Balwinder jumps inside the kitchen and catches Lakshmi. Rishi hears her scream and stops.

Balwinder catches Lakshmi in the kitchen. Rishi hears Lakshmi’s scream and thinks of going to check her. Neelam asks Rishi to call the maintenance and find out the matter. She tells him that the mahurat is just till 9 pm and he has to get the power restored. He goes to see Lakshmi. He doesn’t find her anywhere. He sees her slippers left on the floor. Balwinder kidnaps Lakshmi. Rishi gets Lakshmi’s phone there. He worriedly looks for her. Malishka calls Balwinder. He doesn’t answer. She suspects that he is inside the house and might have come to take Lakshmi. She doesn’t want to get exposed in front of Rishi. She tells that if her truth comes out, then Lakshmi’s fate will support her once again.

Rishi looks out for Lakshmi, who is being taken captive by Balwinder. Rishi finds the decorations fallen aside. Lakshmi pushes the things and struggles to get free. Neelam tells that Rishi has gone to get the power restored. She calls it a bad day. She tells Virender that things aren’t going like they wanted. Karishma tells that Lakshmi is pregnant, but still the divorce didn’t happen. Neelam wants to know the reason for it. He tells that they will talk to Lakshmi once the engagement gets done. Karishma agrees with him. Malishka tells Neelam that she wants Rishi’s behavior to change towards her. Neelam tells her that she will talk to Rishi once the engagement is over. Rishi finds Balwinder kidnapping Lakshmi.

He takes a rod and hits Balwinder. He fights Balwinder, and protects Lakshmi from his evil. Balwinder is wearing a mask. His identity doesn’t get known to Rishi. Rishi tries to unveil his face by pulling the mask. Balwinder thinks Rishi is still mad about Lakshmi. Lakshmi thinks of the Markesh and stops Rishi from fighting further. Balwinder tells that Lakshmi is just of him, he will kill Rishi to get Lakshmi back. Rishi tells that he will go and catch the kidnapper. Lakshmi asks him not to go, the kidnapper may hurt him. Rishi asks Lakshmi if he is okay. She tells that maybe its some thief, who has come into the kitchen. He tells that he will check the cctv footage. He asks her why didn’t she fight with the kidnapper.

She tells that she didn’t invite the kidnapper, the lights were off, the thief caught her at knife point. He asks her to take care of herself, he won’t care for her all the time. She thinks he cares for her. He admits he cares for her but she should also take care. He tells that he heard what she told aloud in her heart. She gets hurt, being barefoot. He asks her to show her foot. He finds her foot bleeding. She tells that she is absolutely okay. He insists her to show her foot. She asks him not to touch her foot. Rishi stops her from stopping him. Rishi cares for her. She loves him a lot. She thinks how will she stay without him, if they don’t live together forever.

She wants to tell him that she doesn’t want to end their marriage, she wants to end their distance and unite with him. She wishes to find a way to convey her feelings to him. He tells that she makes him work hard always. He asks her what is she thinking. He tells that she is accident prone when he is around. He asks her to come with him, he shall apply the ointment to her wound. She agrees and holds his hand. Neelam asks why did the inverter switch on. Guard tells her that someone had switched off the mains. Virender calms down Neelam. He tells that its no use to shout on the guards. Neelam sees Rishi and Lakshmi coming inside the door holding hands. She separates them. She asks Lakshmi to not enter the house. She rebukes Rishi for bringing Lakshmi to the family.

Neelam tells that Lakshmi is not auspicious for them, if Lakshmi wants to come, then she can come after Ahana’s engagement. Anjana declares that the engagement won’t happen. She gets Gautam downstairs. Neelam asks Anjana why isn’t the engagement happening. Anjana asks Karishma and Neelam to ask Ahana the reason. Karishma finds Ahana crying and asks the reason. Neelam blames Lakshmi for this. Anjana tells that Lakshmi isn’t wrong, Ahana is wrong, Lakshmi has taken Ahana’s blame on her, the truth is that Ahana is pregnant with her ex-lover, she wants to keep the baby. Neelam asks Anjana not to falsely accuse Ahana. Anjana tells that they are falsely accusing Lakshmi. She asks Ahana to tell the truth to everyone.

Karishma asks Ahana to tell them. Neelam shows her faith on Ahana. Rishi tells Neelam that Anjana is saying the truth, Lakshmi isn’t pregnant, Ahana is pregnant. Virender asks Rishi what is he saying. Rishi tells that it’s the truth. Ayush and Sonia trust Ahana, and tell that Ahana can’t be wrong. Ahana sheds tears. Ayush tells that Ahana is saving Lakshmi. He asks Lakshmi to tell the truth that she is pregnant. He pulls her to get her inside, but Lakshmi stays at the door on Neelam’s orders.

Virender wants to know the truth. Malishka fears that Lakshmi will become great in their sight now. Ahana admits the truth that Lakshmi covered up her pregnancy truth to save her alliance with Gautam. She apologizes to the elders. She shows the real reports and tells that Lakshmi took the blame on her to save her. She adds that Lakshmi supported her for keeping the baby. She breaks down. Rishi consoles her. Anjana asks Gautam and Naresh to come with her. Gautam and his family leaves. The engagement breaks with Ahana’s truth coming out.

Reviewed Rating for Bhagya Lakshmi 4th July 2022 Written Update Bravo Rishi: 5/5 This rating is solely based on the opinion of the writer. You may post your own take on the show in the comment section below.