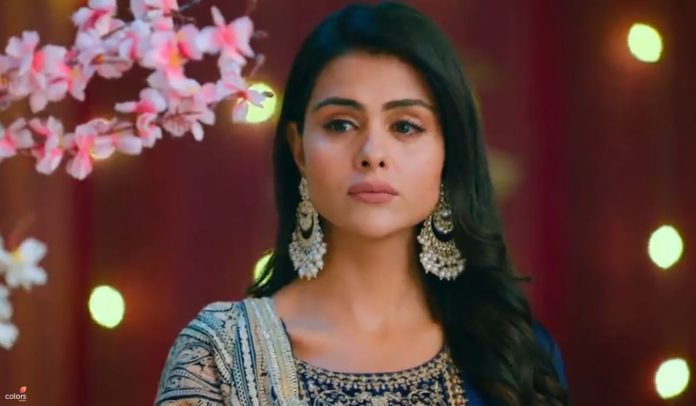 Udaariyaan Gurpreet accuses Tejo 4th July 2022 Spoilers Khushbeer informs everyone that Jasmine met with an accident. Gurpreet blames Tejo for it. She questions Tejo harshly and she gets irritated. Gurpreet tells Rupy to ask the people present in the hospital where people with mental problems are kept or taken away. Rupy is shocked. Tejo cries.

Emily tastes her food and doesn’t like it. She says that she had followed the youtube recipe properly but doesn’t know who added more salt to the food. Emily feels bad that she got scoldings unnecessarily and says that it is so not done. She says a Hindi idiom and it gives out a funny tone. Emily says that she will find out who did this to her.

Simar tells Reyansh that the girl who secretly came into his room was Kavya. She asks him if he called her and put a ring on her finger. Reyansh accuses Kavya and says that poor girls like her use their looks to escape from their poverty. Kavya slaps Reyansh. He is shocked. Simar sees Ishita outside Reyansh’s room.

Muskurane Ki Wajah Tum Ho episode spoiler – Kabir breaks ties:
Kabir gets engaged to Katha. But she feels pain in her stomach and Kabir makes her sit. Uma feels scared that Katha’s truth should not come in front of Kabir’s family. Kabir apologizes to Uma and says that he cannot marry Katha even if he wants to. Rahul smiles while Uma is devastated.

Sirf Tum episode spoiler – Honey’s conspiracy:
Ranveer warns Vikrant that he is putting his life and other family members’ lives in danger due to his ego. Anshul brings a chemical and says that it cuts only irons. He asks Honey to break the fan in Suhani’s room. Honey plays her card nicely when Suhani is sleeping soundly. The fan falls and Ranveer calls out Suhani’s name loudly.

Banni Chow Home Delivery episode spoiler – Niyati feeds Yuvan:
Banni prepares a special meal for Yuvan. Niyati applies cream to Yuvan’s wounds. Banni says that it is a matter of a few days then Yuvan will be happy in his life and she will continue working on her mother’s dreams. Malini feels that Niyati is playing her game correctly and says that Banni’s time in Yuvan’s life is up.