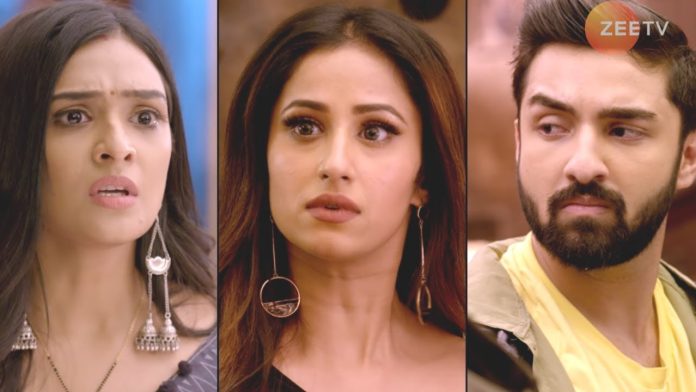 Bhagya Lakshmi 6th July 2022 Written Update Malishka exposed Rishi hugs Lakshmi. He tells her that sometimes things don’t turn out as they want, what they think and what they want to do, it doesn’t result in their desired way. He promises her that he will not let anyone insult her. She cries seeing him. Balwinder pastes the baby’s poster on the wall. He still thinks Lakshmi is pregnant. He asks the baby to come out of the poster and come in his lap. Ayush promises Lakshmi that he will stand by her and always support her, he will become her protector, he will do anything but not let anything happen to her. On the other hand, Malishka meets Balwinder and asks him what will he do now, will he go to Rishi and his family, and tell them that she is the mastermind of this game. She is overconfident.

Balwinder gets an idea, and smiles. Rishi tells Ayush that he will find out how did this happen and why. Ayush asks him to find out who did it. Rishi and Ayush join hands to find out the culprit behind the entire conspiracy. Rishi catches Balwinder and beats him to pulp. He asks Balwinder about the person who informed him of Lakshmi’s pregnancy. He tells that Lakshmi is his wife, he will not tolerate or spare the person who stains her character. Lakshmi tries to stop Rishi when he takes a knife in his hand and goes to stab Balwinder. Rishi scares Balwinder to get the truth out. Balwinder points towards Malishka, leaving the family members shocked. Rishi finally learns Malishka’s truth.

Earlier in the show, Ayush feels sorry that they have accused Lakshmi, which was easy for them to do. He apologizes to Lakshmi. He tells that Rishi is saying right. He folds hands to apologize to her, saying that Lakshmi is a motherly figure for him. Neelam asks Ayush to stop it. Sonia tells that Lakshmi just acts sweet in front of everyone. Neelam asks Rishi why didn’t Lakshmi tell the truth to anyone. She tells that if anything wrong happens, then she will show her worse side to Lakshmi. Lakshmi keeps weeping.

Lakshmi cries sitting in isolation. She tells that she has gone a lot to protect Ahana and the family respect, she has done everything to keep her duty towards them, even then she is called wrong. She wonders if she has done wrong. Rishi comes to console her. He tells Lakshmi that she isn’t bad, they become bad because of the situation, the house situation is bad, but she isn’t bad. He understands that she isn’t at fault, wrong has happened with her, because his family has misunderstood her intentions. He tells that nobody is standing by her, but he knows her well, she can never be wrong.

He believes her and also her intentions. He tells that she has done a lot for Ahana and Gautam’s engagement, her way got wrong because she kept the secret, everyone was against her, she should have gone to someone, but she has no one with her. She tells that she should have come to him to share the secret, but she made a mistake to not confide it. Rishi gets emotional and stops her from leaving. He tells her that he didn’t earn her trust, so she didn’t come to him. She tells that its not his mistake, he has always supported her. He tells that everyone believed Balwinder when the latter blamed her.

She tells that she doesn’t know why Balwinder came or who told him about the pregnancy. She tells that she has done everything to get happiness in the family. She wanted to protect Ahana’s respect. He tells her that he knows her good intentions, things often go wrong, but it’s a promise that he will not let anyone from his family point a finger on her character. He consoles her. He thanks her for supporting Ahana in the tough times. He tells that he will support her now, she can trust him at this time.

Malishka tells Neelam that Rishi has gone against his mom’s words today because of Lakshmi. She adds that Rishi asked her to talk in a low tone. She feels bad. Neelam tells that even she is feeling insulted because of Lakshmi. She wonders how did Ahana share the truth with Lakshmi, Ahana has made Lakshmi a great person in Rishi’s eyes. She asks how did Balwinder come to claim his child when Lakshmi isn’t pregnant. Malishka thinks she has invited this problem by hiring Balwinder.

Moreover, Ayush meets Lakshmi and asks her to give her hand. He makes her slap him. She asks him what is he doing. He tells that she should have beaten him and made him realize his mistake. He regrets that he has insulted her a lot, he doesn’t deserve to become her brother. She tells that she didn’t feel bad. He tells that he deserves her hatred, she should beat him. He knows that Ahana made a mistake, everyone has spared her, but everyone just got after Lakshmi, its not fair. He wants to stand by Lakshmi and do his duty. He tells that he will protect her and stand by her always under any circumstances. Lakshmi asks him to forget everything. He thanks her. She is glad to get her friend and brother back.

She asks what does he want. He tells that he wants Lakshmi and the real Lakshmi, that’s money. She agrees to give him money. She gets hurt on her foot. He asks her to be careful. She taunts him. He is sure that he will get Lakshmi. Rishi punches the bag thinking of Balwinder. Rishi shares his doubts with Ayush. He thinks how did Balwinder know about Lakshmi’s pregnancy, how did he come to claim his child, how did he know about their family matter, someone from the family got him home by passing that information. He wants to find out the conspiracy. Ayush tells that he is also with him in this plan. He makes a plan to nab Balwinder. He shares it with Rishi.

Reviewed Rating for Bhagya Lakshmi 6th July 2022 Written Update Malishka exposed: 5/5 This rating is solely based on the opinion of the writer. You may post your own take on the show in the comment section below.