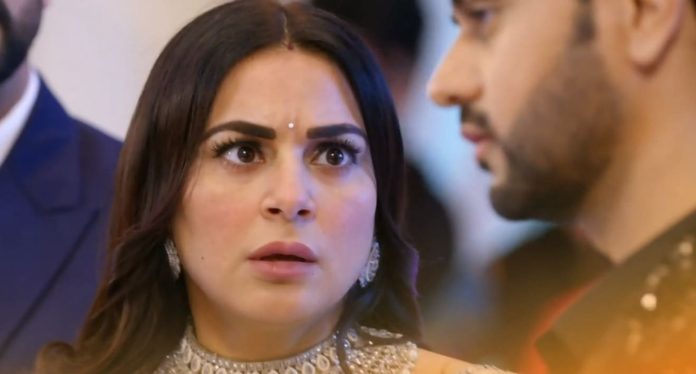 Kundali Bhagya 7th July 2022 Written Update Revelation Anjali tells the media reporters about Arjun. She wants them to know Arjun Suryavanshi, he has come here to stay and rule the business world. She praises Arjun, who is an amazing personality. She meets her cousin. The girl also praises Arjun’s handsome looks. Anjali asks the reporters to talk to Arjun. Anjali tells that every girl likes Arjun. She isn’t jealous that Arjun is Nidhi’s life partner. Her cousin is much interested in knowing about Arjun. Anjali remembers Arjun’s revenge goals. She tells that Arjun has a motive, and she is with him. She doesn’t want to disclose his motives. Arjun makes an entry in the party and stuns everyone. He welcomes the Luthras emotionally. He sees Rishabh as a loving and caring husband for Preeta. Karan loses his cool. He controls his temper, because he has a plan to shock them.

Anjali performs in the party. She represents a story about Karan and Preeta’s love. Preeta gets reminded of Karan. She grows restless when she feels Karan’s presence. She looks for Karan, and happens to see Arjun. Preeta tells Rishabh that she wants to go home. Rishabh asks her the matter. Karan tells Preeta that she can’t go. He is going to make a big revelation that he is Karan. He reminds Preeta of Karan, and thinks to see fear on her face. Preeta gets suspicious of his intentions. He grows jealous seeing her with Rishabh. He finally makes a revelation with he is the Karan Luthra. Preeta is shocked to hear this and stares at him. How will Karan take his revenge? Keep reading.

Rishabh and Preeta reach the party. He asks her why is she tense. She asks why didn’t the family come. He tells that their timings didn’t match, they shall wait and go inside together. Karan keeps a watch on them. Rishabh goes to receive the family members. Preeta sees Arjun’s shadow at the window. Karan hides from her. Karan tells Anjali that it’s a special night, the night won’t pass, the night’s colour won’t get off even in the morning. He calls someone in the party. He sees Preeta’s picture. Preeta enters the party hall. Anjali performs dance on a special song. Preeta gets to see Karan coming.

She remembers Karan when she sees Arjun. She tells Rishabh that Karan has come. Rishabh pacifies Preeta. She gets to see Arjun. She turns away to avoid his stare. The Luthras are excited to see Karan’s stuff in the exhibition. Rakhi and Mahesh miss Karan and wish he was with them. Karan tells Preeta that he was waiting to meet her, because he didn’t expect her to come. Rishabh tells that Preeta always keeps her commitment. Karan asks Rishabh to let Preeta answer. He tells that she did good to come, else the exhibition would have lost its meaning.

He tells the reporters about the reason for the exhibition, that he is the Karan Luthra, he is Karan’s big fan, he has decided to keep the exhibition of his stuff. He asks them not to go anywhere, because he is going to reveal a big secret. Rakhi senses Karan in the party. She remembers the day when she sensed Karan’s coming in advance of his arrival. Rakhi tells the family that her heart told her about Karan. Karan wanted to surprise Rakhi to make her smile.

Rakhi shouts aloud in the party that her Karan has come. She looks for Karan, while he stands opening arms for her, with tears in his eyes. She doesn’t find her Karan there, because she has his old face in her memory. She sheds tears standing at the door. Karan tells that he is in front of her. He misses the family time. He goes to meet Rakhi. She asks the reason for his tears. He drops his phone to make an excuse for touching her feet. She blesses him. Arjun reminds her of Karan. She tells that she will understand him, a mother understands everything. Mahesh asks what’s the matter. She tells that Arjun was taking her blessings, by dropping the phone by an excuse.

Mahesh tells that Arjun doesn’t need any excuse to take her blessings. She tells that she blessed him by her heart. Karan tells that he wanted her hearty blessings. Mahesh thanks Arjun for bringing a genuine smile on Rakhi’s face, Karan used to bring such happiness for them. Karan takes Mahesh’s blessings as well. He excuses himself to go aside and cry for a while. He is angered that Preeta made him away from his family. He wants to ruin her peace. Kritika meets him and is glad to know about him. He gives his card and asks her to make a call if she needs his help. He tells that she reminds him of his sister.

She asks is his sister no more. He tells that she is alive, but not with him. She thanks him for helping her that day. She introduces Arjun to Bani. Karan tells that maybe he has a connection with them, a relation from the last birth. He asks Bani why is she so upset. Bani tells that she misses her grandson Karan, his death has snatched their happiness. She loves Karan a lot. She tells that she feels like Karan is very close to her, he can see them, but they can’t see him. He tells that Karan is there, he feels the same. He asks them to come and see Karan’s cricket collection on display.

He hugs Bani with much affection. Kritika wishes him all the best. Preeta feels disturbed thinking of Arjun’s words. She tells Rishabh that she is going home. Karan stops her, saying she can’t leave the party. She asks the reason. She tells that she is really tired. He hands over a glass of juice drink to her. He asks Rishabh to feed it to her if he wants. Preeta refuses for the drink. Arjun tells that exhibition is going to start, she has to see the entire collection, its really important for him that she stays back. She gets bewildered.

Reviewed Rating for Kundali Bhagya 7th July 2022 Written Update Revelation: 5/5 This rating is solely based on the opinion of the writer. You may post your own take on the show in the comment section below.