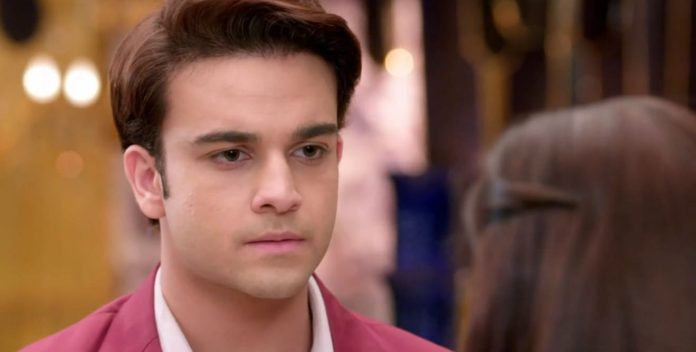 Harshvardhan flings the plate present in Manjari’s hands. Abhimanyu catches the coconut and saves her face. Everyone is shocked. Manjari calls Abhimanyu and Akshara. He asks her if Harshvardhan again told something nasty to her. Manjari says that Harshvardhan has spoken enough and now it is her chance to speak.

Ruhi tells Rudraksh that she is taking out his old jacket. He asks why and she tells that he has to wear those clothes and come to watch the play. Rudraksh says that after Preesha left him he stopped wearing old clothes. She says that he is doing this today for Preesha. Rudraksh is shocked. Ruhi asks Preesha if she will meet her father and she agrees.

Reyansh and Ishita carry out a custom. The videographer motivates Ishita and she walks in style but drops the pot. Everyone is shocked. Geetanjali Devi feels that it is a bad omen for the first ritual of marriage. Simar asks Reyansh what is he doing in a cafe. Reyansh surprises Kavya. Kavya and Chirag are shocked. Simar asks Aarav if he sent Kavya and Chirag to a cafe. He says yes and she feels what is Reyansh doing there.

Katha and Kabir have a romantic moment when Yuvraj sees them. He feels shocked and gets the flashback of the time they spent together. Yuvraj feels that Katha has come to seek revenge from him by marrying Kabir. He says that he will not let her become the daughter-in-law of his family and breaks the glass wall.

Harphoul Mohini episode spoiler – Shocker for Mohini:
Mohini sees blood stains on a cloth and gets terrified. She asks Harphoul to show his wound but he refuses. Mohini remains adamant to see it and tears Harphoul’s kurta. She realizes that he has been shot by a gun. She leaves his arm in anger.

Parineetii episode spoiler – Parineet in danger:
The kidnappers close Parineet’s mouth. Rajeev reaches there to save them but the boss demands her men to kill him. He fights with them. Neetii reaches for help along with Monty. one of the goons takes out his gun and threatens to shoot. He fires the bullet.

Radha Mohan episode spoiler – Mohan-Radha’s banter:
Mohan taunts Radha’s would-be husband and she gets upset. He asks her if her husband makes her cry instead of making her laugh then what she will do. She says that what if he makes her laugh instead of making her cry. Mohan asks her what if he is an atheist. Radha meets her groom and they both touch the same thing in the market.

Fanaa episode spoiler – Agastya petrifies Pakhi:
Tara video calls Pakhi and assures her that she is safe. Pakhi says that she is not getting worried at all as she knows her daughter is very smart and will handle everything. Agastya tells Tara that he will take all the kids at his house for a party. Pakhi panics seeing him at the competition and wonders if he came to know who is Tara.

Spy Bahu episode spoiler – Sejal kills Farid:
Sejal is forcefully taken away from Farid’s dead body. She cries and goes away. Yohan and Drishti reach the location. They both are shocked to see Farid lying in a pool of blood. Drishti is in trauma and Yohan cries when he checks on Farid. The police officers come running and Yohan asks them to check what happened to Farid.

Pratha reaches the closed door and sees inside. Shakti is locked in. Mahek comes and stops Pratha from opening the door. They both look at each other in anger. Pratha and Mahek come into their Naagin form and fight with each other. Pratha harms Mahek.