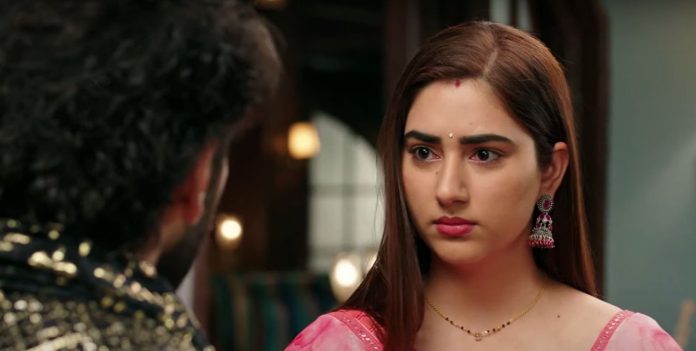 Ram wipes the sindoor off Priya’s nose and Pihu sees him. Priya falls unconscious and Ram catches her. Pihu goes running to see her. She asks Ram to stay away from her mother. The minister says that he did a very nice drama to get the deal. Ram says that Priya is not gaining consciousness and he is putting allegations against him. Ram asks him if he feels all this is a drama.

The doctor informs Swati that Akanksha has terminal asthma cancer. Yatharth is shocked. She asks him whether her daughter will recover and he says that nothing can be done as the cancer is in the last stage. The police inspector threatens Manav to jail him on the charges of killing his ex-wife. Manav feels that his future depends upon Akanksha’s statement and she will never say anything in his favor.

Mose Chhal Kiye Jaaye episode spoiler – Harsh’s confession;
Armaan tells Soumya that only Oberoi telefilms can do justice to her story. He asks her to meet him once and then she will realize that he doesn’t lie or betray. Soumya asks Harsh to sign the confession papers stating that he supported Armaan in declaring her mentally unfit and signed the reports.

Parineetii episode spoiler – Rajeev gets stabbed:
Rajeev and Neetii have a passionate moment. A goon tells Parineet that his life has turned upside done after her entry. He threatens her that he will take her along with him today. Rajeev kisses Neetii’s forehead. Parineet calls Rajeev for help and he comes there. He asks the goon to leave Parineet. He stabs Rajeev.

Navya cries and tells Yug that Shubh will teach him a good lesson. He is about to slap her but Shagun stops him. Navya asks Shubh to take her far away as Yug has lost his mind. She says that she doesn’t want Naina to fall prey to Yug’s madness. Shubh is shocked.