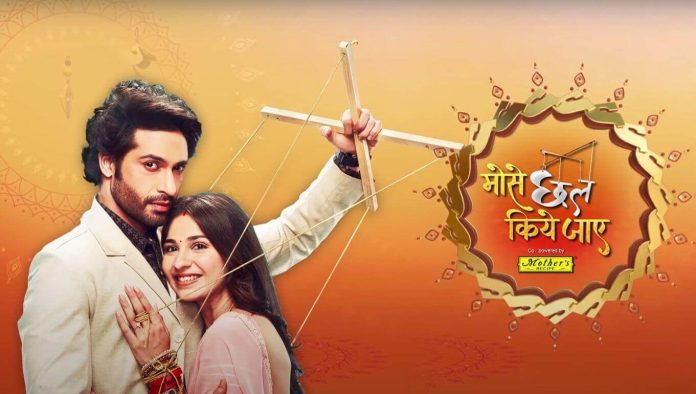 Mose Chhal Kiye Jaaye 14th July 2022 Update Soumya’s condition Armaan comes to meet Anjali to get the book rights for his new show. He thinks the new show based on the superhit novel Maa will get him the number one position in the entertainment industry again. He tries to use his charm on Anjali. He tells that his wish to meet her is finally fulfilled. Soumya replies that every wish that gets fulfilled isn’t necessary to be good for him. She comes into the light, and shocks him by revealing that she is Anjali for him. She tells that it’s the last way for him to save his sinking business and name by getting her novel rights. She makes an offer to him.

She tells him that it’s the third day of his challenge, she has signed the divorce papers, and now he has to tear the papers in front of her. She clears that even she wants the divorce from him, but at the time when she wants it. She asks him to make a choice now. Soumya keeps her conditions in front of him. Armaan isn’t surprised, but didn’t expect this twist. Later, Goldie meets them. He tells Armaan that he is there to give him a professional advice. He asks Armaan to sign the papers.

Soumya scares Armaan by telling that she will give the novel rights to any other producer after the five minutes she allotted him to think. Armaan gets into a pressure to agree to Soumya. Armaan has no support from Sushma and Harsh at this time. He thinks of his poor financial state, that his investments are at use right now. He has to make a new show to save his sinking business. Armaan decides to shake hands with Soumya and get the novel rights, by agreeing to her conditions.

Reviewed Rating for Mose Chhal Kiye Jaaye 14th July 2022 Update Soumya’s condition: 3/5 This rating is solely based on the opinion of the writer. You may post your own take on the show in the comment section below.