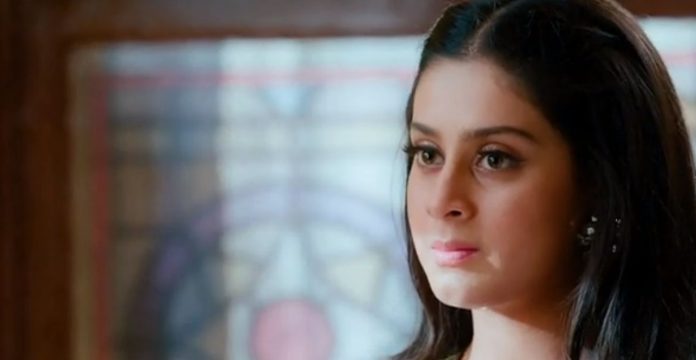 Udaariyaan 16th July 2022 Written Update Jasmin’s goal Fateh is seen in his college. He receives Buzzo’s call and assures him that he will complete his work. Fateh checks his phone and finds that he got many missed calls from Tejo. He tries calling back Tejo but she doesn’t receive it. Fateh then calls Sunita but it comes unreachable. Worriedly, Fateh runs back home to see if Tejo is fine. Tejo on the other hand is seen crying and covering herself with thaal to save herself from children pelting stones at her. Fateh returns to his home and finds that 4-5 children are throwing stones at Tejo and making fun of her.

Fateh tells Tejo that he will buy a new phone for her. He asks Tejo to not worry and stop crying. Sunita returns home from outside. Angry Fateh takes Sunita aside and questions her where she was. Sunita tells Fateh that Tejo was demanding to drink cold drinks. She says when she refused to get a cold drink for Tejo, Tejo started throwing house stuff here and there. Sunita tells Fateh that with no option left, she went to get a cold drink for Tejo after locking her inside the house. Fateh asks Sunita why she took more than 2 hours to bring a cold drink.

Sunita tells Fateh that she didn’t get a cold drink from a nearby shop, so she went to a far away shop. Fateh angrily fires Sunita from the job and owes her for her carelessness towards Tejo. After Sunita leaves, bad and evil neighbors come and start scolding Fateh for keeping mentally unstable Tejo in their neighborhood. They falsely accuse Tejo of throwing stones at children. Fateh gets angry and tells neighbors that not Tejo but their insolent children were throwing stones at Tejo. He tells neighbors that their children were also making fun of Tejo.

Neighbors don’t pay heed to Fateh’s true words. They threaten Fateh by telling him that they will file a police complaint against him. Neighbors ask Fateh to either leave their neighborhood with Tejo or send Tejo to a mental asylum. Fateh tells neighbors that Tejo isn’t mental but just not like them. Neighbors again threaten Fateh with the police’s name. Fateh convinces neighbors to give a day to him. Neighbors agree and leave. Tense, Fateh wonders what he should do now. Fateh goes inside and calms a scared and disturbed Tejo.

Tejo tells Fateh that she doesn’t want to live in a bad neighbor’s neighborhood. Fateh tells Tejo that they won’t live in this neighborhood anymore. He also tells Tejo that her strong Fateh made everyone run away. Tejo gets happy and smiles. At Sandhu house, Gurpreet tells Rupy and Satti that Tejo was staying inside a locked house for 3 hours. Rupy tells Gurpreet that he can’t believe it as Fateh takes proper care of Tejo. Gurpreet tells Rupy that the truth won’t change, even if he believes it or not. She says Fateh has to go out for a job and can’t stay 24/7 with Tejo. She says neighbors called Buzzo and told him that they gave warning to Fateh.

Gurpreet reveals that neighbors threatened to file a police complaint against Fateh if he will keep Tejo in their neighborhood for any time. She tells Rupy and Satti that being Tejo’s parents only they can do something in this matter. At Fatejo’s new house, Tejo freshens up and comes out wearing Fateh’s shirt. Fateh gets happy seeing Tejo wearing his shirt. Tejo tells Fateh that she will also become strong like him wearing his T-shirt. Fateh smiles and laughs hearing this. He hugs Tejo and finds her hair wet. Fateh helps Tejo in drying her hair with a towel. He feels worried for Tejo. At Sandhu house, Gurpreet tells Satti and Rupy that they can prove Fateh and Tejo’s wedding as illegal.

After this, Fateh makes Tejo sleep and also falls asleep himself. Satti on the other hand, tells Gurpreet that if Tejo gets fine in future, the final decision will be taken by Tejo. She says she and Rupy will accept Tejo’s decision as her fate and God’s will. Satti tells Gurpreet that she and Rupy won’t commit a sin of getting Fateh and Tejo’s wedding dismissed. Gurpreet asks Satti and Rupy, how they can be so selfish. Rupy tells Gurpreet that not they, but she is selfish in actuality. This shocks Gurpreet and Jasmine too, who are overhearing others’ talks as usual. Satti asks how she can even think of breaking Fateh and Tejo’s relationship/wedding.

Gurpreet feels worried about Amrik’s unborn child. Jasmine disconnects the calls excusing herself. She pretends innocence and apologizes to Gurpreet for not making her talk to Yash. Jasmine tells Gurpreet that she got confused thinking how she will introduce her to Yash. Gurpreet just smiles in reply. Rupy asks Jasmine when she is calling Yash home to meet her family. Jasmine lies to everyone that Yash is busy in his new album/song’s preparations. She says Yash came all the way to India, from Canada, for his song’s preparations. In front of Gurpreet, Jasmine intentionally tells Rupy and Satti that after marriage, she and Yash will go and settle in Canada.

Jasmine says even her upcoming child will get Canadian citizenship. She tells Rupy and Satti that she will soon make them meet Yash. Jasmine also tells Rupy and Satti that Yash’s parents are arriving next week. This information increases Gurpreet’s worries. She leaves and secretly smiles evilly. At Fatejo’s house, Fateh wakes up from a nightmare, in which Tejo was screaming for help. He feels worried by even thinking about leaving Tejo alone at home. Fateh thinks that he wouldn’t have forgiven himself even if something would have happened to Tejo. He recalls, neighbors threatening him to file a police case against him.

Next morning, Satti visits Fatejo’s house. She wakes up Fateh. Fateh takes Satti’s blessings by touching her feet. She convinces Fateh to take the food she brought for him and Tejo. Fateh apologizes to Satti for not being able to take proper care of Tejo. Satti tells Fateh that no one can take proper care of Tejo, better than him. She tells Fateh that everyone knows what happened with him and Tejo yesterday. Satti tells Fateh that she and Rupy know that he can take good care of Tejo but they want to help him a little. She explains to Fateh that someone trustworthy should be with Tejo in his absence (when he goes to work).

Satti explains and finally convinces Fateh to come and live in Sandhu house with Tejo. Later, Fateh put two conditions in front of Rupy to stay in Sandhu House with Tejo. He tells Rupy that he will have to accept rent for his and Tejo’s stay at Sandhu house. Fateh says he agreed to live at Sandhu house only for Tejo’s safety in his absence. Fateh tells Rupy that he will do each and every work of Tejo himself. He says he will cook food for Tejo, wash her clothes and make bed for Tejo himself. Dilraj happily takes Tejo with him to play. Emotional Rupy hugs Fateh. He tells Fateh that Tejo is very lucky that she got such a loving husband like him.

On the other hand, Fateh meets Jasmine. Jasmine pretends innocence and caring towards Tejo. Fateh tells Jasmine that he and Tejo will live at Sandhu house now. He warns Jasmine to not dare trouble Tejo even a bit. Jasmine lies to Fateh that she doesn’t have anything to do with Tejo and him now. She says that she is soon getting married and leaving for Canada. Fateh tells Jasmine to do whatever she wants to do and go anywhere she wants to, as he has no issues with it. He leaves warning Jasmine to not do something wrong that will make him teach her a lesson. Jasmine smirks evilly and thinks that she will bring Fateh back to her life just like how she brought him to Sandhu house.

In the next episode, Jasmine will get shocked, when Gurpreet will ask her to meet Yash’s parents. On the other hand, Fateh will return to Sandhu house, tired from work. Like a good wife, Tejo will massage Fateh’s head to relieve his whole day’s stress and tiredness. Seeing Tejo’s caring nature towards Fateh, Sandhus will smile emotionally. Angry Jasmine will determine to get Fateh back at any cost.

Reviewed Rating for Udaariyaan 16th July 2022 Written Update Jasmin’s goal: 2/5 This rating is solely based on the opinion of the writer. You may post your own take on the show in the comment section below.