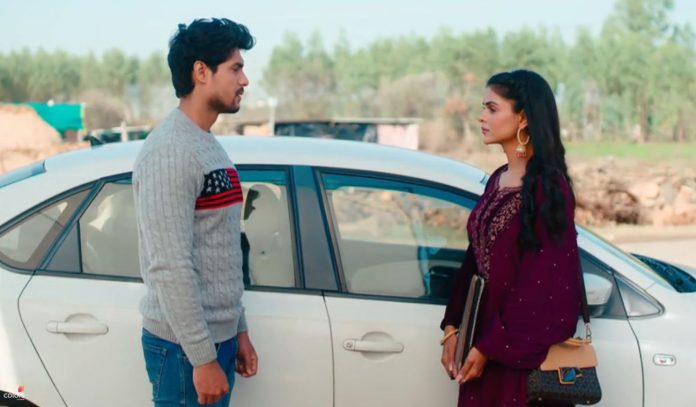 Udaariyaan 20th July 2022 Written Update Tejo condemns Fateh Fateh reaches the godown where Jasmine took Tejo. He gets worried seeing Tejo unconscious. Fateh takes Tejo to hospital on the stretcher with police’s help. Jasmine on the other hand is seen at a clinic. She asks the doctor if her baby is fine. Doctor tells Jasmine that yes her baby is fine. She makes the doctor call her parents. Doctor tells Rupy and Satti that Jasmine is unwell and at the clinic. Tense Rupy and Satti leave searching for Tejo and run to Jasmine.

At the clinic, Jasmine tells Satti and Rupy that Tejo left from the auto leaving her hand and also pushed her. She says because of the push, her stomach started paining. Satti and Rupy get teary eyed. Jasmine pretends to blame herself for Tejo’s disappearance. She keeps indirectly provoking Satti and Rupy against Tejo. With provocation, Jasmine also pretends to be worried for mentally unstable Tejo’s whereabouts. At hospital Fateh feels bad seeing Tejo’s condition. He blames himself for not being able to protect Tejo. Doctor tells Fateh that Tejo is fine but in trauma. Fateh keeps looking at unconscious Tejo.

Tejo starts gaining consciousness. She starts having flashbacks of the fire incident she faced 6-7 months ago. Tejo wakes up and gets angry and scared seeing Fateh. She keeps asking Fateh to stay away from her. Tejo accuses Fateh and Jasmine of trying to kill her by burning her. Fateh gets confused as well as shocked. He tries going near Tejo to understand what she is saying and explain to her the situation. Fateh shows their bond chunri to Tejo but she fails to remember her past few days with Fateh.

Tejo screams for help. She tells Fateh that she is feeling scared of him. This hurts Fateh. Doctor comes inside Tejo’s ward hearing her screams for help. Tejo tells the doctor that Fateh wants to kill her and she is scared of her. She also tells the doctor that she was going to get married today. Teko asks the doctor to call her family and Angad. She says her parents and Angad must be worried and waiting for her. Tejo again asks the doctor to send Fateh outside. She tells Fateh that she hates him the most now. Fateh understands that Tejo has regained her memory. He gets happy and thanks God for this.

Rupy on the other hand calls Harman to come to the clinic as Jasmine is unwell. They say they are trying to find Tejo too. Jasmine asks Rupy to find Tejo anyhow. Fateh calls Rupy and tells him that Tejo has regained her memory. Due to some loud noise from nearby, Rupy fails to hear this. Fateh tells Rupy that Tejo is fine and with him at City Hospital. Rupy hears this and gets happy. He tells Satti and Jasmine about it. Jasmine gets happy knowing that Tejo has been found. She grins evilly thinking that Tejo’s mental condition would have gotten more critical by now. Unaware of the truth, Jasmine smiles evilly thinking that now no one can stop Tejo from going to a mental asylum.

Satti shows reluctance in leaving ill Jasmine alone. Jasmine convinces Satti and Rupy to go to Tejo as she will manage herself. At Virk house, Simran is seen trying to convince Khushbeer to have something. She reminds Khushbeer that he hasn’t eaten anything since yesterday. Simran tells Khushbeer that he will get unwell this way. Khushbeer refuses to have anything cooked by Gurpreet. Emotional and Guilty Gurpreet sits near Khushbeer. She asks Khushbeer to forgive her as she has realized her mistake. Gurpreet says to bring Amrik’s child home, she ousted her own son Fateh from the house.

She says that she isn’t a good mother. Gurpreet says now Fateh will be angry with her and won’t even talk to her. She also says that Fateh would be blaming her for Tejo’s disappearance. Seeing Gurpreet guilty of her mistake and crying, he asks her to atone for her mistake. Gurpreet asks Khushbeer to tell her how to atone for her mistakes. She also asks Khushbeer if Fateh will agree to her and return home. Everyone except Nimmo, smiles when Gurpreet says that she will even accept Tejo wholeheartedly. Khushbeer tells Gurpreet that Fateh won’t say No to his own mother. At the hospital, Tejo recalls the fire incident that she faced 9 months ago.

Tejo stops the doctor from giving her an injection. She asks the doctor how she can give an injection to a pregnant woman. Doctor checks Tejo’s reports and tells her that she is not pregnant according to her reports. This enrages Tejo and she accuses the doctor and nurse of being involved with Jasmine and Fateh in the plan of killing her and her child. Doctor calms down Tejo. Tejo asks the doctor to call Angad as he knows everything. Nurse tells Tejo that she might have lost her child in the accident she faced 9 months ago. She tells the doctor that Tejo faced a similar and major fire accident 9 months ago.

Nurse says everyone thought that Tejo died in that fire. Tejo gets shocked hearing all this. Nurse tells the doctor that she knows that Tejo is MLA Rupy Sandhu’s daughter. She says 9 months ago, everyone tried searching for Tejo a lot but they didn’t even find Tejo’s body at that time. Nurse says she was present at the time and place of the fire accident that Tejo faced 9 months ago. Tejo gets shell shocked hearing that 9 months have passed since she faced the fire accident and lost her child. Nurse shows the date and year to Tejo in her mobile. Tejo recalls how 9 months ago, Fateh called off their Roka Ceremony.

She also recalls Fateh accusing her of wishing to have a rich husband. Tejo further recalls how her and Fateh’s intimate video was leaked in front of everyone. She recalls telling Angad that she is pregnant. Tejo asks the doctor to call the police as she wants to give a statement against Fateh to the police. She says that Fateh tried to burn and kill her by setting fire 9 months ago. Fateh brings Jalebis for Tejo. Doctor stops Fateh from going to Tejo.

Fateh recalls that some time ago, the same Tejo was yearning for him and only remembered him. Doctor tells Fateh that Tejo thinks that she is pregnant but she isn’t. Tejo asks the doctor to call police as Fateh tried killing her and killed her unborn child. Hospital guards take Fateh away from Tejo. At Virk house, Khushbeer asks Gurpreet if she won’t say anything ill to Tejo now, by coming under someone’s influence. Nimmo looks angrily at Khushbeer. Gurpreet tells Khushbeer that she won’t say anything ill to Tejo now. Khushbeer tells Gurpreet and his rest of the family that now Tejo is their responsibility. He tells his family that now they have to take care of Tejo like she used to take care of them in the past.

Fateh’s grandmother asks Khushbeer to bring Tejo to Virk house as now it’s their turn to take care of her. At hospital Fateh again tries to meet Tejo by taking a ward boy’s get up. He shuts Tejo’s mouth before she could scream. Fateh convinces Tejo to not scream. Fateh tries telling Tejo that he understands that she faced much wrong. He also tells Tejo that he also got hurt seeing her hurt. Fateh promises Tejo that now he won’t let anything happen to her and they will live together. He tells Tejo that they will start afresh and everything will get better. Tejo asks Fateh if he can bring her child/baby back. Fateh gets quiet.

Tejo accuses Fateh of killing his own child. Fateh asks Tejo why he will kill his own child. Tejo accuses Fateh of being deceitful. She accuses Fateh and Jasmine of ruining her life. Tejo asks Fateh where Angad is. She says Angad even warned her but she took a stupid step. Fateh tells Tejo that he can’t try to kill her as he loves her. Tejo tells Fateh that he tried killing her out of his selfishness. Police arrive and take Fateh away on Tejo’s statement that Fateh tried killing her by burning her alive. Doctor comes and calms down Tejo.

In the next episode, Tejo will tell Virks and Sandhus that she was pregnant with Fateh’s child 9 months ago. She will also tell everyone that Fateh and Jasmine deceived her and killed her child. Tejo will say that she won’t ever forgive Fateh and Jasmine. This will shock everyone. On the other hand, Fateh will scare Jasmine by taking her to the same godown, where she tried burning Tejo. He will scare Jasmine with a fire stick. Jasmine will ask Fateh why he is doing this. Fateh will tell Jasmine that he will make her feel the same, how Tejo felt when she was about to burn alive. He will question Jasmine that who is responsible for whatever happened with Tejo today. Jasmine will get shocked and scared by Fateh’s anger.

Reviewed Rating for Udaariyaan 20th July 2022 Written Update Tejo condemns Fateh: 2/5 This rating is solely based on the opinion of the writer. You may post your own take on the show in the comment section below.