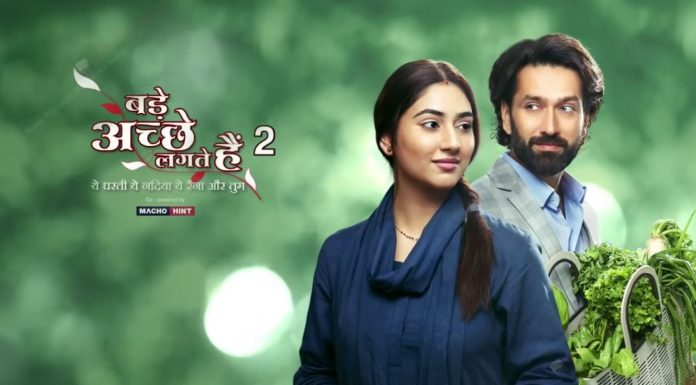 BALH Udaariyaan Appnapan Kaamna Top 6 Spoilers Bade Achhe Lagte Hain episode spoiler – Ram in dilemma Nandini blames Priya that she purposely kept Pihu with Ram. Priya is stunned. The reporters question Ram about why he and Pihu are alone. They ask him if he is trying to separate mother and daughter by taking Pihu’s custody. Ram is shocked.

Pallavi brings a cake to celebrate her mother’s birthday. They both cut the cake. Badal and Gagan blast the birthday crackers. Pallavi feeds the cake to everyone. All are happy and dance together. Harsh stands at a distance and sulks. Pallavi asks Ranveer to come with her to a lawyer. Shanky is shocked to know that Nikhil has decided to celebrate with his family this time.

Sakshi comes looking for her mother-in-law. She gets shocked to see Akanksha spitting blood. Sakshi and Akanksha’s mother makes her sleep on the bed. Akanksha’s mother asks Sakshi to go through her reports once. Sakshi is stunned to know that Akanksha has stomach cancer. Yatharth is disturbed seeing Akanksha’s state.

Armaan tells a story to the production house but they do not like it. They cancel the deal. Soumya informs Armaan that he is going according to the old times and this is the reason why his last 12 shows have miserably flopped. She advises him to go along with the time or his time will change.

Gurpreet becomes emotional and informs Tejo that the mangalsutra and sindoor are put by Fateh on her. Tejo is taken aback. She immediately removes her mangalsutra without a thought and places it on Fateh’s hand. She tells sorry to him and declares that she cannot consider this marriage. Fateh is devastated. Gurpreet and Rupy are alarmed.

Giriraj asks Chitra what is she doing and she replies that she is doing the duty of a mother. He asks her if she has gone crazy and whether she knows what Geetanjali Devi has decided. Chitra says that this marriage will happen and she doesn’t care if Giriraj’s family members agree with it or not. Giriraj informs Geetanjali Devi that Ishita and Reyansh are getting married. Everyone is shocked. Chitra welcomes Ishita.