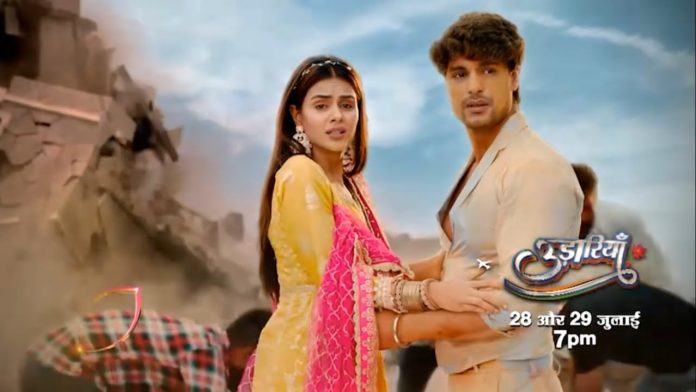 Udaariyaan Promo Update 25th July 2022 Tejo love confession Udaariyaan episode spoiler – Tejo’s love confession The building crashes and Tejo shouts Fateh’s name loudly. She finds him trapped inside the bricks and pulls him out. Tejo hugs Fateh and says that she doesn’t wish to live her life without him anymore. She says I love you to Fateh. A baba asks them to stay united as there are several hardships on their way.

Hriday blindfolds Radha and tries to inappropriately touch her. Gungun comes into the room and asks him to stay away from Radha. She questions Hriday what was he doing in the room. Damini orders Hriday that Gungun should not come back home in one piece. He pushes Gungun down the stairs. Gungun shouts loudly.

Rajveer is a badass Punjabi munda. He is flying a kite and defeats Lala. His friend goes to get the kite but Rajveer stops him and says that no one can touch his kite. He runs to get it. Rajveer gets his kite but Lala stops him. He bashes up Lala when he demands the kite from him.

Rani says that she enters a house when she is given an invitation otherwise she keeps roaming around. She says that once she enters she will present a lot of things but in return will snatch away the happiness. Rani laughs thunderously and walks around in her anklets.

Pratha sadly gets ready for her second marriage. Rishabh looks at Pratha’s picture and misses her. He sees Pratha getting married and feels that he lost his love. Rishabh slips in the fire and dies. His body is brought into the house while Pratha does her griha pravesh. Rajesh tells Pratha that she got her revenge but she says that Rishabh never betrayed her and the game was played by Mahek and Urvashi. She cries as Rishabh dies.