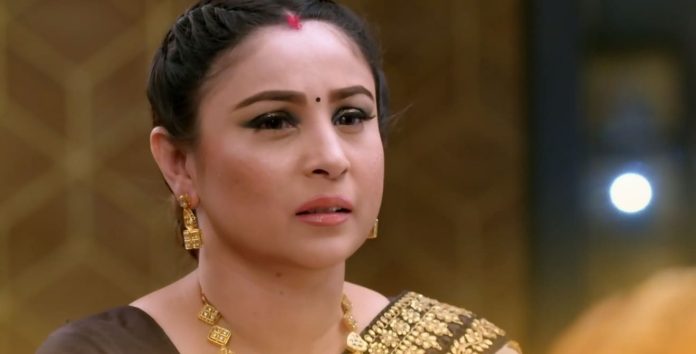 Kumkum Bhagya Shock for Pallavi 28th July 2022 Kumkum Bhagya episode spoiler – Prachi-Rhea’s babies The lady guest informs Pallavi that when she held Rhea’s hand she did not feel anything but Prachi’s baby will bring a lot of good luck and happiness. She says that Rhea’s baby will bring bad luck. Pallavi is stunned. The lady says that Prachi’s baby is lucky for their house and Rhea’s baby is unlucky.

Katha tells Yuvraj that he acts very innocent in front of his family but they don’t know that he is an animal. She asks him that if he thought she will see him and keep quiet due to fear. She reminds Kabir that he had promised to search for her wrong doer and punish him and says that Yuvraj is the one. She says that his brother Yuvraj destroyed her life.

Yeh Hai Chahatein episode spoiler – Preesha remembers Saransh:
Armaan decorates the bed with flowers for Preesha and plans for their first night. He says that once Preesha becomes his then Rudraksh or his kids will not be able to separate them ever. Saransh decides to play with fire to bring back Preesha’s memory. Saransh plays guitar and a wooden stick with fire comes near his legs. Preesha calls out Saransh. Rudraksh is stunned. Saransh becomes very happy.

Ajooni episode spoiler – Rajveer’s love at first sight:
Ajooni tells Avinash that he scared her. He says that he was purposely doing a remedy so that they both are safe from evil eyes. She says that no one can come between them now. Ajooni slips on marbles and Rajveer catches her. He falls madly in love with her.

Na Umra Ki Seema Ho episode spoiler – Dev’s expensive ring:
Dev gives a ring to Vidhi as compensation for her loss. Amy teases Dev if Vidhi will tell everyone what she saw. Dev’s sister asks him where is his ring and he says that he gave it to someone. Vidhi shows the ring to her family members. Her mother and sister find it useless. But her father asks everyone to close all the doors and windows.

Bohot Pyaar Karte Hai episode spoiler – Ritesh gets falsely accused:
Manjeet Chawla declares that Ritesh was doing drugs at the party and people like him should be in jail. The media question Ritesh for rubbing his nose at the party and release a video. They ask him that what was he hiding. Sameer becomes very happy. Ritesh is shocked.

Channa Mereya episode spoiler – Aditya-Ginni’s moment:
At the sangeet function, Amber and Supreet dance together along with their other family members. Amber opens an alcohol bottle and the drops go into Aditya’s eyes. He slips and falls in Ginni’s arms. They lovingly look into each other’s eyes.