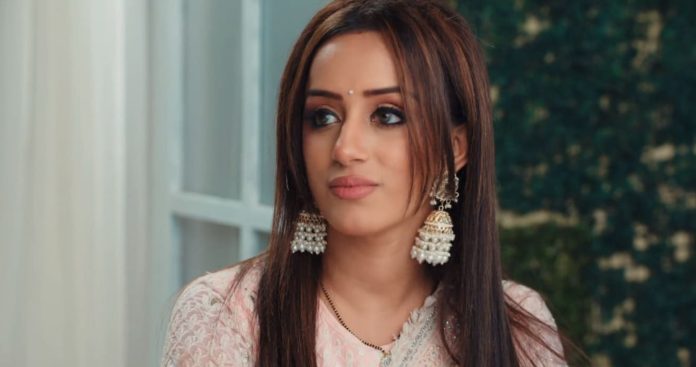 Yeh Hai Chahatein 27th July 2022 Update Revelation for Prisha Kanchan says Prisha was praising Shimla resort a lot. She asks Pihu what is the resort’s name, in which Armaan and Prisha are staying. Pihu reminds Kanchan that she already told her the resort’s name and showed her the photographs too. She says Prisha told her that the resort looks more beautiful in real life. Digvijay says the trip goes well if the stay turns out to be good and satisfying. Pihu leaves to pack her stuff for the trip. She tries to ask Kanchan and Digivijay how many family members are there in their house. Digivijay asks Vanshika why she needs this information. Vanshika says it’s the company’s policy.

She stands outside and tries overhearing Pihu and Prisha’s phone conversation. Vanshika hopes that she will get information about Prisha’s location this way. In Shimla, Rudra and Saaransh tie the mannat thread on the holy tree. Rudra prays to God to make him reach Prisha quickly and anyhow. He says he feels that Armaan is going to do something more bad with Prisha. Rudra requests God to fulfill his wish. Saaransh also wishes for the same. On the call, Prisha tells Pihu that she is missing her and her parents. Pihu and Prisha keep talking about the resort and Shimla’s weather.

Digivijay catches Vanshika standing outside Pihu’s room. Vanshika makes an excuse to save herself from Digvijay. Digivijay makes Vanshika walk away from nearby Pihu’s room. In Shimla, Saaransh prays to God to make him and Rudra quickly reach Prisha as they need to separate Armaan from Prisha. He says Armaan is doing wrong with Prisha. Both Rudra and Saaransh request God to help them. At the same time, in Delhi, Vanshika overhears Pihu taking Nieve resort’s name. Vanshika gets happy and leaves Thakur house. While standing outside the Thakur house, Vanshika calls Rudra. She tells Rudra that God did magic as she got to know where Prisha is staying in Shimla.

Saaransh and Rudra get happy when Vanshika tells them that Prisha is staying at Nieve Resort in Shimla. Rudra and Saaransh thanks Vanshika. Later, Rudra and Saaransh reach Nieve Resort. Rudra asks Saaransh if he thought of anything to bring back Prisha’s memory. Saaransh looks here and there. He notices the stuff and activities going on around him. Saaransh sees the bonfire and reminds Rudra how once Prisha saved him from burning. Rudra recalls how once Prisha catched the burning stick which was going to fall on him. He also recalls that Prisha’s hand burnt badly while saving Saaransh. Rudra further recalls that Prisha told Saaransh that he is her life and she can even give her life to save him. Flashbacks end.

Saaransh asks Rudra how they will keep Armaan away from Prisha to start their mission. Rudra tells Saaransh that he has a plan to keep Armaan away from Prisha for some time. Armaan pays a lot of money to the resort staff for perfectly arranging and decorating a room, exactly as he wanted. He checks out the room he got decorated to get intimate with Prisha. Armaan thinks that now no one can stop him from getting intimate with Prisha. He thinks of mixing something wrong in Prisha’s champagne to make her lose her senses. Armaan thinks that Prisha won’t be able to stop him from getting intimate with her due to not being in her own senses.

He says today will be his and Prisha’s first night in true sense. Armaan also thinks that once Prisha gets intimate with him, then Rudra and his children won’t be able to separate Prisha from him ever again. Prisha calls Armaan on his room intercom. She tells Armaan that she is feeling very exhausted and having a severe headache. Prisha requests Armaan to cancel their today’s dinner. Armaan controls his anger and asks Prisha to have rest. It turns out to be Rudra who talked to Armaan in Prisha’s voice, using a voice-changing app. Rudra gives money to the resort staff for helping him. Saaransh and Rudra get happy after fooling Armaan.

Rudra tells Saaransh that they will do the same with Prisha that they did with Armaan. He records a voice note on his phone. Rudra calls Prisha from the resort landline like he called Armaan earlier. He makes Prisha listen to his voice note in Armaan’s voice. Prisha receives the call and hears Armaan asking her to cancel their dinner plan as he is feeling exhausted. Rudra and Saaransh get happy. They start working on their plan to get Prisha’s memories back. Rudra explains to Saaransh that he tied an iron wire on a particular stick which he will be controlling with his hands.

He also explains to Saaransh that when Prisha will come to save him from falling burning stick, he will immediately push the burning stick away from him and Prisha. Rudra tells Saaransh that this way no one will get injured. Saaransh thanks Rudra for organizing things to keep him and Prisha safe. Rudra tells Saaransh that he can’t ever let anything happen to his son and wife. Saaransh and Rudra start executing their plan in hope that Prisha will get her memories back. Saaransh sits on a bench near a bonfire, which is also visible from Prisha’s room’s balcony. Rudra sits on a nearby bench. Prisha watches and hears Saaransh singing a beautiful song while playing guitar, through her balcony.

In the next episode, a tense Prisha will run to Saaransh. Saaransh and Rudra will be hopeful. Ruhi on the other hand will tell Sharda that she intentionally came away from home so that Rudra and Saaransh stop fighting with each other. She will tell Sharda that they will be able to find Prisha only when Rudra and Saaransh will stop fighting with each other. In Shimla, Prisha will tell Saaransh that she saved him from the burning stick beforehand too. Saaransh will tell Prisha that she is his mother. This information will shock Prisha.

Reviewed Rating for Yeh Hai Chahatein 27th July 2022 Update Revelation for Prisha: 3/5 This rating is solely based on the opinion of the writer. You may post your own take on the show in the comment section below.