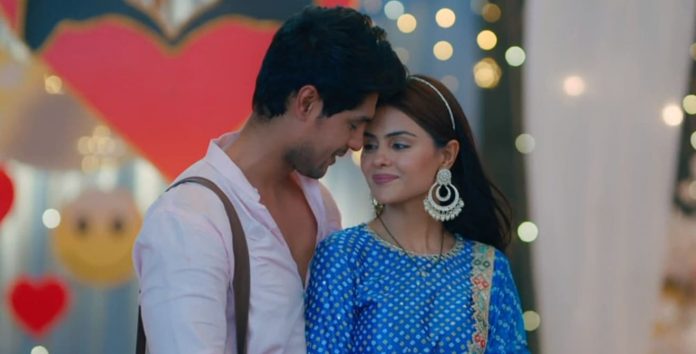 Jasmine tells Satti she herself couldn’t understand what she should do. She says that she feels like she is absolutely alone in this world. Satti tells Jasmine that she and her father are always there for her. Jasmine tells Satti that she knows all this. She also tells Satti that she always feels that since childhood everyone loved Tejo more and has always hated her (Jasmine). At college, teachers see Tejo coming to the staff room and address her as mad. They ask someone to throw Tejo out and say that she will embarrass them. Dipti asks teachers why they are reacting weirdly. She reminds everyone that she already told everyone that Tejo is now absolutely normal.

Tejo assures Mrs. Batra that she won’t face any problem from her side, as she is absolutely fine now. Mrs. Batra asks Tejo if she won’t beat them. This information stuns Tejo. At Sandhu house, Dilraj returns Jasmine’s watch to her. He tells Jasmine that his friends failed to speak anything after seeing her watch. Satti sends Dilraj to get ready for school. She tells Jasmine that a stranger boy (Yash), gifted her an expensive watch in first meeting, writes songs for her and showers so much love on her. Satti asks Jasmine even after receiving so much love, she feels that no one loves her. Satti reminds Jasmine that she was going to make them meet Yash and his parents.

Jasmine tells Satti that Yash has gone to Canada now. She also tells Satti that she will make her meet Yash, whenever he returns. Satti says okay and asks Jasmine to not get angry at everything. At college, Tejo asks Dipti why Mrs. Batra is saying all this and getting scared of her. Dipti tells Tejo whatever she did at college and Fateh’s football match. She also tells Tejo how Fateh fought everyone for her. Dipti further tells Tejo that Fateh took very good care of her and really loves her unconditionally. On knowing that Fateh is in the auditorium, Tejo walks towards the college auditorium.

At Sandhu house, Satti feeds food to Jasmine and tells her that she should take special care of herself at this time of her pregnancy. Jasmine rudely refuses to give Yash’s number to Satti, when the latter asks for it to talk about marriage. She rudely tells Satti that she is still not fully sure about Yash. She praises Tejo in front of Satti. Satti thinks that she can’t ever understand Jasmine and whatever goes on in her mind. Jasmine sends Satti to bring water. She thinks of using Tejo for everything. Jasmine also thinks that Fateh will also do everything to keep Tejo happy. She further thinks to use Tejo to enter Virk house.

At college, Tejo reaches the auditorium. She finds Fateh watching students rehearsing for the college function. Fateh praises students’ dance rehearsals. A female student tells Fateh that it was good but the way he and Tejo performed last time was superb. Fateh and Tejo recall their last time’s college dance rehearsals. Fateh sends students back to their classes. Tejo watches Fateh missing her as well as painting function props. She goes to Fateh and asks him to let her help him. Fateh let’s Tejo help him. He witnesses Tejo watching him in between. Tejo recalls Fateh and she doing the same thing in the past.

They complete painting the heart prop and watch each other through it. It becomes a beautiful moment between Tejo and Fateh. Fateh and Tejo discuss how they worked together last time in the Heer Ranjha play. Fateh starts speaking Ranjha’s dialogues. Even Tejo starts speaking Heer’s dialogues. They get lost in each other’s eyes. Tejo signs Fateh to hold her hands. Fateh does as Tejo says. Both Fateh and Tejo start dancing together. They recall their last rehearsal’s dance as well and perform similar steps. They again get lost in each other’s eyes. A strong air arrives and all the glitter and decorations flows towards Fateh and Tejo.

He also tells Tejo that it was a very precious time, which taught him the real meaning and new heights of love and life. Fateh further tells Tejo that this precious time also taught him that she belongs to him in all the situations. Tejo asks Fateh if he will love her even if she doesn’t remember anything. Fateh replies yes. He tells Tejo that he knows that she will soon recall their beautiful memories of the last 9 months on her own. Fateh asks Tejo to always believe in him and that his love for her can’t ever change. He caresses Tejo’s face. Electricity returns. Fateh starts leaving. Tejo recalls everyone telling her how Fateh took care of her like a child.

Fateh tells Tejo that he doesn’t want to make any decision by getting pressured by anyone/anything. He asks Tejo to take more time, if she wants to. Tejo tells Fateh that she doesn’t want to wait anymore and wants to return to her own house and live with him. Fateh and Tejo hug each other. With Tejo’s consent, Fateh will make her wear the nuptial chain (mangalsutra). Both Fateh and Tejo will get romantic and smile seeing each other.

Reviewed Rating for Udaariyaan 29th July 2022 Written Update Fatejo unite: 5/5 This rating is solely based on the opinion of the writer. You may post your own take on the show in the comment section below.