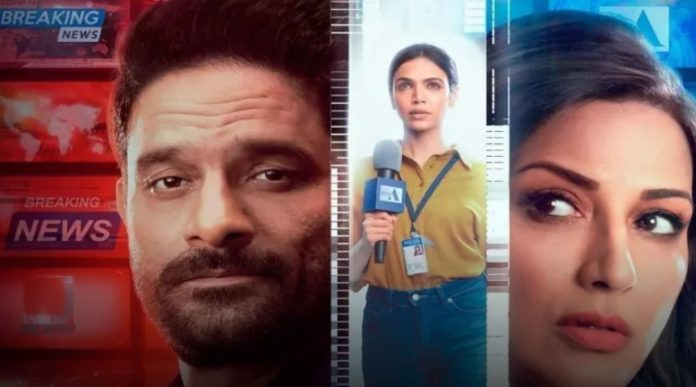 The Broken News Zee5 Episode 1 Happy Birthday This story is about rivalry between two Indian news channels “Awaaz Bharati” and “Josh 24/7” based in Mumbai. Awaaz Bharati is owned by Amina Qureshi, while Josh 24/7 is headed by Dipankar Sanyal. All journalists including news agency owner’s love, lives, lies and struggles are narrated in this story/web series. Story starts with the voice of Awaaz Bharati’s journalist Radha Bhargava. She is seen explaining to the media that allegations put on her of being a traitor are false. Radha confidently tells the media that she is a true patriot and is ready to fight even one’s own government for the sake of the country.

By showing images of two women, Radha tells the Media that her voice is everyone’s voice, which can’t be suppressed. She says questions raised on “Operation Umbrella” must be answered. After this, the Media records police arresting Radha. Radha leaves saying that her voice can’t be suppressed even being behind bars. Suddenly, the story goes back 3 months. Radha’s mother calls her and wishes her a happy birthday. She is seen worried about Radha due to some past incident. Radha doesn’t talk to her mother much. She receives a flower bouquet from someone with the initial “J”. Radha keeps it aside and leaves for her office. After reaching near her office, Radha sees Dipankar Sanyal getting down from his car and walking towards his office building.

Dipankar watches Gulnaaz Khan’s video till he reaches his office. While in the lift, Dipankar tells the guard that he is watching an adult video of their soon-to-be Youth affairs minister. Guard feels uncomfortable. After reaching his work floor, Dipankar meets his secretary, who starts telling him about his full day work schedule. While talking to his secretary, Dipankar recalls that he forgot about Aahana’s state swimming championship. Secretary reminds Dipankar that she set a reminder for him on his desk. She also reminds Dipankar that Aahana’s state swimming championship was yesterday. Dipankar receives Arunima’s sent mutual divorce petition. He gets disappointed seeing this. Radha’s colleague Kamal, wishes her Happy Birthday. In this conversation, it is revealed that Radha was actually born on 2nd October, but only few people know about it.

Both news channels “Awaaz Bharati” and “Josh 24/7” discuss CBSE topper Shravan Kumar’s death news case in their respective office’s conference rooms. Awaaz Bharati channel’s employees decide to explore and use trigger points like peer pressure, social isolation, after effects of lockdown on vulnerable youth in their news story. On the other hand, Dipankar restricts his employees from thinking about Trigger points. He asks his employees to focus on the news that can give them views. Dipankar asks his employees to bring emotional bytes of gay Shravan’s parents and boyfriends. On the other hand, Amina agrees to broadcast Shravan’s news after hearing valid points about it from her employees.

Dipankar’s employee promises to bring Shravan’s reluctant parents emotional bytes for their news channel. At Awaaz Bharati’s conference room, Gulnaaz Khan’s topic/news is discussed next. Due to her work ethics, Amina refuses to broadcast Gulnaaz Khan’s news of her old adult video in Awaaz Bharati. While on the other hand, hungry for views, money and trp, Dipankar shows much interest in Gulnaaz Khan’s adult video news to gain high trp and viewership. Dipankar even meets Gulnaaz Khan and troubles her. Gulnaaz initially requests Dipankar to npt broadcast her adult video as she is soon to be Youth Affairs Minister and is an MLA presently. But when Dipankar shows attitude to Gulnaaz, she threatens to file a privacy invasion case on him.

Dipankar laughs and tells Gulnaaz that he calls her privacy invasion as patriotism. Gulnaaz leaves, rejecting Dipankar’s offer of doing a live interview with him. Angry Dipankar asks Praful (Josh 24/7 employee) to get more adult and wrong videos of Gulnaaz. Praful leaves saying it will be done. Gulnaaz thinks of calling the “Awaaz Bharati” news channel. On the other hand, Radha scolds one of her juniors for not completing old work given to her. Later Radha watches footage of City Glitz Mall’s fire incident once again. Through her junior, Radha finds out that Josh 24/7 has complete and exclusive footage of the City Glitz Mall fire incident.

Anuj (Josh 24/7 employee) on the other hand has been sent to Shravan Kumar’s house but he shows reluctance in getting Shravan’s family’s emotional bytes for Josh 24/7’s TRP’s. Praful being Anuj’s senior sends Anuj to Ahmed Bilakia’s house in Juhu. He tells Anuj that the Prime-time story has changed and asks him to give his reference at Ahmed Bilakia’s house. Later Radha meets Dipankar and asks for exclusive footage of City Glitz Mall’s fire incident. As Dipankar shows reluctance, Radha reminds him that he is a true journalist, who started his career from Awaaz Bharati.

Dipankar makes Radha beg or request for mall’s exclusive footage. Radha feels angry, when Dipankar makes her meet the reality. He leaves explaining to Radha that no one gets anything for free after college life. Dipankar immediately asks Praful to check out what he missed in City Glitz Mall’s fire incident’s footage. He also asks Praful to send him a copy of the footage. Dipankar asks for Gulnaaz’s MMS from Praful on an urgent basis. At Awaaz Bharati news channel, Gulnaaz is seen ready to interview with them.

Praful sends a video of Gulnaaz to Dipankar, which can work for them perfectly. At the same time, Gulnaaz receives a notification. After this Awaaz Bharati finds out that Gulnaaz ditched them at the last moment. Awaaz Bharati thinks of broadcasting Shravan Kumar’s story. Radha motivates Amina to go with Gulnaaz’s story only, saying that this story is necessary for every woman. Amina gives Radha a go ahead for this. Scared Gulnaaz Khan is seen sitting with Dipankar at Josh 24/7’s news studio. Dipankar increases Gulnaaz’s fear by asking her what she will do to make people forget her adult MMS video and remember her.

Both Josh 24/7 and Awaaz Bharati go live with broadcasting Gulnaaz Khan’s MMS news story at the same time. While Awaaz Bharati uses Gulnaaz’s spread MMS news to make people realize that no one else but a person himself/herself have rights on their own bodies. She also explains to the Public that their personal moments are their personal property. Amina further tells the public that a person starts feeling ashamed, when their private moments are disclosed in public. She says that they should investigate the person who spread Gulnaaz’s personal adult video, not Gulnaaz. Amina asks people to think about it as if a strong person like Gulnaaz Khan can be made embarrassed like this, what will happen to ordinary people like them.

On the other hand, Dipankar cleverly makes Gulnaaz apologize to the public for making an adult video of her, even though she was just 18 and immature at that time. He also makes Gulnaaz say that she won’t stand for Youth Affairs Minister’s post in the election in this term. Gulnaaz helplessly does everything according to Dipankar on live news, to save her image. Dipankar smirks and leaves telling Gulnaaz that he will give her special focus on Josh 24/7 in the next elections. Amina later tells Radha that Gulnaaz called and said that she left helplessly from the office as Dipankar blackmailed her with another video of her having drugs, which they got through Ahmed Bilakia. They leave the office hoping to get good Trp results, the next morning.

At a bar, Kamal gifts a stole to Radha and leaves with his boyfriend. Later Anuj meets Radha at the bar. It is revealed that Anuj got rejected at Awaaz Bharati due to budget constraints. Radha and Anuj tell each other that Shravan Kumar’s story got sidelined at their respective channels, even when it was discussed to be shown at prime time. Anuj tells Radha that it was his first prime time news story. He indirectly shares with Radha that he felt bad while pushing up Shravan’s parents to give him emotional bytes.

On knowing that it’s Radha’s birthday, Anuj wishes her and drinks a glass of alcohol with her. On the other hand, owner of Josh 24/7 scolds Dipankar for showing porn and gay news at prime time of his news channel. Dipankar tries to defend himself but the owner of Josh 24/7 shuts him. Owner asks Dipankar to leave his car and run his channel as per his posh and classy taste. While riding in the auto, Radha and Anuj discuss their work experience. Radha takes Anuj to her home. They have some romantic and intimate moments together. Anuj spoils Radha’s mood by asking about her roommate.

Radha reveals to Anuj that her flatmate journalist Julia Alvares died, while covering the City Glitz Mall fire incident. Anuj understands that Radha is trying to investigate who murdered Julia, as according to her Julia’s death wasn’t an accident. When drunk Radha’s intimacy desire grows, Anuj tries stopping her, telling her that she is emotionally vulnerable at present. He tells Radha that they shouldn’t go ahead with what they were doing. Radha gets angry and makes Anuj leave her house. She feels very upset. On the other hand, Dipankar and Arunima decide to have a family meeting and discuss divorce proceedings, the next day at 10:30 PM.

A woman enters Dipankar’s house and walks to his bedroom with him. Radha misses Julia and caresses her photograph. Dipankar mails City Glitz Mall’s fire incident’s footage to Radha, after thinking about it a little. On receiving the mall’s footage, Radha starts checking Julia’s video from it. She gets a time and date clue from it, 17/10/21 8:37 PM. Radha checks notes of the same time and date in Julia’s diary. She also checks that Julia’s laptop got restored to factory settings on the same date and same time. Radha feels that something is fishy in all this. At the end of the episode, “Operation Umbrella” symbol/sign is seen attached to Julia’s notes board, hanging at home.