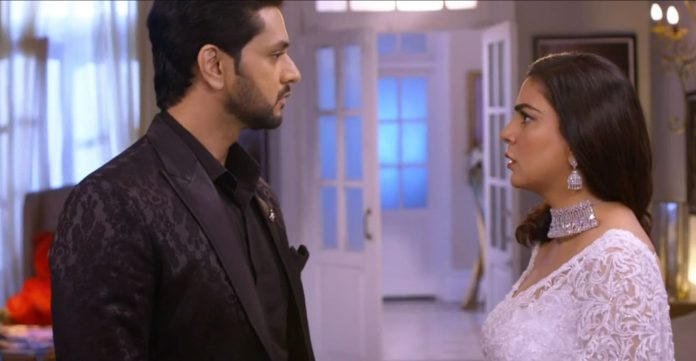 Kundali Bhagya 3rd August 2022 Written Update Party twist Preeta is habitual to care for anyone who is hurt. She does the aid to Arjun’s hand. Karan tells her that she has hurt him intentionally. He blames her, and asks her to excuse him, he doesn’t need the aid. She doesn’t listen to him, and goes on to take care of him. Karan recalls the times when Preeta did the aid to his hand. Preeta gets upset seeing him behaving like Karan. Karan plans to bring a big twist in the party, that ruins Rishabh and Preeta’s amazing day. He wants them to always remember their anniversary as a bad memory. He calls up Anjali to make an entry with their plans ready to roll. What is Karan planning against Rishabh and Preeta? Will he ever learn the truth? Keep reading.

Earlier in the show, Karan angrily crushes the glass by his hands. Rishabh asks Preeta not to get angry seeing Arjun. Preeta tells that she is okay, she isn’t angry. She wants to go and get her phone from the bedroom. Rishabh asks Preeta to inform Arjun about the media waiting for him. Preeta goes back to her room to pick her phone. She finds Arjun’s hand hurt by the glass pieces. She asks him how did he get hurt. He answers with a taunt that he won’t blame her. She rushes to get the first aid kit and take care of his wound. He tells that he isn’t too hurt that he needs the care. She still does the aid. Karan slips into their old memories.

Karan and Preeta have a moment. He stares at her, and turns away when she looks at him. She asks him to say thanks at least, when he doesn’t have a habit to say sorry. He reminds that he has saved her and also her husband’s life, he has saved lives, she should be thankful. He tells that she has kept the broken glass to hurt him. She tells that the accident was his own mistake, its wrong to blame her. He tells that he made a big mistake by coming in the party, she is a bad host. She replies that she just did the aid to his wound. He reminds that she is a doctor, she has just done her duty, she didn’t do any favor. He asks her to go to her husband, who might feel that she takes care of Arjun more than him. He irritates her.

Preeta wants to keep her calm. Rakhi tells Mahesh that she had some work in the kitchen. Mahesh tells that the chefs are already there. She tells that she makes the best sweets. Mahesh agrees with her. He tells that he also wants to have the sweets. They find Arjun hurt and ask him what happened. Karan tells that he was feeling jealous and a glass broke. Rakhi asks him what does he mean to say. Karan lies to her about the wound. Mahesh tells that they will go to the doctor. He asks Karan to see Rakhi’s tension. He makes Karan laugh. Karan tells that he is on Rakhi’s side, because all the moms are caring, moms are always right. Rakhi gets emotional. She asks Karan to come with her, she will make haldi milk for him.

The goons enter Arjun’s house to steal the cash. Anjali gets ready. She tells Dadi that she is leaving, Arjun would be waiting for her. The goons follow Anjali to reach Arjun. Sameer tells Rishabh that he loves Shrishti a lot, he isn’t cheating her. He asks Rishabh to trust him. Rishabh tells that he trusts him, they respect women in the family. Preeta meets Rishabh and tells that Arjun’s hand was got, she did the aid, he is okay now. She asks him if he felt bad. Rishabh tells that they know their relation and their limits, he trusts her a lot, he respects her much. She gets glad. He tells that he can never doubt her.

The goons follow Anjali’s car. Karan asks Rakhi if she wants to feed him the dinner and send him off. She tells that she wants to give him something special. She shows the sweets she made for him. He tells that its his favorite. He eats the sweets, and cries emotionally. He tells Rakhi that it’s the best. Rakhi tells that she knew it, he will like it, it was her Karan’s favorite also. Mahesh also comes to have sweets. Karan takes the jar. Mahesh asks for one laddoo. He takes few laddoos. Karan tells that its for him. Rakhi tells that she will make the sweets for him later. Shrishti asks them to come out for the dance performance and cake cutting. Karan thinks to hide the sweets jar.

He waits for Anjali. He goes to see. Anjali enters the Luthra house. Raja asks Vishnu to call more goons there, they will torture Arjun a lot. Karan meets Kavya. He gets to see Kavya wearing the diamond necklace which he gifted to Preeta, and suggested that their daughter can wear it too. Kavya acts naughty. Bani asks Karan how is he. Karan tells that he is feeling strange. He tells her that he is okay, Kavya is a lovely kid, she was wearing a good necklace. Bani tells that Kavya’s dad bought it for her. He thinks Rishabh has snatched everything. She thinks to not tell him that Rishabh gave his name to Karan’s daughter. She gets emotional thinking of Karan.

Reviewed Rating for Kundali Bhagya 3rd August 2022 Written Update Party twist: 5/5 This rating is solely based on the opinion of the writer. You may post your own take on the show in the comment section below.