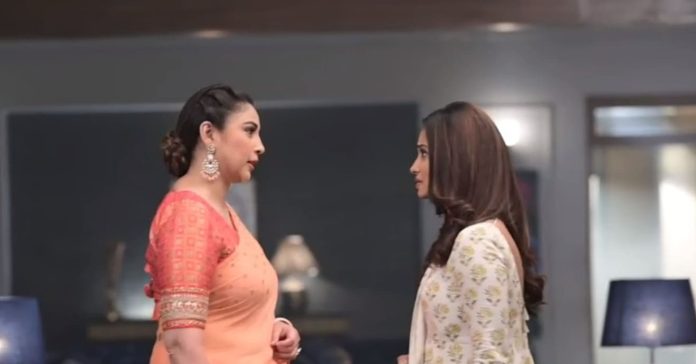 Kumkum Bhagya Pallavi secret 5th August 2022 Kumkum Bhagya episode spoiler – Pallavi’s selfish motive Pallavi informs Rhea that after Prachi gives birth to the baby she will kick her out of the house. Rhea is surprised. She says that right now she is only bothered about her happiness and it is involved in Ranbir’s first child.

Dev warns Neel and Kaju to not utter a single word. He says that teenagers are better than them as they know what they want to do in life. Dev says that Kaju loves Dev but doesn’t tell him while Neel does everything for Kaju but doesn’t understand that he too loves Kaju. Both are stunned and look at each other.

Ginni is cleaning her dhaba and doesn’t notice she is showering water on Aditya with her pipe. He asks her to stop the pipe. Aditya calls her mad and she asks him why did he come here. He says that he came to give her the cheque. Ginni says that she doesn’t want any donation but her rightful pay. She asks him to leave after getting the payment. Ginni slips and Aditya catches her.

Gunjan steps on Emily’s pallu and it falls down. Jaybala sees Emily and asks Anandibaa if she brought a foreigner daughter-in-law. Anandibaa is embarrassed. Jaybala says that now its her turn to decide if she loves Gondal or Aarav. She gives scissors to her. Anandibaa becomes emotional while Emily is stunned.

Woh To Hai Albelaa episode spoiler – Anjali VS Sayuri:
Anjali tells Indrani that she has taken Sayuri’s place while she has taken hers. She assures her that she will break Kanha and Sayuri’s marriage in a few seconds. Everyone is shocked. Kanha determines to not stop trying. Rashmi warns Anjali and she holds her hand. Sayuri stops Anjali.

Devraj declares that Yuvan and Banni will get married here today only in front of everyone. Banni’s aunty and uncle become very happy. Banni tells Vishnu that Yuvan will support her in any situation and will never leave her. Yuvan tells Devraj that he cannot marry Banni ever. Devraj is shocked.

Abhay tells Bindiya that he was fooling her. She asks him why did he do that. He tells her that she is asking this. Abhay says that he has never seen a stubborn and shameless girl like her. Bindiya is shocked. He says that when she has come with a tiffin that time only he had told her that he doesn’t wish to marry her. Bindiya is shattered.