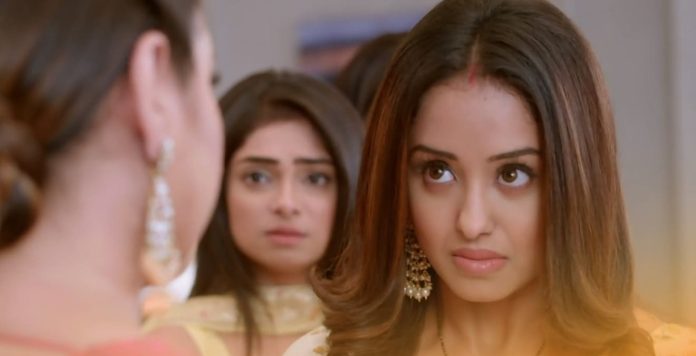 Kumkum Bhagya 6th August 2022 Written Update Rhea exits Rhea raises a hand on Shahana. She asks how dare Shahana interrupt, and slaps her. Prachi stops Rhea, and scolds her for her madness. Dida asks Rhea how can she raise hand on Shahana. She asks how would she feel if someone slaps her. She goes to slap Rhea. Rhea pushes Dida away in anger. Vikram asks Rhea to watch it. He finds Rhea crossing her limits. He asks Rhea how dare she push his mother. Ranbir and Vikram hold Dida. Pallavi tells that Rhea has crossed all the limits today. She asks Rhea to cross the final limit, the house door. She shouts get out, and angers Rhea. Rhea refuses to move, but Pallavi drags her to the house and throws her out. Ranbir rejoices the exit of Rhea, unaware of his mom’s master plan against Prachi. This is going to be Pallavi and Rhea’s united plan against Prachi. Will Pallavi fool Ranbir and Prachi by plotting Rhea’s fake divorce proceedings? Keep reading.

Earlier in the show, Rhea tells Aaliya that the entire family is going against her. Aaliya grows worried that nothing is in their favor. Rhea tells that she will think of something. Dida coughs. Ranbir gets water for her. Prachi tells Dida about Shahana and Shaina’s fight.

She knows Rhea well. She doesn’t like Shahana scolding Rhea. Dida thinks to not tell them about the divorce. She is confused. She lies about a calf’s birth and goes away. Ranbir cutely talks to his baby. He tells Prachi that the baby is complaining about her. Prachi wants a baby boy. Ranbir tells that he wants her happiness, but his heart wants a little baby girl. He knows that his daughter will be just like Prachi. His charming talks makes Prachi smile.

Reviewed Rating for Kumkum Bhagya 6th August 2022 Written Update Rhea exits: 3/5 This rating is solely based on the opinion of the writer. You may post your own take on the show in the comment section below.