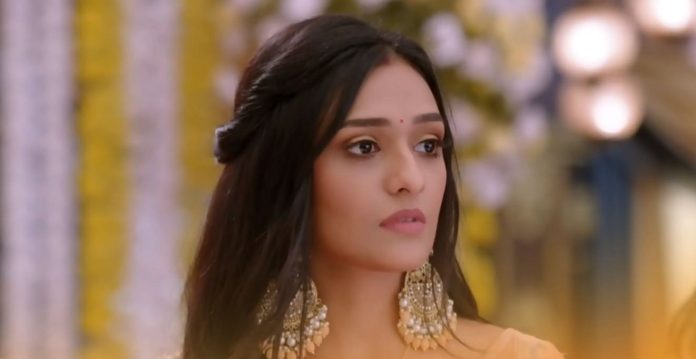 Bhagya Lakshmi 10th August 2022 Written Update Lakshmi’s fate Dadi tells everyone that Lakshmi has solely done all the preparations so she will be performing the aarti as well. Karishma gets upset on hearing this. Karishma and Neelam’s plan to insult Lakshmi fails, after the latter comes up with a backup plan. Rishi and Lakshmi perform the aarti and pray for Dada ji. Balwinder calls Lakshmi forward for the rituals. Lakshmi picks the water pot for the rituals. She receives an electric shock on holding the iron pot connected to the live wire. Durga is still around, and witnesses this. Lakshmi falls back. Rishi holds her in arms and gets worried for her. Neelam and Virender also worry sensing the danger over Lakshmi. Malishka rejoices seeing her plan work. Will Balwinder come into Durga’s sight and get caught? Keep reading.

Earlier in the show, Neelam asks Dadi not to worry, the puja won’t get spoiled. She accuses Lakshmi for adding the garlic in the halwa. Rishi asks Neelam to let it go. She asks Rishi not to say a word to defend Lakshmi. Rano defends Lakshmi. She tells that anyone else would have added the garlic in the halwa. Neelam tells that she has made the extra sweets for backup. She asks the family not to defend Lakshmi. Lakshmi tells that the puja won’t stop. Karishma gets the prasad. She thanks Neelam for saving the day. She blames Lakshmi for ruining everything. Lakshmi goes to fix the mistake. Kiran tells Malishka that they have to do a big thing, unlike Neelam and Karishma’s stupid kitchen games. Malishka tells that Balwinder can change his mind, he is scared of Durga Devi. Balwinder thinks of running away.

Lakshmi gets the other prasad she made. She tells that she used to make two sweetdishes for the prasad even in her village, just as a backup. The family gets pleased that Lakshmi has made two sweetdishes. Dadi asks her why didn’t she tell this before. Lakshmi tells that she tried to say but didn’t get a chance. Pandit calls Lakshmi a real Annapurna. Dadi tells that Neelam has also kept the sweetdish aside, just like Lakshmi did, they both are Annapurna. Lakshmi tells that she didn’t feel bad of Neelam’s words, even her mum used to scold her, Neelam also wanted her to not make mistakes. Virender tells that the puja will be done without any hurdle now. She asks pandit to keep the bhog of both the sweetdishes. The guests praise Lakshmi that she is the best bahu, the real Bhagya Lakshmi. Balwinder wants the drama to end soon.

The family sits for the puja. Pandit asks them to get up for the aarti. He asks Dadi to come forward. Dadi refuses. She gives the respect and rights to Lakshmi. Lakshmi tells that Neelam and Virender are elder, they should perform the aarti. Dadi agrees to her. Neelam thinks she won’t let Lakshmi act great. She asks Lakshmi to perform the aarti, she doesn’t care if anyone else does the aarti for the family. Lakshmi and Rishi perform the aarti together on Dadi’s saying. Lakshmi prays for Rishi’s safety. She believes that the family is of her. She wants all of them to stay happy.

Rishi wishes Lakshmi’s every wish gets fulfilled. Kiran wants Lakshmi to get out of Malishka’s path. Malishka prays for her happiness, that she marries Rishi. Neelam wants to oust Lakshmi. She prays for the family. Pandit asks them to have prasad. Balwinder thinks of his task. He stops Lakshmi. He lies about his dad, who was a famous pandit. He tells Lakshmi to do the Jal Abhishek rituals. Lakshmi holds the pot. Balwinder signals Malishka to switch on the power. He waits for Lakshmi to get electrocuted. Lakshmi gets an electric shock on holding the pot. She falls back.

Rishi holds her, while the family is left shocked. They grow worried for Lakshmi. Durga is puzzled. Kiran signals Balwinder to leave. Durga finds the second pandit missing. She asks the pandit about Balwinder. Pandit tells that he doesn’t know, maybe he ran away in fear. Kiran thinks Balwinder has run away and might have reached too far. Rishi tries to get Lakshmi to consciousness. Lakshmi doesn’t open her eyes. Malishka wishes that Lakshmi doesn’t open her eyes. Shalu and Bani cry for their sister.

Ayush consoles Shalu. Virender calls a doctor for Lakshmi. Rishi asks Lakshmi to open eyes for his sake. Lakshmi opens her eyes. Rishi gets relieved that she is okay. Malishka turns upset that Lakshmi got saved again. Dadi tells that Rishi and Lakshmi can’t get separated. Rishi hugs Lakshmi. Balwinder runs to some room to hide. Durga looks outside for her. He sees Durga blocking the exit. Rishi asks Lakshmi is she okay. He tells that he would have not forgiven himself if anything happened to her. Malishka’s plan brings Rishi and Lakshmi closer. Virender asks Rishi to take Lakshmi to the room and make her rest. Lakshmi refuses to go. She wants to complete the puja rituals. Ayush tells that he will check the kalash.

Lakshmi asks him not to touch it. Rishi tells that there is no electrical appliance near the kalash. Virender tells that Durga will check the kalash. Ahana asks her if Durga left. Ayush goes to call Durga. Lakshmi tells that she is okay. Bani tells that Rishi saved her. Lakshmi asks about the second pandit. Pandit tells that he doesn’t know about him. He asks them not to worry, everything will be good. Kiran asks Malishka to stop Lakshmi from seeing Balwinder. Dadi asks the servant to get another kalash. She is worried for Lakshmi, who has done a lot for them. She wants the family to understand Lakshmi’s worth. Ayush looks for Durga Devi. Balwinder drops a vase in the room. Ayush hears the sound and grows suspicious.

Reviewed Rating for Bhagya Lakshmi 10th August 2022 Written Update Lakshmi’s fate: 3/5 This rating is solely based on the opinion of the writer. You may post your own take on the show in the comment section below.