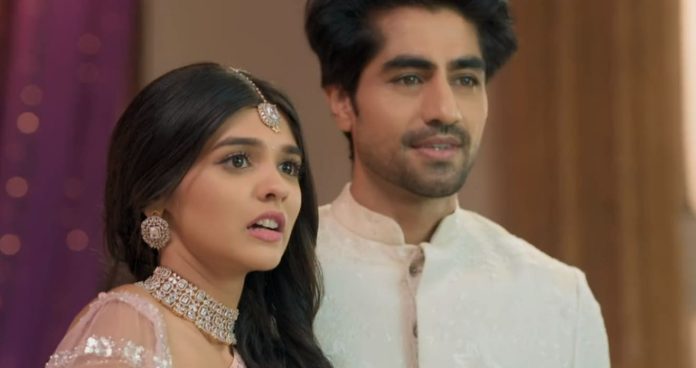 Yeh Rishta 9th August 2022 Written Update Truth for Akshara Kunal tells Birlas and Goenkas that he should leave now and will meet everyone tomorrow. Akshara runs to Dr. Kunal, and asks him if he can’t do Abhimanyu’s check-up today itself. Dr. Kunal tells Akshara that he would prefer to do Abhimanyu’s check-up the next day. He says Abhimanyu must be tired and check-up can be done with a fresh body and fresh mind. Abhimanyu tells Dr. Kunal, that it is fine, he can delay. Dr. Kunal asks Abhimanyu and Akshara to let him know tomorrow’s time.

Dr. Kunal asks Goenkas and Birlas if they don’t remember that it’s Raksha Bandhan tomorrow. Anisha says they will tie Rakhi at any time of the day tomorrow with fresh minds once Abhimanyu’s check-up gets completed. Dr. Kunal asks Birlas and Goenkas to get Rakhi celebrations done first as he is fine with waiting. Neil says he has seen people giving importance to Diwali, Dussehra, Holi but first time seeing a person giving Raksha Bandhan such importance. Dr. Kunal gets emotional and says that Diwali and Dussehra are generic festivals while Rakshabandhan celebrates the relationship of a brother and sister.

He asks Abhimanyu to let him know a time for tomorrow as he will be there. Manish tells Dr. Kunal that initially they got to know how talented he is but they got disappointed on knowing that he has stopped performing surgeries. He also tells Dr. Kunal that now some hope has risen up seeing him. He requests Dr. Kunal to not break anyone’s hope. Manjiri thanks Dr. Kunal tells him that he came to them by becoming God. Dr. Kunal asks everyone to let God’s status be with God only. He says God is never selfish but we people become selfish at the time of need. Akshara tells Dr. Kunal that for them he is equal to God. She thanks Dr. Kunal for returning to his profession for Abhimanyu’s treatment.

Abhimanyu tells Akshara that he will tie Rakhi to Dr. Kunal will give him good news the next day. Akshara laughs hearing this. Abhira gets lost. Downstairs Manjiri and Harsh praise Dr. Kunal’s personality. Harsh tells Manjiri that Dr. Kunal asked him to think about fees later on when he asked him about his fees. He says doctors of Dr. Kunal’s level doesn’t even talk without taking full advance fees. All this stuns Manjiri. Harsh says Dr. Kunal told him that money isn’t everything. Manjiri says Dr. Kunal agreed because of Akshara. Harsh asks Manjiri to make sure that Abhimanyu reaches the hospital on time tomorrow.

Manjiri tells Harsh that she won’t need to do all this as Akshara will herself wake up early in the morning, get ready herself and also get Abhimanyu ready. Harsh says as soon as check-up will be done, surgery will get planned soon then. He tells Manjiri that Abhimanyu doesn’t show up but is very tense from inside. Harsh and Manjiri decide to fast for 108 Tuesdays, once Abhimanyu’s hand gets fine. Manjiri gets stunned hearing Harsh. Akshara on the other hand, comes in front of Anisha. Akshara recalls seeing Anisha meeting a mysterious person and blaming her for doubting her. Anisha requests Akshara to pray to God to get Abhimanyu’s hand fine once again.

She says this will be her best Rakhi gift. Anisha tells Akshara that she is going outside with Manjiri to buy Rakhi’s. She asks Akshara if she wants anything. Akshara signs in and Anisha leaves. Akshara feels confused with Anisha’s behavior. At night, Abhimanyu gets worried and starts thinking negatively. Akshara tries to calm Abhimanyu and asks him to think positive. She caresses a scared Abhimanyu to make him fall asleep. Next morning, Abhira reaches Birla hospital in hope. Dr. Kunal thinks that it must be life’s plan that made him re-enter the medical field and hospital for a patient.

Akshara sends Abhimanyu inside to Dr. Kunal asking him to bring good news as she is waiting for him outside. Abhimanyu goes inside and meets Dr. Kunal. Dr. Kunal starts examining Abhimanyu’s injured hand’s nerves. Akshara stands with fingers crossed. She prays to God to make Abhimanyu’s hand fine. Akshara tells God that she can leave anything dearest to her to get Abhimanyu his dearest thing (Abhimanyu’s hand) back. Anand tells Harsh that Abhimanyu has arrived at the hospital and he (Anand) has an immediate surgery to perform. He asks Harsh even if he has to leave for a meeting. Harsh tells Anand that he will not be able to properly concentrate on the meeting as he is very tense about Abhimanyu’s injured hand’s results to be given by Dr. Kunal Khera.

Dr. Kunal further asks Abhimanyu to just be happy in upcoming days and he will do his work. He tells Abhimanyu that he will perform his surgery after 4 days from today. This makes all Birlas happy. Manjiri gives the good news about Abhimanyu’s hand surgery to all Birlas and Goenkas. She tells everyone that Abhimanyu’s hand will get better again. Everyone gets happy hearing this out. Anisha tells Suhasini that it will be her best Rakhi gift. Aarohi suspects Anisha’s changed and sweet behavior. A parcel of Anisha’s lehenga arrives. Anisha says she got a designer lehenga made by her designer friend.

Anisha gets someone’s call. She wonders why he (mysterious person) is calling again and again. Anisha hopes that the mysterious person is okay. On the other hand, Abhira gets excited, hopeful and happy with such positive news. Akshara and Abhimanyu cut a mini cupcake with a surgical knife. They make each other eat sweets in happiness. Abhira hugs each other in happiness. Anisha keeps on getting the mysterious person’s call. Anisha opens her lehenga. Everyone including Anisha gets shocked seeing a sleeveless and deep blouse.

Suhasini scolds Anisha for thinking about wearing a sleeveless and deep blouse in her wedding. Anisha tells Suhasini that it’s some mistake as she didn’t order a sleeveless and deep blouse lehenga. Suhasini doesn’t pay heed to Anisha and keeps on scolding her. Anisha asks Suhasini if she has ever seen her wearing such clothes. Mahima supports Anisha and asks Suhasini to let her sort out this confusion. Suhasini scolds Mahima for being unaware about her daughter’s each and everything. Swarna tries to calm an angry Suhasini. Suhasini refuses to believe Anisha.

At the hospital, Abhimanyu returns to the cabin to pick up his phone. Akshara hears a man lying to a girl named Anisha on a voice note, that he has got cuts and is injured. This man also tells Anisha that he has arrived at Birla hospital for treatment. Akshara gets suspicious.

In the next episode, a disappointed Abhimanyu will be seen asking Goenkas to take some time and re-think about their decision. This will shock Goenkas. Later, Akshara will witness Anisha talking to someone on video call and addressing the person on the other side of the call as “baby”. She will get shocked when Anisha will say, “I love you” to the person she addressed as a baby. Akshara will get shell-shocked when Anisha will tell this person that she will meet him after getting married.

Reviewed Rating for Yeh Rishta 9th August 2022 Written Update Truth for Akshara: 3/5 This rating is solely based on the opinion of the writer. You may post your own take on the show in the comment section below.