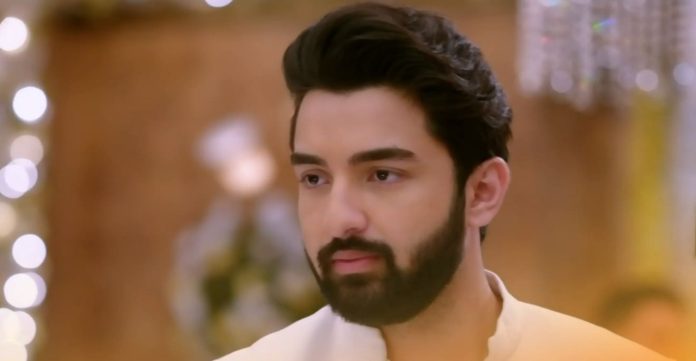 Bhagya Lakshmi 11th August 2022 Written Update Risky trap Rishi and Lakshmi perform the aarti and pray for Dada ji. Balwinder calls Lakshmi forward for the rituals. Lakshmi picks the water pot for the rituals. She receives an electric shock on holding the iron pot connected to the live wire. Durga is still around, and witnesses this. Lakshmi falls back. Rishi holds her in arms and gets worried for her. Neelam and Virender also worry sensing the danger over Lakshmi. Malishka rejoices seeing her plan work. Balwinder gets trapped in the house with nowhere to go. He can’t find a way to escape. Malishka tries reaching him and helping him escape. Will Balwinder come into Durga’s sight and get caught? Keep reading.

Earlier in the show, Virender asks Rishi to take Lakshmi to the room and make her rest. Lakshmi refuses to go. She wants to complete the puja rituals. Ayush tells that he will check the kalash. Lakshmi asks him not to touch it. Rishi tells that there is no electrical appliance near the kalash. Virender tells that Durga will check the kalash. Ahana asks her if Durga left. Ayush goes to call Durga. Lakshmi tells that she is okay. Bani tells that Rishi saved her. Lakshmi asks about the second pandit. Pandit tells that he doesn’t know about him. He asks them not to worry, everything will be good. Kiran asks Malishka to stop Lakshmi from seeing Balwinder. Dadi asks the servant to get another kalash. She is worried for Lakshmi, who has done a lot for them. She wants the family to understand Lakshmi’s worth. Ayush looks for Durga Devi. Balwinder drops a vase in the room. Ayush hears the sound and grows suspicious.

Ayush wonders what fell down in the guest room, when everyone is in the hall. Durga tells that she has come to find the pandit, who disappeared after the puja. Balwinder gets scared. He wants Durga to just leave. He looks down. He thinks why is she after him. His fake beard falls down. He gets stuck on some lamp. Balwinder gets worried. He tells that Lakshmi has cursed him. Ayush tells that the pandit would be inside the house. Durga goes to check. Virender tells that anything could have happened to Lakshmi, Rishi has handled Lakshmi, else she could have got much hurt. Dadi tells that Rishi and Lakshmi are each other’s protectors, they aren’t able to understand this. Rishi stares at the kalash. Kiran grows worried.

Karishma asks him to relax. He thinks who has planned such a thing against Lakshmi, who wants to kill her. Virender and Neelam tell that nobody can dare to come in their house. Rishi tells that Balwinder and the hidden enemy are doing this, Balwinder might have come home to harm Lakshmi. He asks them to see the result of their hidden enemy. Sonia tells that Balwinder didn’t come home, they didn’t see him. Rishi doesn’t know how Balwinder had come home. He wants to know if it was a conspiracy. Balwinder wishes that they don’t get his fake beard.

Ayush gets the fake beard. He realizes that the pandit was a fraud, some attacker in disguise. Balwinder is shocked to see his fake beard in Ayush’s hands. He runs to hide. Ayush goes to find the pandit. Lakshmi is glad that Neelam didn’t do the Jal abhishek and she is fine. She goes to complete the puja for Dadi’s sake. Balwinder hides when Lakshmi enters the room. He thinks Lakshmi has turned into a ghost after she died. He gets scared of her. He runs to apologize to Lakshmi. Pandit tells Dadi that he doesn’t know if he should give importance to the Jal abhishek or not, because its not done in this particular puja. Rishi tells that maybe the fake pandit had plotted this.

Ayush reaches there. He doesn’t see Lakshmi. He thinks to go to guest room and talk to her. He doesn’t see Malishka. Virender asks about Durga. Ayush tells that Durga is talking to the staff, she will just come. He goes upstairs. Pandit apologizes to them that he didn’t stop the rituals in time. Rishi asks if the fake pandit was Balwinder. Balwinder tells that he got greedy for money. He asks Lakshmi to take revenge on Malishka. He sees Malishka in front. Malishka slaps him for naming her. He tells that he had seen Lakshmi’s ghost. She tells that Lakshmi is alive, she didn’t die, because he didn’t give her a strong shock. She asks him to get more scared of Lakshmi. He tells that even Durga is after him.

Balwinder and Malishka hide from Lakshmi. Lakshmi suspects someone. Ayush collides with Malishka. She asks him to be careful when he walks. He asks her if she is coming from the guest room. She asks why does he want to know. He asks her not to answer if she wants. He sends her downstairs. Ayush meets Lakshmi and tells her that he got to know who planned the attack on her. He tells that Malishka had planned the attack, she is her only enemy. Lakshmi is shocked to know this. Rishi tells that someone planned to kill Lakshmi. Neelam asks him not to get involved. Rishi tells that Lakshmi could have died.

She thinks Ayush has understood everything, he isn’t foolish as he appears. She follows Ayush to stop him. Rishi swears that he won’t leave the culprit. Neelam asks him not to get upset. Virender tells that the law will handle the matter. Dadi asks Rishi to be with Lakshmi and protect her. Neelam suggests that they do the puja. Dadi tells that Lakshmi will complete the puja. Balwinder doesn’t find a way to escape. Ayush and Lakshmi enter the room and look for Balwinder. Malishka reaches them to cover up. Ayush knew that Malishka will follow them.

Reviewed Rating for Bhagya Lakshmi 11th August 2022 Written Update Risky trap: 3/5 This rating is solely based on the opinion of the writer. You may post your own take on the show in the comment section below.