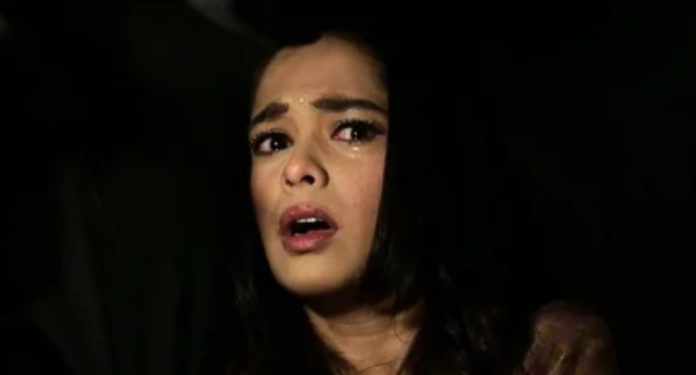 Kumkum Bhagya 26th August 2022 Written Update Hexed Prachi Aaliya tells Rhea that their work is done, but still they have a lot to do. She asks Rhea to make sure that Ranbir never gets back to Prachi. The kidnapper tells Prachi that he would be selling all of them, many girls get kidnapped, but not all of them get sold, just the beautiful girls get sold. He tells her that she is the best looking one from all of them. He asks her to smile and takes a picture of her. He tells that he is going to sell her. Prachi is shell shocked.

She doesn’t know how to get rid of the kidnappers and go free. She regrets of leaving the house in anger, but still doesn’t expect Ranbir to learn about her disappearance and save her. Prachi expects Shahana to reach her by finding clues of her kidnapping. Shahana really gets to see Prachi’s bracelet and finds out that Prachi is kidnapped. She gets worried for Prachi, and runs to inform Ranbir about the big trouble. Will Ranbir get to senses on knowing about Prachi’s kidnapping and save her life? How will Prachi save herself and protect her baby? Keep reading.

Pallavi tells that its not just Sid’s mistake, but also of Prachi. Dida asks her to stop it. Rhea tells that its Prachi’s mistake to entertain and encourage Sid on knowing that he likes her. Sid asks them not to blame Prachi, she isn’t at fault. Aaliya asks him if he wants to say that he loves Prachi. Vikram asks them to stop the discussion on this topic. He asks Sid to go to his room and rest. Dida asks Vikram to oust Sid. Vikram tells that they will talk to Sid later. He asks her not to repeat the old mistake. Dida blames her upbringing. Prachi finds some more girls kidnapped. She asks them who are they. The girls tell her that they all are kidnapped, the goons want to sell them. Prachi is shocked to realize the huge trouble.

Prachi is shocked to know about the human traffickers. She asks how can someone sell the girls. The girl tells that the kidnappers are taking them out of Delhi to sell them. Prachi cries and talks to the girls. She tells that she is married. The girl asks why did she leave from her house at night. Prachi tells that her husband Ranbir cheated her. Shahana puts water on Ranbir’s face and asks him to get up. Ranbir asks her what is she doing here. She tells that he isn’t in his bedroom that he is sleeping. He asks where is he. She tells him that Prachi got kidnapped.

Prachi refuses. The goon rebukes her. He threatens to kill her. She gets scared for her baby. He tells her that he likes her, she is the prettiest of all. He asks her to listen to them and not try to fight. She threatens him about her husband. He laughs that she is trying to scare him. He tells that he doesn’t listen to anyone. Prachi tells that he is doing a crime, which he shouldn’t do. He clicks her picture. He puts a tape on her mouth.

The man apologizes to Soumya for playing her lover and cheating her. He tells her that she will get a better lover than him. On the other hand, Aaliya and Rhea celebrate their victory. Aaliya tells that she deserves some credit. Rhea praises her idea that saved them. She tells that Aaliya saved her, and she is thankful. She tells that they will ask Sid to leave and also let his sister free, because they can’t pay the goons for long. Aaliya asks her to think big, and not leave Sid and his sister so soon, else Sid can tell the truth out of his guilt. Aaliya tells that they should be careful. Shahana asks Ranbir how much he loves Prachi. He tells that he loves her a lot. She doesn’t know which way to go and find the van. She asks him to feel which way Prachi might have gone. Ranbir tells that he can hear something. He gets down the cr. She thinks Ranbir has felt Prachi. Ranbir tells that someone is there. He asks a beggar about Prachi.

Shahana tells that a girl got kidnapped, if he had seen the van. Ranbir shows Prachi’s picture and asks about her. The man tells that she is Lakshmi. Ranbir tells that she is of him. Shahana tells that Prachi left Ranbir. The man jokes that Ranbir will become a beggar. He asks Ranbir to come in the morning and learn begging from him. Shahana asks Ranbir to come with her, they will find Prachi themselves. Ranbir follows his heart and guesses that the van went the left side route. Shahana takes a left turn. The goons threaten the girls and asks them not to try to escape. He asks them not to talk among themselves. The goons talk about selling the girls. Prachi asks for water. The goon refuses to help.

She tells that she is sick, she can die due to coughing. The goon gets some water for her. She picks a piece of glass to cut her ropes. She gets freed. She helps the other girls as well. She asks them to come with her. They try to find an escape route. Ranbir tells that he feels Prachi is close. Shahana tells that he broke Prachi’s heart, he didn’t trust Prachi. She blames him for always hurting Prachi. Prachi is stunned when she gets caught at gun point by the goons.

Reviewed Rating for Kumkum Bhagya 26th August 2022 Written Update Hexed Prachi: 1/5 This rating is solely based on the opinion of the writer. You may post your own take on the show in the comment section below.