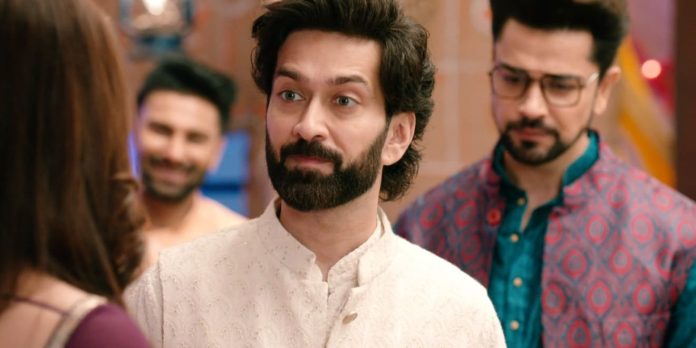 Bade Acche Lagte 30th August 2022 Update Pihu’s truth for Ram Ram thinks of apologizing to Krish for hurting his sentiments. Pihu and Krish bond. Ram joins them when Pihu announces the treasure hunt game. Pihu tells that Krish and Ram will have a competition, the one who wins the three rounds will win the competition. She just wants them to play on Kanha’s birthday. Both Krish and Ram challenge each other. They both think their will win the game. The family also wants to play. Pihu involves everybody. Vedika doesn’t want to bear the drama. Nandini wants to go and take rest in her room. Pihu asks her to stay back and cheer for her son. She asks Ram to find his Radha in the first round.

Ram looks at Priya with love. Krish understands that Ram and Priya are made for each other, and gets away from their path. He decides to unite them. He clears to Ram that he is okay if Ram wants to accept Priya back in his life. Ram plays the rounds and goes out where he finds Priya talking to Ishaan. Ishaan asks Priya why doesn’t she want Ram to know the truth that Pihu is his own daughter. Ram is moved by this truth. Ishaan asks Priya why doesn’t she want Pihu to live with his dad, Pihu is Ram’s daughter, his blood.

Ram cries happily on knowing the truth. Pihu finds Ram crying and asks him if he is upset that she is going. She tells him that hugging someone ends all the pain. She hugs him. Ram gets happier to embrace her, knowing she is his own daughter. On the other hand, Brinda confirms from the doctor that Ram and Pihu’s DNA samples have matched. She realizes that Pihu is Ram’s daughter. She rushes home to give the good news to Ram.

Reviewed Rating for Bade Acche Lagte 30th August 2022 Update Pihu’s truth for Ram: 5/5 This rating is solely based on the opinion of the writer. You may post your own take on the show in the comment section below.