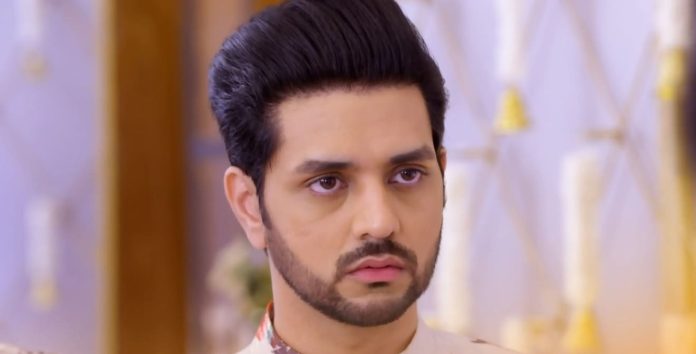 Kundali Bhagya 5th September 2022 Written Update Jealous Karan Kritika happens to see Prithvi with the fake beard. He removes his fake beard, and then gets shocked to see her around. She identifies him and calls out Prithvi. He worriedly rushes out. Kritika follows him. Rishabh sees Preeta and goes to talk to her. He stumbles down. Preeta holds Rishabh. Rishabh asks her is she okay. She tells that she is okay, but did he get hurt. He tells that he is also okay. Sameer asks Rishabh is he okay. Rishabh tells that Preeta was there to hold him, so he is absolutely okay. Karan looks at Rishabh and Preeta supporting, trusting and admiring each other so much. He feels jealous seeing their bonding and thinks they both love each other a lot. He doesn’t know that Rishabh and Preeta’s relation is only of trust and respect, not love, because of Preeta’s love commitment to Karan.

Earlier in the show, Karan cheers up Rakhi. She tells that she is smiling because of him. She hugs him. Preeta gets puzzled seeing their bonding, which reminds her of Karan even more. Rakhi likes the tea prepared by Arjun. On the other hand, Prithvi roams in the house looking for Arjun.

Kareena scolds the servants. He thinks she will never change. Kareena stops him and asks him to perform a puja. He asks he to touch his feet and get his blessings. She touches his feet. He wants to bring every Luthra member to his feet. He sees Rishabh and Mahesh. He wishes he could make everyone bow down to him. He finds Arjun coming downstairs with Rakhi and Preeta. Bani asks him to perform dance. Karan, Rishabh and Sameer perform the dance together. Preeta feels restless seeing Arjun.

Bani tells that Arjun looks so happy with them. Anjali worries. Rakhi takes Arjun with him. Sherlyn and Prithvi keep an eye on Arjun. Prithvi wants to target his prey Arjun. Kritika suspects Prithvi and goes after him. Prithvi looks for Arjun. He feels tired of the disguise, and removes the fake beard. Kritika sees him and asks him to stop. Prithvi runs away. Rakhi gets emotional and tells Arjun that she misses Karan so much seeing him, like Karan’s soul has come in Arjun, his face is different, but he is just like Karan from his heart and nature. She calls him her son. He asks her if she misses Karan a lot. She tells that she doesn’t miss him now, because he didn’t go anywhere far from her. She adds that Karan has gone away, but he is still alive in her heart.

She tells that she wants Karan in her life again, Karan was her son, he was her favorite, she loves Rishabh too, but loved Karan more. Karan gets emotional hearing her. Rakhi expresses her pain over Karan’s loss. She asks him not to tell this to Rishabh. She tells that Rishabh knows she loves Karan more. Karan tells that he wishes to stay with her forever. She asks him to stay back with her. He tells that he wishes so, but he can’t stay. He thanks her for loving Karan so much, since he is giving Karan’s share of love to him. She hugs him.

She tells that she will record this moment and watch it whenever she wants. She looks for her phone. Sameer comes to them. He finds Rakhi crying and asks is she missing Karan. She asks for her phone. Karan remembers Mahesh’s words about Rakhi’s habit of keeping the phone under her pillow. He tells that her phone would be under the pillow like always. Sameer finds the phone under the pillow. Rakhi is stunned. She asks Arjun how does he know that she forgets her phone this way. He tells that even his mom does the same thing. He asks her to come and take the picture with him. They click selfies. Karan leaves to avoid her questions. Rakhi feels Arjun is really Karan.

Karan thinks to control his emotions. He sees an old painting on the wall, and thinks it used to be in the study before. He watches Preeta from far and smiles. Sameer asks Arjun what is he thinking, does he smile also. He compliments Arjun for his smile. Preeta tells that Sameer is surprised seeing a person like Arjun smile. She asks Arjun does he smile also, he always makes a rude face. She tells that they never saw his sweet smiling face. Karan asks her how does she know about it. She tells that she has seen him smiling. Karan asks them not to make his smile a breaking news. Rishabh comes there and stumbles.

Preeta holds him. She asks him is he okay. He tells that it was slippery, he is fine because she held him. He informs Preeta about Kavya’s PTM and the annual day. Preeta asks him to come along. Karan asks her not to force Rishabh if he is busy. She asks him not to come between them. Karan asks them to continue, he will have water. Sameer goes to call Arjun to inform about the contract. Rishabh tells Preeta that he feels uncomfortable to talk to the teachers. She tells that she will handle the PTM. Rishabh thanks her. Preeta doesn’t want Arjun to comment or interfere between Rishabh and her.

They remember their moment with Karan, who asked Mahesh for his golden pen to sign a contract saying its lucky for him. Karan asks for Mahesh’s golden pen, and leaves them shocked. Mahesh gives his golden pen to Karan. Rishabh and Sameer are shocked by the series of the coincidences. Karan is still the same Karan, and talks in the same way. Karan congratulates them for the partnership. He goes to get blessings from Bappa. Sameer tells Rishabh that Arjun resembles Karan so much like he is Karan himself. Rishabh is clueless, but gives it a thought.

Reviewed Rating for Kundali Bhagya 5th September 2022 Written Update Jealous Karan: 4/5 This rating is solely based on the opinion of the writer. You may post your own take on the show in the comment section below.