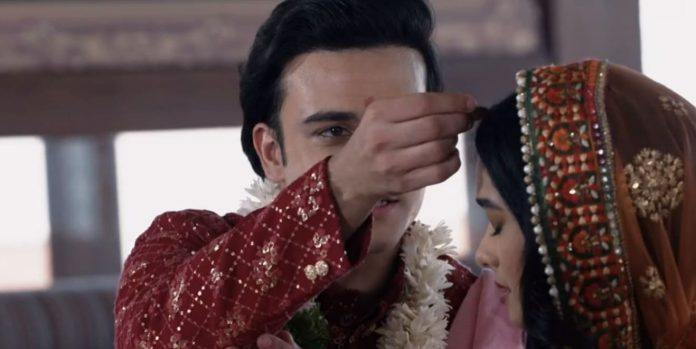 Kumkum Bhagya 8th September 2022 Written Update Bruised Pranbir Prachi refuses for her second marriage. She tells Ranbir that she can’t listen to him and marry Sid. Ranbir is in much pain to ask his wife to marry someone else. He gets angered and hurts himself. Prachi knows that Ranbir is again misled by Rhea and Sid. She is hurt that Sid lied about her and stained her character in front of Ranbir, Sid has proved her wrong. She goes to Ranbir to do the aid to his wounds. Ranbir doesn’t take his help. He pours some alcohol on his wound to heal it. He tells that he doesn’t want her to pretend care, because she is the one who gave the wounds to him. She knows his heart is bruised.

Ranbir and Prachi have a big argument. He feels helpless, because Prachi is his love. He loses faith on Prachi. He tells that its Sid’s baby and the baby deserves a life with his real parents. He asks her to marry Sid for the sake of her child. Prachi denies that its Sid’s child. She wants him to believe her once. She stops him and does the aid to his wound by scolding him. She loves him and cares for him like always. Ranbir asks her to stay away. Keep reading.

Earlier in the show, Aryan tells Prachi that Ranbir loves her a lot. Prachi tells that Ranbir’s love can’t help him. She asks Aryan to help Ranbir and do the aid to his wound. Aryan tells that just Prachi can help Ranbir. She tells that relations are weak, sometimes it cages you and it gets tough for a person to breathe in a relation. She tells that Ranbir doesn’t need her. She knows Ranbir’s heart is also bleeding like his hand. She asks Aryan to tolerate Ranbir’s anger and be patient in handling him. She tells that Ranbir doesn’t know what he is doing. Aryan tells that even doesn’t know what she is doing. Rhea asks Sid to see his sister’s face, then he will get really afraid. Sid asks them to leave Mihika. The goon tells Aaliya that there is no one outside. She slaps him. Dida knows that Aaliya is planning something. She reaches the door again to spy on Aaliya.

Aaliya slaps the goon. She asks him not to interrupt her when she is talking. She tells him that Sid is meeting his sister. She asks the goon to guard outside and go his work. Rhea asks her to focus on their goal. She also slaps the goon in anger. Dida hides from the goon. Sid tells that he has done their work. He asks Rhea to leave Mihika. Rhea tells that he is spoiling their plan now. Aaliya threatens him. Sid asks her not to harm his sister. He begs them. Rhea asks him to promise, he won’t go anything against them. He promises them. Rhea tells that she can’t trust him. Sid begs Rhea for Mihika’s life.

Rhea asks Aaliya does she think he is saying the truth. Aaliya tells that Sid is really crying in fear. She asks him to get quiet, they will leave Mihika when Sid marries Prachi. She asks him to marry Prachi soon if he wants to free his sister soon. Rhea asks Mihika not to make any noise. She asks the goons to take Mihika. Aaliya tells that she will take Mihika from the back exit. They take Mihika with them. Dida watches them. She wonders who is that girl with Aaliya and Rhea. Rhea asks Aaliya to wait. She gets suspicious. Rhea sees Dida hiding. She goes to tell Aaliya about Dida.

Vikram asks Ranbir not to take Dida’s call, she will scold them that they aren’t attending the guests. Aryan and Prachi get the first aid kit. Vikram asks them to do the aid to Ranbir’s hand. Prachi asks Aryan to do it, but he excuses himself. Prachi cares for Ranbir’s wound. She scolds him with love. He asks her not to show such fake concern.

He tells that he doesn’t want her fake concern. She tells him the fact that he is careless, he doesn’t see and hear normal things. She asks him to stop being careless and stupid. She holds his hand to take him. He refuses. Dida worries that Ranbir isn’t answering. She runs to save her life. Goons follow her. She locks herself in some room. Goons ask her to open the door. Dida prays for her safety. She jumps out of the window. She flees. The goons follow her. Aaliya and Rhea take Mihika. She asks Rhea to think negatively all day, but not today. Rhea asks her not to lecture her. They both get into an unwanted argument. Rhea tells that Dida has run away, if she reaches home, then they will be into a big trouble.

Aaliya tells that she will hire a servant and ask him to keep an eye on Dida. She asks Rhea not to panic. Rhea apologizes and hugs. Mihika tries to run away. Rhea runs after her to catch her. Ranbir tells Prachi that he doesn’t need any help, he is okay. She tells that she can see it. He tells that she can’t see the truth. They both pass taunts on each other. He asks her if she will leave him if he can’t tolerate. She tells that he left her. He gets tears in his eyes. He remembers the baby, who had become a big reason for their union. Ranbir hurts himself. She asks him what is he doing, why is he hurting himself.

Ranbir tells that his heart is burning, his mind, dreams, hopes and soul are also burning, he can’t see her and she can’t see him because of the smoky fog, there is just pain and they have no cure for it. She asks him not to listen to anyone. She wants to tell him the truth. He tells that he is angered that he wasn’t with her when he should have been, but Sid was with her. He promised her baby that he will give the baby his parents. He wants to keep his promise. He asks her to let him listen to his parents, because he always got hurt whenever he went against them. He wants to obey them. She asks him if he really wants to abandon her. He tells that his love won’t end, he will always love her, love never changes or ends, he will always pray for her happiness, with Sid and their baby.

Reviewed Rating for Kumkum Bhagya 8th September 2022 Written Update Bruised Pranbir: 1/5 This rating is solely based on the opinion of the writer. You may post your own take on the show in the comment section below.