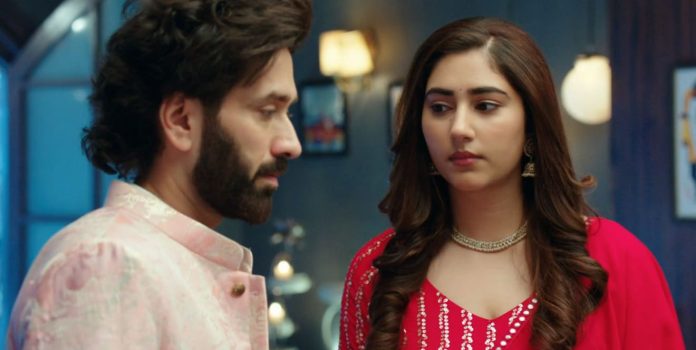 Bade Achhe Lagte 2 Spoilers 9th September 2022 Priya tells Nandini’s truth to Ram. Ram doesn’t believe Priya. He denies the truth against his mom. He tells that Nandini can never cheat him. He blindly believes Nandini and Shubham. He tells Priya that his family didn’t know Pihu’s birth truth, they can never make Priya and Pihu away from him. He tells Priya that he will prove her, because she is wrong always. He tells that she was wrong five years back and even she is wrong. She defends that she wasn’t wrong in the past and not even now in the present. Ram and Priya get against each other due to Nandini’s plotting.

Gunjan tries to inject some drugs to Aarav to make him admit the truth behind his marriage. She knows that Aarav has married Emily just to go to America, Emily is just a ticket to America for Aarav and nothing else, he doesn’t love Emily at all. She fails to record his statements. She thinks once she drugs him, he will blurt out the truth all by himself. She makes a mistake and injects the drugs to Gulab Das, who helplessly speaks just the truth. Gulab Das annoys Anandi by confessing that he has stolen the money from her drawer. Anandi chases him to break his bones. Gunjan re-attempts to drug Aarav to fulfil the goal of ousting Emily from their house. She drugs Aarav by stealing the drugs from the dentist’s clinic.

Aarav gets intoxicated. Gunjan records their conversation and asks Aarav about the reason behind his marriage. She asks him if he really loves Emily. She tells that he doesn’t hide anything from her and she expects the truth from him. Aarav tells that he has no problem in spilling his secrets. He admits the truth that he has no feelings for Emily, he just regards her a ticket to America. He tells that he has agreed to keep the marriage just to fulfill his America dreams. Gunjan gets glad and takes the confession video to Emily. She shows the confession video and asks Emily to decide if she wants to keep the loveless marriage with Aarav. Emily is in shock that Aarav lied to her and pretended to love her.