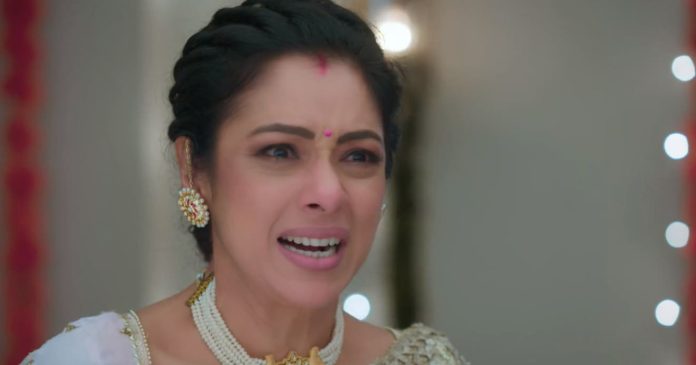 Anupama 16th September 2022 Written Update Anupama protests Anupama can’t stand Paritosh’s revolting behavior. She confronts him about his affair, that he is cheating Kinjal and the other girl as well. Anupama didn’t expect that Paritosh will bring such disgrace for the family. She regrets that a wife knows her husband’s affair at last, and she feels fooled by the closest relation. She wants her son to value a relation, instead serving it with cheat. Anuj tries to console Anupama. She wants Kinjal to punish Paritosh. Anuj pacifies Anupama. Paritosh asks Kinjal not to hear Anupama’s words, Anupama doesn’t know that affairs are common in today’s times.

He tells that he is over that affair now, and he has promised Rakhi, he will never repeat his mistake. He promises that he will become a perfect husband and a perfect father. He professes his love for Kinjal. He blames Anupama for attempting to break their marriage. He tells that their love is strong. Anuj breaks his silence and criticizes Paritosh, who fell weak and cheated his wife. Kinjal doesn’t want to give another chance to Paritosh. Anupama fears that Kinjal will get heartbroken. Kinjal knows that her love and efforts didn’t fall short. She wants to know why did he cheat her. Paritosh tells that he has his own needs.

The family elders scold Paritosh for shamelessly boasting his dirty mind. Anupama wants Paritosh to admit whatever is there in his mind. She tells that his mind is dirty, and that’s disappointing. She feels sorry that she didn’t teach the right thing to her son. She takes a stand for Kinjal, who she regards as a daughter. She feels she has stayed in darkness for eight years, so she knows the pain of deceive. Kinjal asks Paritosh if she does this mistake, then will he forgive her. She tells that Anupama also asked Vanraj the same thing. Kinjal tells Paritosh that she will forgive him once she also has a timepass fling and settles scores.

He shouts on her. She tells him that many couples stay in long-distance relationships, but not everyone gets into a casual fling. Vanraj stops Paritosh from yelling at Kinjal. Kinjal tells that women can never think of such a mistake, because love means the most to women. She condemns Paritosh’s love. He tells that Anupama and Kinjal are trying to ruin everything. He asks them to forget it for once. Vanraj rebukes Paritosh.

Vanraj angrily slaps him. He asks Paritosh to die of shame. Kavya tells Paritosh that Vanraj and she have hidden their affair, knowing they are wrong. She asks Rakhi why did she cover Paritosh’s mistake instead slapping him. She tells that Rakhi couldn’t take a stand for her daughter. Rakhi tells that Kavya can never understand her emotions. Rakhi and Kavya argue. Anupama asks Kinjal what does she want. Rakhi wants Kinjal to give a chance to Paritosh. Leela also feels that men make mistakes, women should simply forget it and move on. Anupama asks if a murder is commonly done, then isn’t it tagged a crime. She doesn’t want Leela to support Paritosh. She justifies that she has told the truth to Kinjal who deserves to know it.

Reviewed Rating for Anupama 16th September 2022 Written Update Anupama protests: 3/5 This rating is solely based on the opinion of the writer. You may post your own take on the show in the comment section below.