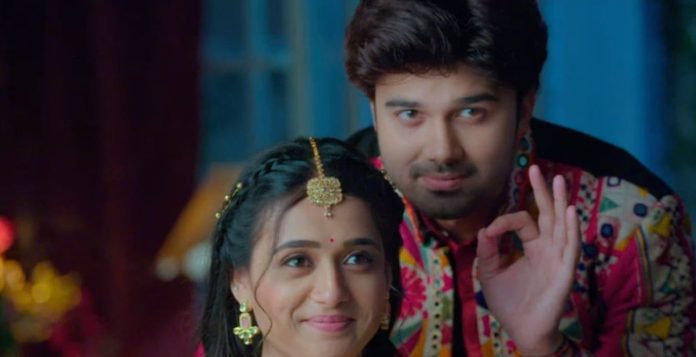 Sasural Simar Ka Swaran Ghar 26th September 2022 Aarav boasts of his good looks in front of Simar. He tells that he is sorry, but he can’t compliment her. She asks him to give her some time, until she gets decked up and comes to stun his senses. Aarav also gets speechless seeing her. She tells that she isn’t ready yet. She plans to shock him. He tells that her glimpse has stunned his senses. He lovingly adorns her. Mayakshi and Rudra order Chaya to kill Simar and carry out their evil plans. Mayakshi makes a devious conspiracy to kill Simar during the celebrations.

She tells that the entire world will be celebrating the festive, while they carry out their heinous plan. She takes a disguise to enter the function. She instructs Chaya to kill Simar. Simar and Aarav happily perform the darba. Chaya’s spirit in Reema’s body is close to Simar. She takes a hidden sharp knife to stab Simar to death. Who will save Simar from Chaya? Keep reading.

Ajit hears RJ Tanha’s show. Tanha aka Goldie tells that he is stuck at a dangerous phase of his life, he wishes that he didn’t fall in such a dilemma, his wish has become his passion now, its not in his control now. He expresses his feelings for Swaran. Ajit realizes that Arjun has deep feelings of love for Swaran. On the other hand, Swaran misses Ajit. She realizes that Ajit is a big part of her life. She values him even more. Ajit wonders what will Swaran answer him. She tells that Ajit is still her old friend, she will not lose him, because his friendship is a life support for her. Swaran makes a promise to herself that she will never lose Ajit. Ajit thinks Arjun is far better than him and can keep Swaran really happy. He wants Swaran to accept Arjun’s marriage proposal and get a life of respect back. Ajit sacrifices his life and happiness for Swaran’s better future.