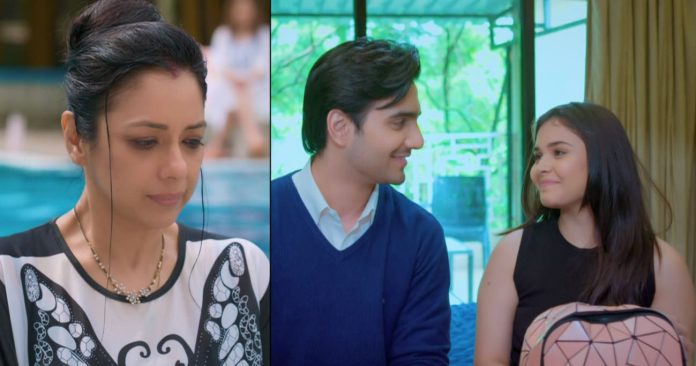 Anupama 13th October 2022 Update Pakhi Adhik resort twist Hasmukh handles the situation when Vanraj and Ankush get into a heated argument. Anuj asks them to not fight. They both tell that they have no interest in partying together. Hasmukh threatens them of exposing their childhood pictures in the family group. Anuj and Hasmukh convince Vanraj and Ankush to patch up and end the fight. Vanraj agrees to Hasmukh. He apologizes to Ankush. Anuj also makes Ankush apologize. Vanraj hugs Ankush. The family women have fun playing the pool games. The ladies send their cool pictures to the family men, who also decide to plan something and enjoy their time.

Anuj starts missing Anupama deeply. He is happy that she is enjoying. Pakhi and Adhik reach the resort. They book a room. They aren’t aware that the family members are also at the same resort. Anupama stays worried for Pakhi. She thinks to ask Vanraj to call Pakhi and check on her. Pakhi lies to Vanraj that she is with her friend. She convinces Vanraj. Adhik tells that there won’t be any problem now. He adds that its really strange for them to meet in a hotel room, but he has no problem if she isn’t comfortable. She tells that she is okay with it. She asks Adhik will there be any issue.

He tells that they aren’t underaged, there won’t be any issue. He gets romantic with her and proposes her for marriage. He tells that very soon, they will be married and stay in the same room soon. Adhik pleases her with his sweet talks. Pakhi turns shy by his approach. He asks her to freshen up. He plans to take her for an outing. Vanraj informs Anupama that Pakhi is okay. Anupama gets relieved of the worry. The family members enjoy their time at the swimming pool. Adhik tells Pakhi that he forgot their IDs at the reception. Anupama gets close to see the IDs, while talking on call at the reception. Pakhi asks Adhik to hurry and get the IDs.

Reviewed Rating for Anupama 13th October 2022 Update Pakhi Adhik resort twist: 3/5 This rating is solely based on the opinion of the writer. You may post your own take on the show in the comment section below.