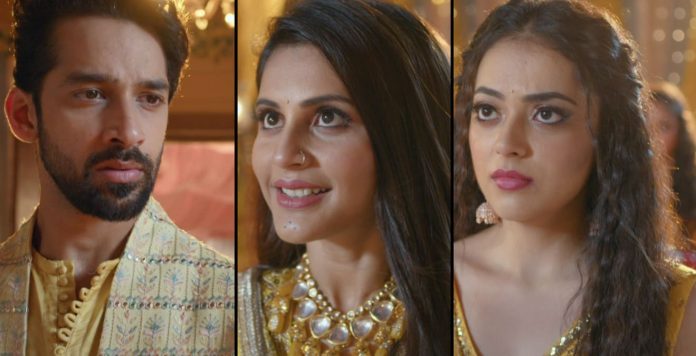 Imlie 23rd October 2022 Written Update Imlie hinders Chini Atharv goes to tell the truth to Imlie. He is stunned to hear the love confession from Imlie. She tells that she isn’t hesitant to confess it to love. Imlie’s I love you stuns Atharv. He is amazed to see her romantic surprise. He holds her hand to clarify, when Chini arrives there with Atharv’s family. Chini gets them home. The family expects an answer from Imlie and Atharv. Rudra is disappointed to see Atharv and Imlie meeting secretly. He tells that the entire family was worried for Imlie. Atharv defends Imlie. He tells that he knows the family is upset. Rudra asks them why didn’t they think of such romantic date before.

The family bursts out laughing. Chini doesn’t know how their anger dipped down in a second. Arpita thanks Atharv for taking Imlie out. Imlie gets support from the family. Rudra tells Imlie that just she has a right on Atharv now. He adds that he will make Imlie his Bahu very soon. Atharv finds difficult to deal with the situation. He feels he would be doing wrong to break everyone’s trust and Imlie’s dreams. Atharv goes to his car, and is hindered by Chini. She asks him not to be nervous when he is going to marry his true love. She tells him that she will take Imlie’s place in the mandap by putting the veil on her face, nobody from the family will know about this.

She asks him to stop. He doesn’t want to cheat Imlie. He promises that he won’t take her name in front of the family. Imlie dons the bridal ghunghat. She remembers Atharv. She tells Arpita that she got her love. Atharv wants Imlie to know the truth. He reaches Imlie, but is shocked to see Chini attempting suicide. He rushes to save Chini, who blackmails him and threatens of ending her life by committing suicide. She asks him to not tell the truth to Imlie. He asks her to step down and not harm herself. He saves Chini’s life. Chini’s emotional blackmail works. He hugs her and promises that he will do as she wants. He tells that he wants her safe. She gets glad that she secured her marriage. Imlie sits for her haldi rituals.

She gets surprised when Atharv himself gets the haldi for her. Chini plans to apply the haldi to Atharv so that his feelings and motives don’t fall weak. The lovers meet and share a haldi moment. Imlie stops Chini from applying the haldi to Atharv. She tells Chini that Atharv is her would be life partner, she won’t share his love with anyone. She tells that she isn’t so foolish to let anyone come between them. Imlie stuns Atharv. Chini plots to faint down Imlie and take her place in the mandap. Chini executes her plan.

Reviewed Rating for Imlie 23rd October 2022 Written Update Imlie hinders Chini: 2/5 This rating is solely based on the opinion of the writer. You may post your own take on the show in the comment section below.