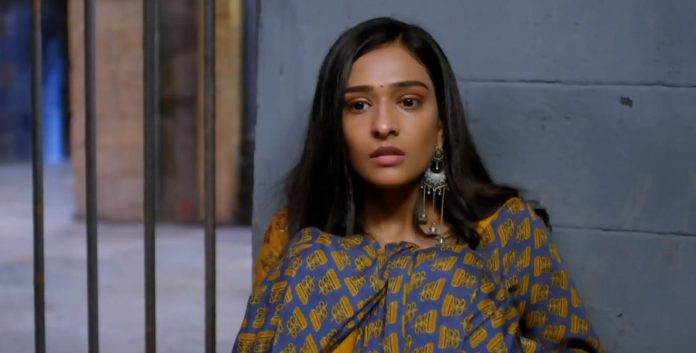 Bhagya Lakshmi 17th November 2022 Written Update Lakshmi arrest? Malishka is seated somewhere with her head cover mask on her. Dadi assures Kiran that nothing wrong will happen with Malishka, and she will not let anything wrong happen with Lakshmi. Kiran tells Neelam that they have to call the Police and apologizes. They have no other way out. Shalu comes to meet Lakshmi and asks if Police comes then? Dadi tells everyone who is against Lakshmi that if she is proved innocent then she will ask many questions from them which they all shall answer, that who got the family respect at stake. Shalu tells Bani that someone is trapping Lakshmi and doing conspiracy against her, but who? Neelam looks on. Inspector comes to Oberoi house and asks Lakshmi to come with them. They arrest and take Lakshmi from there.

Earlier in the show, Lakshmi says I really don’t know. Kiran raises her hand to slap Lakshmi. Dadi stops Kiran and tells that she is Lakshmi, Oberois’ bahu and you people are here in our house. Abhay tells that they didn’t go to Police due to their respect. Kiran says if Lakshmi doesn’t tell about Malishka, then I will not care whoever comes inbetween. Lakshmi asks her not to talk like that with Dadi. Kiran asks where is Malishka? Lakshmi tells that she can’t think of kidnapping in her dreams. She goes to her room crying. Sonia tells that she has done kidnapping. Karishma says that’s why not telling us where she had gone. Kiran tells them that she will get her daughter anyhow and will do anything.

Lakshmi recalls Ayush calling her for help. Ayush asks Lakshmi to come there fast, tells her about his accident. Lakshmi asks if he is fine? Ayush tells that he has hit a biker and tells that his mind is not working. He sends her location. Lakshmi goes to him. Ayush cries badly. Lakshmi reaches there and sees Ayush sitting on road and the biker injured and profusely bleeding with head injury. She checks his pulse. Ayush asks her to tell that he is alive? Lakshmi pacifies Ayush saying the biker is alive, we shall take him to hospital. Ayush tells that Police case shall not happen, as his family name will be ruined. He worries for Virender’s respect. He tells that nobody thinks me anything in the house. He tells that Rishi scolded him for presentation, he couldn’t make it. Lakshmi hugs him and tells that they shall first take the biker to the hospital. Lakshmi is driving the car and taking the biker with Ayush. Ayush asks her to ask the biker not to file complaint. Lakshmi asks him not to panic. Ayush asks her not to tell anyone. back to present, Lakshmi feels helpless and thinks she can’t tell anyone. She thinks she has promised Ayush and can’t tell anyone. She thinks Rishi shall trust his heart.

Kiran tells that she doesn’t trust Lakshmi. Virender tells that he completely trust her. He tells Abhay that he do understand his stress, but will never let his daughter wrongly accused. Dadi asks how can you think of this? Virender comes to know that clients have come. Abhay assures that he will handle everything. Virender tells that he will leave. Dadi is determined not to let anything wrong happen with Lakshmi. Kiran thinks it is good he has gone. She accuses Lakshmi again of kidnapping Malishka. She says we have to call the Police. Abhay tells that they were silent till now, due to their respect. Neelam is thankful to them for thinking about their respect, and tells that their respect will be ruined again because of Lakshmi. Dadi asks Kiran to search malishka, but not to drag lakshmi’s name. Kiran tells that lakshmi’s name is involved and Police will locate it. Shalu comes there and hears Neelam asking Abhay to call Police. She greets them.

Dadi sends her to Lakshmi and tells that if Lakshmi proves innocent the she will questioned them who has ruined the family’s respect. Shalu asks Lakshmi to sit and tell her.Lakshmi tells that Malishka is kidnapped and Kiran aunty is thinking I have kidnapped Malishka. Shalu asks why she was asking for forgiveness and you can’t do anything wrong. She asks her to tell, else they will think her wrong. Lakshmi tells that she has promised someone and can’t tell anyone. Shalu asks her to say, tells that she is her sister. She asks whom you have promised? Lakshmi takes Ayush’s name. She tells her that Ayush did someone’s accident yesterday. Shalu asks how is he? Lakshmi says he is in trauma and unconscious. She calls Doctor and comes to know both Ayush and the guy are fine. Lakshmi tells that Ayush was drunk and driving and that’s why worried.

Shalu tells that they shall tell Rishi. Lakshmi refuses to let Rishi know and says he was awake all night to make presentation. Lakshmi tells that Ayush was sad and had fainted. Inspector comes there. Shalu tells Inspector that Lakshmi iis innocent and can’t do anything wrong. Inspector asks where was she? Lakshmi tells that she had gone for important work. kiran says I am sure you have kidnapped her. Lakshmi says she didn’t do anything. Abhay asks Inspector to arrest her and interrogate her to unveil all her secrets. Shalu asks what is he saying? She asks if someone say such things for your daughter. Abhay asks how dare you? Shalu asks him to stay in his limits and asks him to go and enquire about malishaka. Kiran gets angry. Lakshmi says I am telling truth.

Kiran tells that Lakshmi is not trustable. Shalu tells that everyone will repent, whoever will know the truth. Kiran raises hand to slap her. Inspector stops her. Neelam asks Shalu to leave, and pushes her out of the house. Inspector asks Lakshmi to come with him. Lakshmi says I haven’t done anything wrong. Inspector requests her. Lakshmi asks Dadi to tell that she is innocent. She tells Abhay and Kiran that she is innocent and cries. She asks them to trust her. Inspector asks lady constable.

Malishka shouts for help and coughs, she is tied to the chair. Inspector brings Lakshmi to Malishka’s room. They find earring. Kiran tells that it is of lakshmi. Neelam confirms. Malishka shouts Lakshmi, why did you kidnap me? I just wanted to get Rishi and love him. She says I will not get Rishi. Everything is recorded in the camera, as per planned. lakshmi tells Inspector that she has not come here. kiran tells neelam that Lakshmi is lying. Neelam tells that she just lies. Abhay asks Inspector to take action. Inspector is sure that she has kidnapped her.

Reviewed Rating for Bhagya Lakshmi 17th November 2022 Written Update Lakshmi arrest?: 3/5 This rating is solely based on the opinion of the writer. You may post your own take on the show in the comment section below.