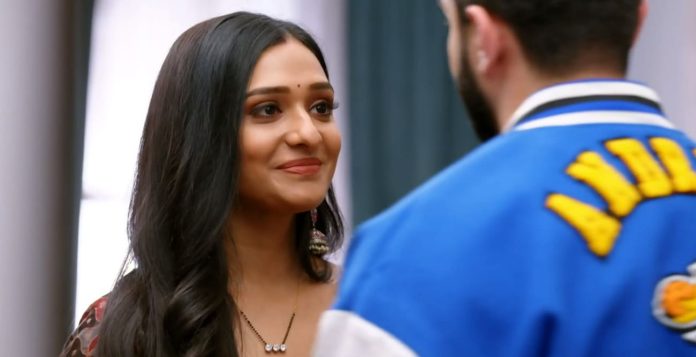 Bhagya Lakshmi 9th December 2022 Written Update Lakshmi’s accident Karishma gets enough hearing of Lakshmi’s praise. She wonders when will Lakshmi leave from their house. She shares her bitterness towards Lakshmi with Malishka. Malishka tells that very soon Lakshmi will be out of the house and their lives. Rishi and Lakshmi have a cute moment. Rishi tells her that he will go to office and also take the tiffin along. She asks him to say that he will go and come. Rishi tells that he didn’t go, he has come back. Lakshmi realizes that Rishi forgot the tiffin. She decides to take the tiffin for Rishi to his office and surprise him. She takes the tiffin and leaves from the house.

Meanwhile, Sonal and Malishka meet Ashish. Sonal shows him Lakshmi’s picture. She asks him to hit Lakshmi by the car and make their conspiracy appear an accident. Ashish finds Lakshmi walking in the middle of the road. He tells that he can easily accomplish the goal. Lakshmi buys a bouquet for Rishi. Ashish speeds his car to knock down Lakshmi. Will Lakshmi meet with an accident? Keep reading.

The guests make a leave. Kiran asks Sonal and Malishka what are they doing, Lakshmi has got more close to Rishi. Sonal asks Kiran to keep patience. Priyanka asks Lakshmi to take care. Lakshmi asks her not to tell anything, else the family will worry. Sonal keeps an eye on them. Virender sings Lakshmi’s praise. He feels proud and lucky. Neelam tells that they know Lakshmi’s truth, Lakshmi isn’t a great person. He tells that he regards Lakshmi a part of his family, while Neelam always misunderstands her. She tells that very soon Lakshmi will become a curse for the family. Rishi cheers up Lakshmi.

Rishi asks Lakshmi why is she worried. She tells that she is just tired. He doesn’t believe her. He asks her again why is she appearing worried. He wants to know the truth. She asks if he doesn’t trust her. He tells that he knows her well, he doesn’t trust her in this matter, she doesn’t tell anything to others so that they don’t worry, he can feel she is worried. He asks her to say it. He tells that she isn’t telling him and making him worry more. He will feel he is a bad husband that he couldn’t solve her problem.

On the other hand, Malishka remembers her moments with Rishi. She tells that she is missing her old time with Rishi, she is happy that they both danced like their old times, she loves him a lot, she wants him in her life. Sonal asks her to be positive, she will soon get Rishi. Rishi insists Lakshmi to tell the problem. She tells about Priyanka. He tells that Priyanka is a nice girl, she is getting tarot card reading training, she is learning the art. She thinks not to take Priyanka’s words seriously.

She lies that she was missing Bani and Shalu. Rishi asks her to call her sisters and talk to them. Lakshmi calls Shalu, when the latter thinks of calling her. Shalu tells that they are connected by heart. Lakshmi tells that she was also missing them. Shalu and Bani have an emotional talk with Lakshmi. Lakshmi asks them to take care and sleep early. Bani teases Shalu about Ayush. Shalu misses Ayush. Lakshmi prays that the family stays safe from all the problems. She can’t see her family in trouble. She wishes that her family is protected from every sorrow and danger.

She tells that she is ready to tolerate anything for the sake of her family. Ashish meets Sonal and Malishka. Malishka learns about Ashish and Sonal’s relation. She thinks Ashish is Sonal’s husband. Sonal tells that Ashish is her boyfriend. Malishka tells that Ashish will do their work. She shows Lakshmi’s picture. Ashish tells that it’s an easy target, but Lakshmi has to come out of the house. Ashish romances Sonal. He assures that he will do the work.

Sonal hugs Malishka happily and relieves her stress. She asks Malishka to ask Kiran to get a wedding date. Kiran overhears them. Dadi asks Lakshmi if she will come with her for an outing. Lakshmi asks Dadi to command her instead asking, since she is elder. Dadi feels happy and practices the command. Lakshmi asks her to command her sternly. Lakshmi laughs and calls Dadi cute. Kiran asks Sonal and Malishka what are they hiding. Sonal tells that there is nothing to share.

Malishka gets scared that they are doing wrong. Sonal asks her not to feel guilty, if they don’t do this, then there is no way to get Rishi, she can’t separate Rishi and Lakshmi. She tells him that she has done the same thing with her friend, she is living a good life, she has love with Ashish and gets money from her husband. She tells Malishka that nobody knows about her secret lover. She asks Malishka to think if she wants Rishi with her forever. She lets Malishka decide. She thinks Malishka is an idiot, one has to snatch love. Dadi asks Lakshmi to accompany her. Karishma tells that she will take her mom. Dadi asks what’s the problem if Lakshmi is coming. Karishma asks Dadi if she likes Lakshmi so much.

Malishka wants to stop Lakshmi from going out, since Ashish is waiting for her. She asks Lakshmi to respect Karishma and let her go with Dadi. Lakshmi asks Dadi to go with Karishma. Karishma tells that she has a right on her mom. Dadi defends Lakshmi. Karishma thanks Malishka for supporting her. Malishka tells that Lakshmi will leave soon. Lakshmi leaves her worries. She knows everything will get fine. Rishi asks Lakshmi to stay happy. He doesn’t like her when she stays upset. He asks her to smile. She asks him to take the tiffin. Rishi tells that he will take the tiffin. He teases her asking for a hug and kiss. He tells that he is just joking. Lakshmi and Rishi have a cute moment.

Reviewed Rating for Bhagya Lakshmi 9th December 2022 Written Update Lakshmi’s accident: 4/5 This rating is solely based on the opinion of the writer. You may post your own take on the show in the comment section.