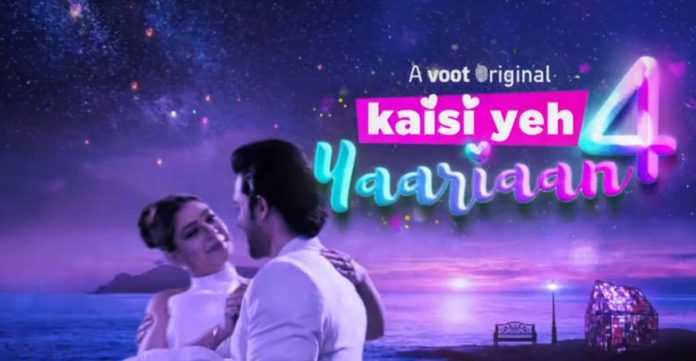 Kaisi Yeh Yaariaan 4 Monster Episode 2 Written Update The news spreads about Manik’s comeback. Space Academy Goa also gets famous because of Manik’s opening performance. Manik tells that his show will be a hit anyway, he is a social media influencer. He waits for Nandini’s call. Nyonika appears there. He tells that Dushyant is related to her, she is owning a pet again. She tells that she is the stake holder in the Space academy, she can destroy him anytime, he is just a loser since Nandini left him, so he didn’t know about his investors. He tells that its funny, she becomes a mom by showing him the mirror, he is nothing without Nandini, but sorry, he isn’t a loser. Nandini tells that they are leaving.

Rishabh blames her for not wishing his admission. She tells that she already spoke to Manik, who refused to her. He asks her to try harder. She tells that they got the tickets. Rishabh panics. He refuses to leave. He asks her how can she give up on his dreams so soon. He requests her to talk to Manik well, instead of fighting him. He tells that Manik was the only one good in her life. He doesn’t listen to her reasoning. Rishabh gets too smitten by Manik’s Space Academy. He gets amazed seeing the Academy. He meets Latika there. Latika is also Manik’s fan. Rishabh tells that he is trying to get admission in the Academy.

They become friends. She tells that they will find Manik. Nandini is still disturbed. She visits a church in search of peace. Manik reaches the same church in search of her. He finds her keeping silence. He remembers their relationship. She asks him how did he know about her location. He tells that their hearts are connected forever. She finds out that her location was shared with Manik. She taunts him and deactivates the app. He tells that he knows she always visits the church whenever she wants to think.

Both of them try to wash off their bitter memories with tears. Their phone get exchanged. Rishabh calls Manik and appeals to him for an admission. Nandini tells that she is on call. Rishabh asks her is she with Manik. Manik answers a call on Nandini’s call. He gets to hear from her boss Omkar, that Nandini isn’t on her job. He tells that he got Nandini’s phone by mistake, he will pass the message to her. Omkar asks him to convince her for the space travel mission. He remembers Nandini’s dream. Manik and Nandini try to unlock their phones. Manik reaches the inauguration event. Nandini rushes to board the flight.

Manik attempts to crack the password. He enters Monster and unlocks the phone. He slips into his past memories. He meets Nandini, who reaches there to return his phone. She tells him that she kept the password Monster so that she remembers that he is a Monster. She rebukes him. Manik gets heartbroken. He pinches her and realizes that she is there for real. He tells that they are done, she is free from his clutches, she can go back anywhere she wants. He hands over her phone and goes for the concert. He stays disturbed because of Nandini’s hurtful words. Nandini watches Manik losing his stability. Nyonika is glad to see Manik as a loser.

Nandini takes charge and comes on the stage to sing with Manik. Manik and Nandini perform together, much to their fans’ amazement and Nyonika’s shock. The concert gets a successful start. The reporters ask the reason that Manik didn’t sing. Nandini gets introduced as an integral part of the academy. He asks them to focus on the performance. Nandini takes Manik to the green room. She asks him why did he freeze on the screen. He tells that she feels he is a monster. She tells that he couldn’t sing because of their memories, it was all his guilt. He asks her to stop it. He tells that he is going to hell. She accepts his deal. She tells him that she will come to him till the morning. He asks her if her fear is making her say this. She tells that she has decided it by thinking well. He asks why is she coming tomorrow. She asks him to be happy with what he is getting.

Reviewed Rating for Kaisi Yeh Yaariaan 4 Monster Episode 2 Written Update: 3/5 This rating is solely based on the opinion of the writer. You may post your own take on the show in the comment section.