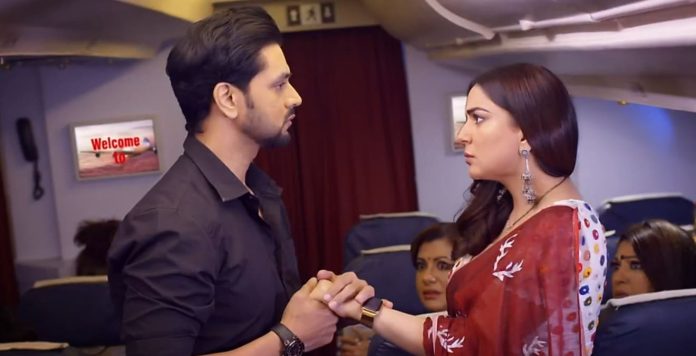 Kundali Bhagya 22nd December 2022 Written Update Hijack twist Preeta holds Karan’s hand during the take-off. Rakhi and Kareena also pray. A newly married couple is also in the flight. They are excited for their trip. The goons signal each other. They go to trouble the air hostess by their demands. They send her away. They get their guns. The air hostess return and find them with the guns. They threaten her and tell that they have hijacked the plane. Kavya asks the man why is he moving his foot. He tells that he is okay. The man realizes that he has less time and wishes he lands soon. Kavya tells Preeta that she wants to go to washroom. Preeta asks her to be careful. Kavya identifies Karan, even in his disguise.

He tells that he isn’t the one she is thinking. She asks him to tell her the truth, then she will give him a sweet hug. Karan tells her that he really missed her. He hugs her. He asks her not to tell the truth to Preeta. She tells that everyone is scared of Preeta. He tells that he has seen Preeta helping the needy, she has a golden heart. She tells that she will go now, because she is also scared of Preeta. Karan kisses her. She goes back to Preeta. A man gets disturbed by the married couple’s sweet talks and goes to occupy the seat beside Karan’s seat. Kavya asks Shrishti not to talk to anyone else.

Rakhi tells that Kavya is just like Karan, she can’t share love. She asks Shrishti to not upset Kavya. Karan removes his disguise and goes to Preeta to express his love. He tells that he doesn’t know he is doing right or wrong, he should get angry on her after what she did to him, but even then he loves her a lot. He doesn’t know why he gets drawn towards Preeta all the time. Karan dreams this. He gets to senses and decides to control his emotions. Rishabh remembers Anjali’s words. He suspects Anjali. He goes to Arjun’s house to check his presence. The terrorists threaten the air hostess. Kareena gets hiccups. Rakhi tells that Bani would be missing Kareena. She explains the logic behind it. Preeta goes to get water for Kareena.

Rishabh visits Arjun’s house. Anjali tells Dadi that if Rishabh fails in getting the bank loan, then he will come on the roads. She checks the door and finds Rishabh and Sameer there. Rishabh and Sameer greet Dadi. Rishabh asks Dadi didn’t she feel happy seeing them. Dadi tells that she has a bad mood. Sameer tells that they will cheer her up. Rishabh tells that they have come to meet Arjun. Dadi tells that he has gone out. Anjali tells that Arjun will come late. Rishabh tells that he is free, he has much time, he will wait for Arjun. Anjali tries to get rid of them. The terrorists don’t find the bullets. They look for the bullets, so that they begin their hijack plan. Preeta reaches there and gets scared seeing the terrorists. She also gets caught by them.

Reviewed Rating for Kundali Bhagya 22nd December 2022 Written Update Hijack twist: 5/5 This rating is solely based on the opinion of the writer. You may post your own take on the show in the comment section.